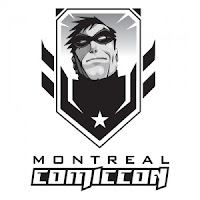 Today is the start of Montreal Comic Con which, while smaller and not connected to Comic Con International (you know, the *big* one held in San Diego), has exploded since its inception a few years ago. As a convention celebration comic books, graphics novels, great movies and television focusing on the sci-fi, fantasy, and other alternate genres -- it has a unique spin from other similar conventions. It models itself very much on Comic Con international in many ways but because of the cities bi-lingual nature, offers programming in both English & French.

I'm very excited to be going today and, this actually makes it my first. Deluxe Weekend passes and a couple of photo ops have already been paid for along with other ticketed events. This years honored guests are William Shatner and Patrick Stewart but you also have a host of other interesting and fun guests of all sorts including Malcolm McDowell, James Marsters, Wil Wheaton, Brent Spiner, Kevin Sorbo (and the list goes on...).

I've made a point to take a good long look at the schedule to determine what I most want to see and a few secondary choices should scheduling and over capacity end up hindering my weekend. It will be a fun, though perhaps costly, weekend.

If the time permits, I'll post more about some of the interesting things I see or do later. Please note that my Weekend R&R series will be delayed a few days. :)