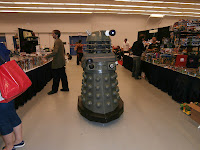 Well, I had a blast at this year's Comic Con in Montreal and got to see a bunch of great things, meet a few icons, and have some fun and squeeze in a bit of board gaming as well!  Aside from the occasional lines and the packed areas on the weekend, it gave me a chance to indulge in a bit of everything that Comic Con had to offer. My love for Science Fiction, Comic Books, Gaming, and Horror all were satisfied in one way or another.  The cosplay was also pretty awesome! 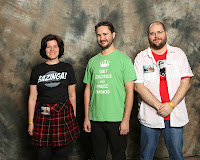 Highlights included meeting William Shatner and Patrick Stewart though these were brief encounters.  I also made a point to get Shatner to sign something but that was also very brief.  On the other hand, Wil Wheaton was pretty great and very personable.  We had pictures taken with them all on Saturday and I decided to get an autograph from Wil Wheaton the following day.  At first, I toyed with the idea of getting him to sign my PHB for Castles & Crusades as a fellow gamer but that was before we had the picture taken.  So instead, it only made sense to get him to personalize and sign the picture of the three of us together.  To protect the picture, I kept it in the PHB to prevent any damage and, when I pulled the picture out -- it was the book that proved to be a great conversation starter.  You see, he is also a fan of the game because of the 'old school feel' it gives while keeping with the streamlined d20 mechanic.  We briefly talked about our love for AD&D and how he played it when he was younger but how revisiting it years later, the 'fiddly' bits seemed much more apparent.  He relayed that it probably had a lot more to do with how we all probably ignored or just house ruled aspects of the game and focused on the pure enjoyment of it.  Playing Castles & Crusades is the closest to experiencing the 'feel' of gaming that he remembers so fondly (like so many of us).  I couldn't agree with him more.

Of course, hearing others like Malcolm McDowell speak was a fantastic treat and I also met Mike Magnola (creator of Hellboy).  What I didn't quite expect was meeting Tom Savini.  Late in the evening while most we either at the Steampunk Mixer After-party or the 'Hardcore Nerdism' Comedy Show, the wife and I went to see 'Smoke & Mirrors: The Story of Tom Savini'.  We were coming out of the game room but the movie/documentary had already started so the room was dark with the exception of the projector screen.  We took a couple of seats and enjoyed the documentary very much.

As a kid, I used to watch a lot of blood/gore movies and Savini was pretty much a household name in connection with the genre.  A friend and I used to look over the issues of Fangoria and, of course, we were both hopeful that someone would eventually do a Freddy vs Jason movie.  I mean who knew that would actually end up happening so many years later, right?  At the time, while there were many that he was involved with that I liked and thought was 'cool', one of my favorites was Creep Show.  I can't remember when I first saw it but it was a few years after it was released.  I was probably 13 when I saw it for the first time.  Tom Savini was the guy that did all the makeup and special effects and is best known for this type of work.

Well, the lights came back on at the end of the movie and walking to the front was the man himself.  I knew he was at the Con but I didn't know he was going to be at the screening.  The great part of all of this was the fact that we may have been a total of 20 or so people which made his chat afterwards much more casual and open.  People there were people genuinely interesting in the work he did and he opening asked for thoughts and criticisms on the documentary (not yet in a finished / final form). 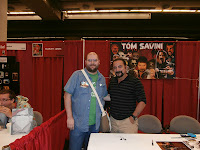 I made a point to meet him again the following day, get an autograph and thank him for his work and commented on how much I enjoyed 'Smoke & Mirrors'.  I also got a picture taken with the man at his booth.  On the one hand, Montreal was a smaller con compared to others of this type so his booth (and Mike Magnola's for that matter) never drew huge crowds.  For that, I have to say I'm a bit disappointed.  Then again, I might have not gotten the same opportunity had it been much larger.

Fandom is an interesting thing and, I met people of all types.  Everyone seemed to be very pleasant though and I got a chance to meet and talk to a bunch of strangers -- people who simply enjoyed many of the same things in a lot of cases and, while at the con, we were also all friends in a way.  It's kind of the same sort of comradery you can find amongst gamers and it's great to share a passion or hobby.

As for stuff... well as anyone who goes to these knows, every kind of convention like this acts as a blackhole when it comes to ones finances.  Aside from the professional pictures taken with Shatner and Patrick Stewart and a few signings here and there... the wife and I came back with some T-Shirts, comic books, artisan jewelry and apparel, some prints, and a couple sets of Game Science dice.  Found a new distributor based in Montreal that started up which carries the line.  I made sure to get the business card to suggest a couple of local games stores to contact him and start carrying the lines he distributes -- like more GAME SCIENCE DICE!  I only picked up two sets (I would have picked up more if they had the color I was looking for) but would love to increase those numbers.

Of course, as someone who runs and plays games, it'll be hard to give up the set I currently use.  Natural 20's and 1's seem to come up with a bit more frequency than some of the other numbers (that chessex tumbling process again.  Given that the 1 comes up as often as the 20 does, others don't seem to mind as much but it has resulted in the death of a couple of my characters as well as the death of many a critter and, well, other player characters.  But, the Game Science dice will look 'bitchin'  once I've inked the numbers.  ;)