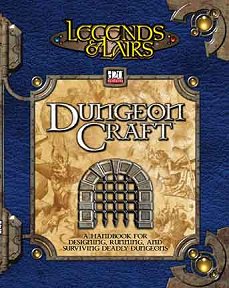 Several months ago, I kicked off my (mostly) weekly series of the 'Weekend R&R' posts -- my Retrospectives & Reviews of various gaming books and things.  The first post was "Cityworks" which was part of the Legends & Lairs series of d20 books publishing by Fantasy Flight Games in the d20 boom.  You can check it out HERE.  I've always had a soft spot for these particular books over most other d20 books by various third party publishers for a few reasons.  I find that they are practical and, despite some of the invariable crunch you'll find, it seems to be less about mechanics and more about crafting one's campaign.  It also helped that I got all these books for a steal when the publisher decided to clear their stock!  :)

It should be no surprise that a book titled "Dungeoncraft" deals with dungeon oriented campaigns and, as with other books in the series, it follows a similar format from book to book.  The first chapter deals with characters -- how your various classes / archetypes can play out in the dungeon environment, new prestige classes suited to this environment, and of course some new feats as well.  There is material written on equipment, both new and old as well as their uses and some further considerations of being in a dungeon-type environment for extended periods of time.  All this material takes up 37 pages.

The second chapter is simply entitled 'Magic' and offers new spells and items which are, once again, suited to the book's theme.  Pretty standard fare.

The third chapter is more interesting and is entitled 'Dangers'.  A few pages are devoted to what are termed Environmental Hazards -- explanations and samples are given.  Guidelines are also given to create your own but just the samples alone will be of cruel inspiration to the enterprising GM.  You have some new monsters but, more interestingly, is a section dealing with wandering monsters and encounters with some simple system alternatives to give variety to the standard 1 on a d6 check or the like.

The fourth chapter is where some of the fun begins for someone who wants a system to help them design something.  A simple but robust system is provided if someone wants to basically roll a dungeon up but there is advice given as well.  The system is also modular enough to use only parts if one chose to or they could ignore that completely and consult the chapter for some of the detailing and stocking.  There is a nice section on Monsters which examines reasons for them to be there and provides helpful tips to being more cohesion to the placement of these denizens as well as the social geography of your complex.  This chapters also has some ready to use monster tables and rules for monster morale, and a section on traps.  This chapter draws to a close by offering several dungeon templates as well as a section dealing with dungeon-themed campaigns.  Chapter 4 is the gem of this book and is 75 pages.

The final chapter takes what was touched upon in Chapters 3 and 4 to craft 'Encounters' -- unusual rooms / areas / challenges which are ready to be taken right from the book and dropped into your campaign.  The appendix which follows are a handful of tables which is then followed by a basic index.

The book is 172 pages in all and a decently considered and written book.  There have been several others of course, including one by WOTC but I prefer this one above other d20 publications on this subject.  Actually I do prefer it to the Dungeoneer's Survival Guide from 1st Edition but they are both very different when you consider their respective contents.  I prefer to think as them complementing each other.

The book is, not surprisingly, out-of-print but if you were to try and track a copy down, it wouldn't be that hard or expensive.  At Noble Knight Games, there are a couple of used copies for about $10 (NM) which is a good price for the book.  If that's too rich for you, a PDF copy on RPGNow! is half that and can be yours for a mere $5.