The Problem With Gygax Magazine 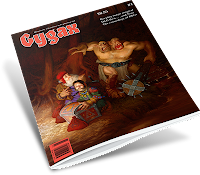 I loved Dragon Magazine.  When I discovered D&D, the material my friends and I had on hand in our younger days was a bit hard to come by.  The only thing harder to come by at the time was the dice needed to play.  My friends and I were military brats and our families were living in Germany at the time.  But we did have some of the books and the local bookstore on the base did carry a very small amount of gaming material (well, honestly the gaming material was pretty much restricted to TSR material).  However, the local highschool also carried a variety of magazine subscriptions and, among them was Dragon Magazine.

While between my friends and I, we had a handful of books, we all were able to check out the newest issue of Dragon and back issues as well.  Thanks to these back issues, we had a wealth of information at our fingertips ... ideas... options... and most importantly, inspiration.  The magazine ads were just as cool as some of the new monsters, items, and spells one could find going month to month.

Frankly, my love affair with Dragon Magazine came to an end as it approached it's 200th issue but at that time, I was staring to set AD&D aside having grown increasingly dissatisfied with the game and the direction TSR was taking.  However, when I was an avid ready of the magazine, I also distinctly remember the things that appealed to me the most in those early years.  They were, in no particular order, options and classes for my AD&D game, monsters, spells, and magic items.  In other words: Stuff I could readily use and just dump into my game!  Interestingly enough, the articles like monster ecologies, short stories, and how to be a better player or game master just had no appeal to me.  To be fair, those were the articles I would come back to and appreciate at a later time -- in some cases MANY years later.

Now for those familiar with the look and feel of the classic Dragon Magazine, the new Gygax Magazine will look instantly familiar -- almost hauntingly so.  If you loved it, you'll love the new one.  It's as if classic Dragon never left and never changed over the years.

And maybe that's the problem.

While there is support for all sorts of games -- both old and out of print as well as new, and the sort of articles that many gamers will enjoy, the new Gygax Magazine has challenges that the old Dragon Magazine never had.  You see, the reason I looked forward to the kind of material in the old Dragon magazine was simply because, outside of TSR and what you or your friends cooked up, there really wasn't much access to material to use.  Dragon Magazine was there to give you 'more' than what the books you had already gave you.  There was no OGL and there was no internet.  There were no blogs.  The closest was unofficial newsletters from gameclubs and hobbyshops where enthusiasts shared ideas and material.

I will say that looking at the table of contents, I personally find there are a few articles I wouldn't mind reading and I'm certain I would enjoy the magazine overall.  However, some of these topics sound like the sort of blog articles I also have enjoyed in the past.  As for game crunch related stuff, this will be a hit or miss depending on how broad or narrow they choose to be as far as game system coverage is concerned.  Kobold Quarterly was willing to accept and publish for a great many systems but invariably, it was typically showcasing 4th Edition D&D and Pathfinder.  It will be interesting to see the material trend in Gygax Magazine but in any case, there is a lot of third party material out there for all these games -- tons of it.  A lot of it free too.

At the end of the day, the new magazine has some competition even if nothing is competing directly against it.  The magazine DOES look great though, and if it wasn't for the high price to get an issue to Canada, I'd probably would have ordered a copy.  As it stands, I had two shipping options... the cheapest would have cost me close to $15 to get a copy of the magazine though it's far better that in a Priority Mail International Envelope where it would cost me $20 just for the shipping!  My hope is the PDF option, once available in a week or two, is affordable (not much more than half the cover price of the print edition) because I'd happily buy the PDF for $4.50 an issue and subscribe digitally at that price.

If you want to buy a copy of the magazine... you can do so HERE.