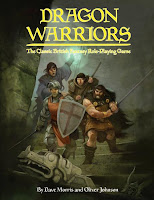 My last Weekend R&R post was a few weeks ago thanks to the hustle of the holidays but given that the focus of my last review concerned 'Advanced Fighting Fantasy', I thought it fitting to follow up with the 'Dragon Warriors' RPG which got reprinted a few years ago in an attractive hardcover.

Dragon Warriors has its origins in the mid-80's and was very much influenced by the Fighting Fantasy books and, to a much lesser extent, the continuing popularity of Dungeons & Dragons.  Dragon Warriors is very much a rules light game and conveys a very 'Dark Ages' view of Fantasy.  This is promotes the idea that rare encounters with the fey could be very dangerous and, unlike other fantasy worlds, meeting a dwarf or an elf wasn't as simple a thing as just wandering to the local tavern.  Dragon Warriors is the  definitive 'British Old School RPG' and is both rules light and an enjoyable treat.

The system is a class-based game where characters are further defined by 5 attributes (Strength, Reflexes, Intelligence, Psychic Talent, and Looks).  The classes themselves provide the player an array of basic archetypes to choose from and play, much like Fighting Fantasy and other rules light type games, is fairly simple.  Once again, simple does not mean inferior here.  The various character classes have a variety of class abilities and features to further distinguish one class from another and the book does a nice job of providing a functional rule set to play and enjoy.

The system is simple enough -- most tasks such as climbing for example will require a d20 roll where a roll equal to under the relevant ability to succeed.  Combat is also fairly straight forward, with an additional caveat.  After determining whether you hit or not, you roll to see if you get through the armor.  If you do bypass the armor, only then do you deal a fixed amount of damage (based on the weapon rating).  Compare that to just seeing if you hit or not to then rolling for damage or even doing this but just factoring a damage reduction once damage is rolled.  That said, it does work.  When a character increases in 'rank' (aka level), aspects of the character will improve such as hit points but not by any large degree.  A Knight of 5th rank will only have 4 more hitpoints than what they started with at first level.  This means that combat can quickly become gritty and deadly.  There are also variant rules where damage can be variable instead of fixed, more critical hit opportunities as well as permanent injuries, and lastly, no actual increase of hitpoints beyond 1st level.

Magic is also pretty basic ... spellcasters have a pool of magic points and no caster can cast a spell which is above their rank.

Overall, the book also provides a section of game mastering, an setting to play with and various relics, a bestiary, and an adventures to get a campaign going.  Tons of material which is actually an entertaining read in itself all go to fill this 255 page book.  Since the book was initially reprinted in 2008, the license changed hands and it can be readily obtained in PDF or hardback through RPGNow HERE.  The price here (discounted at $34.99) is better than the price the previous publisher (Flaming Cobra/Magnum Opus Press) had it for $39.95 -- plus the updated book had the errata integrated as well.

The book is certainly more about feel and substance than just a set of rules and I think this really goes a long way to enrich the game.  It's nice to pick up a game book that gives you the desire to want to play it and I think Dragon Warriors does this well enough to at least take a look.  Given a choice between 'Advanced Fighting Fantasy' and 'Dragon Warriors', I personally prefer Dragon Warriors though both convey a great sense of nostalgia when looking through them.