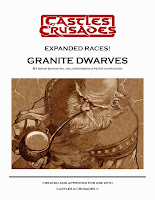 About a week ago, I wrote up a small review on a new digital release for the Castles & Crusades RPG called 'Fantasy Races Unlocked - Kobolds'.  Personally, I think there should be an exclamation mark at the end of the title because Kobolds, like Goblins, are freakin' awesome.  That said, I found this small gaming aid a very good start of what could be a promising series and I had heard there was something in the works.  Imagine my surprise when the new installment was made available.  The second in the series is 'Fantasy Races Unlocked - Granite Dwarves'.

Ok... I know what some of you may already be thinking.  It might be something along the lines of, 'What... more dwarves?  What makes these different and why should I care?'.  Ok... maybe nothing as harsh as that but, you get my point.  I was understandably curious and wondered what kind of angle would present this self with this new gaming aid.

Well, when I went through this title, I wasn't disappointed.  Actually I am really excited about it and I think that this is a solid step forward in the series.  It continues in the excellent direction that the first one takes and offers a bit more in the process.  And, damn it... I want to play a Granite Dwarf!

As I mentioned in the review I did for the Kobolds release, I have a soft spot for this kind of accessory as it reminds me of The Complete Book of Humanoids published by TSR.  As a fan of C&C, I was happy that the it, much like this one, followed the format of the races as presented in the Players Handbook.  Now, without going into a lot of detail for these types of dwarves, know that their environment is much colder, harsher, and unforgiving than what a regular dwarf is accustomed to.  Think of a boreal or sub-arctic environment.  You can safely put those stone carving notions of the traditional dwarves aside and while they share many racial traits, there are new ones that stand out.  And, like the previous accessory, you have some Alternate/Optional Racial Traits listed that you can swap one of these for a standard one.  This is a feature I love the most about these aids as it gives a bit more diversification beyond what one may expect from a game like C&C.

Where this accessory stands out from the previous release is the addition of a bit more material.  You have sample characters, encounter information, a new creature, and a couple of new items.  The sample characters provided come in the guise of a typical, 1st level fighter and a typical, 5th level cleric.  The encounter guidelines help supplement the information already provided in the aid but also introduce the 'Frigid Goblin'.  A complete stat-block is provided for the goblin in the familiar C&C format.  The new items are simple but interesting with just enough flavor text to make them enticing to what to introduce them in a game.

While this new gaming aid is a notch up in terms of value for the potential buyer (it is also selling HERE are RPGNow! for a mere $2), there is a singular limiting factor with this accessory and that is the region where these dwarves are likely to be used in -- at least at first glance.  I think the Granite Dwarves can be adapted easily enough to fit other environments or settings and this is, at the very least, a great example of a template to follow.  All you need is a bit of imagination. 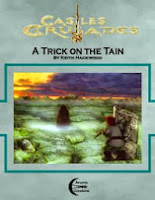 Of course, the reason I was excited was the realization that they could be fit in as-is to the region outlined in 'A Trick on the Tain', a C&C module Arcana Creations put out about three years ago and recently released as a Swords & Wizardry conversion on RPGNow! just yesterday.  With that in mind, I quickly contacted Christina Stiles and we have decided to create a bundle on RPGNow! that combines both the Granite Dwarves gaming aid along with the original C&C version of 'A Trick on the Tain'.

If you are interested in just the Granite Dwarves release, you can find it HERE but if the idea of the aid bundled together with an adventure appeals to you, you can find the bundle HERE for $5.50 in PDF.