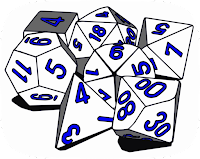 One of the things I have come to be very happy with when I began the layout work for this Ballista line of adventures is the approach I took in breaking down the information and the nature of the stat blocks. I will not claim this as some sort of break through, but a clean and uncluttered layout and ease of access to find and use this information was of the utmost importance to me. Cleanliness is next to godliness, or so they say, and now that I have three titles complete with another two on the way, I am appreciating the final result more and more.

Naturally, it won't be for everyone.

The layout for any of the adventures produced in the Ballista line is such that a page has a two column set-up but the size of each column is different. The smaller column found is found on the exterior edge of the page and is intended for the creature stat blocks, relevant item stats, or hazards such as traps. This information is concise in nature but complete and are in an italicized font to further distinguish it from the text in the column next to it. The larger column on the page is the text of the adventure itself. Any tables found in the adventure (random encounter tables for instance) are also in the main body but the table itself is kept fairly minimalist in style.

When the main body of the text makes reference to a monster or trap, you can find the stats for that along the side of the page. If a particular creature is used frequently in the following pages, repetition is kept to a minimum unless they reappear in a different section. At most you may have to flip back a page or two to easily find what you are looking for.

Here is an example from the Secret of Ronan Skerry: 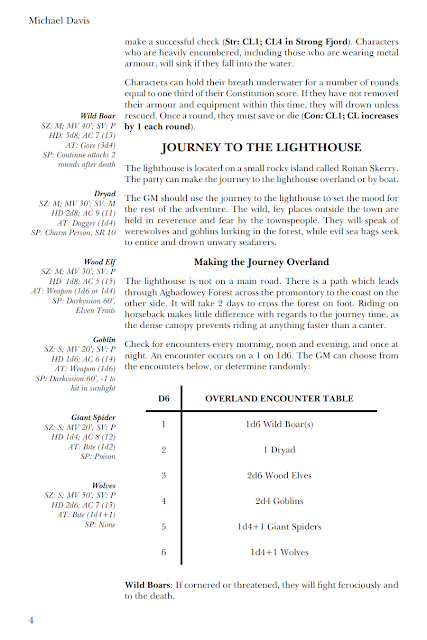 The Stat Blocks themselves represent an attempt to bridge to popular d20 systems together for the principal purpose of ensuring compatibility with Swords & Wizardry and Castles & Crusades. This is possible since both games are streamlined and simple in their approaches. As such, you'll find the Stat Blocks in Ballista which contain both ascending and descending armor class numbers as well as Save type or, to borrow the terminology from C&C, prime attributes. Beyond that, the Stat Blocks are detailed enough to run the encounters along with which ever preferred ruleset you choose to play with the Ballista material or the base Ballista rules themselves.

They all follow a simple format providing the name, Size, Movement, Saves, Hit Dice, Armor Class, Attack, any other Special info and Spell Resistance if applicable. Several examples are found on this page due to the accompanying encounter table and, Ballista tries to keep things relatively simple and in the GMs control. For example, if you consider the Giant Spider listed on the page is poisonous, it will does not inform the GM of the effects. Instead it relies on the GM to decide on the outcome should a character be bitten (and fail their saving throw vs poison). It is *YOUR* game after all.

As you may have also noticed, on the page, you have text in bold (in brackets) regarding checks. Not all systems, or even GMs, will need this sort of thing but it is there just in case. CL refers to Challenge Level which is always measured on a scale of 1 to 10 in Ballista.

The intent behind all of this is to keep things simple and VERY compatible to other existing and popular FRPGs even if we use both Swords & Wizardry and Castles & Crusades as a baseline for certain things. It just makes things easier and, given that Swords & Wizardry Complete has been made completely free in electronic format, and you can find a fairly complete set of starter rules for a game like Castles & Crusades, it seems foolish not to use these as references when they are so readily available.