The Question of Memorials 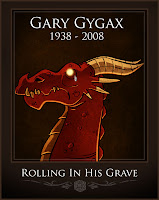 I began writing this article a couple of weeks back but things got busy and I wasn't entirely sure if I wanted to continue this post... Upon reflection, I've decided to post it 'as-is':

I briefly considered giving the title of this post a slight different one given the post a friend wrote over on his blog, Raven's Keep.  Common sense prevailed and I decided to keep the tone light.  There was a bit of exchange over on the Dragonsfoot forums when people were talking about the AD&D reprints which have a percentage of the proceeds going to the Gary Gygax Memorial fund.

A moderator intervened before it got out of hand though and Julian wisely took to his blog to express his thoughts in a more concise manner.  He makes some good points but I don't quite agree with him on a variety of points.  Frankly, I was also concerned with the fact that he played the G-O-D card.

First off, let me start off by saying that I consider myself to be a very logical and rational man who happens loves the wonders and mysteries of universe.  I am also a spiritual person who appreciates the mysteries and miracles of the world that surrounds us.  In another time, I could have been viewed as a heretic and treated accordingly much like many other scientists and philosophers of the day.

I have no problem if people around me believe in some sort of divine entity such as God or just happen to be an atheist or simply agnostic.  These have no bearing on my enjoyment of the game created by Gygax and Arneson and the many other rpgs that followed.  I just don't think that religion should have a place in a discussion when we are talk about gaming.  Consider it neutral ground.

To be clear: I'm not talking about the question of morality or anything like that.  That's a whole different conversation.  Morality has its place and to have a campaign based on the 'good vs evil' paradigm is fine by me.  We all have our respective moral compass we draw from and we generally have similar notions of right and wrong.  We have countless stories that do this all the time and any good exploration of the works of Joseph Campbell (for starters) will discuss the importance of myth and recurring patterns at great lengths.  Religion or, rather interpretation of doctrine, has caused much grief to the earlier years of the hobby which should give us reason to keep some of that separate.

I think this is why, personally, I was initially taken aback.  I believe a person's faith is really their own though and something which is very personal.  Some people love to share their beliefs and, as a gamer, I know what it's like to want to share the hobby I enjoy so, on at least some small level, I get why some people want to share other moving experiences and connections they have.

But religion aside, let us consider Gary as a person.

Speaking for myself, I think my life is richer for the works that Gary E. Gygax have brought to us all. I don't think it's wrong for those who felt they have been so touched or influenced by the man or his works to desire a monument in his honor.

I think a monument to Gary E. Gygax is more of an inspiration and a reminder of a part of his 'good works'.  Through his writings, he has encouraged a lot of us to dream and allow for imagination to develop -- after all, the capacity imagination is probably one of the greatest gifts we will ever have.  If the monument is in Lake Geneva and only a fraction of people will ever see it up close, it's certainly no worse than other significant holy sites or places of historical importance.  As it stands, many people have visited Lake Geneva and continue to visit this place because of the influence of this one individual.  I don't think there is any danger of any of us of praying to the statue as if one were praying to a Saint (for example).

Joshua does have a good point though: While it is acceptable to respect the man and honor him by enjoying his games, if you really want to honor the man, there are other ways to do it if one doesn't agree with the idea of a monument.  A donation to one Gygax's favorite charities is still a great way to go about it: ChildFund (formerly known as Christian Children's Fund) or Fisher House were ones that he favored.  Gary was human and, while we may strive to be good, we are not perfect but we can all inspire each other for strive for greater things.

As far as suggestions of continuing to publish his works with money raised, I'm less inclined to agree.  Fortunately, some of his works do continue to be available in one form or another and with WOTC recently republishing the the PHB, DMG, and MM for AD&D as well as soon re-releasing some of older TSR material in PDF format, his works won't be completely disappearing anytime soon.  Sure, it would be nice to see Lejendary Adventures get the treatment it deserves as well as republishing anything that Gary Gygax has put out in the past and, from what I understand, it would have been his wish to see it so.  However, if and when there comes a time to get that done, there would be no issues in raising the capital for such an endeavor.  Even then, with the various POD options and other companies who all have respect for the man and his works, it wouldn't be an issue if the family really wanted to re-publish his works.  Until such a thing happens, it's probably best to leave it be in order to ensure that it gets done right when the time comes.

Now I don't write this to stir up controversy and I won't go into opinions on how the IP belonging to the Gygax family is being handled or mishandled.  I certainly don't want to get in a theosophical debate either.  It's been over four years since Gary's passing and I just think we should focus on the good times and not worry so much about what other people should or shouldn't be doing.