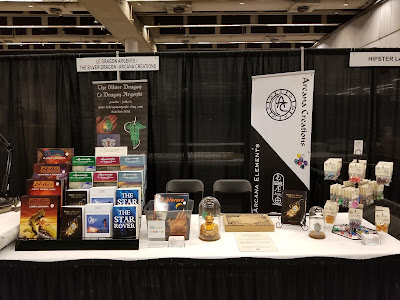 It's been a few months since the last update and I'm happy to say that almost everything so far has come to pass with the exception of one thing (more on that later).

The first fair we talked about that happened around Valentine's Day was not all that great of an event for us. While we enjoyed meeting the people that were there, horrible weather conditions, and a poor choice of venue worked very much against us. The silver lining was that we really lose any money -- just precious time.

The Beltaine fair at the beginning of May was a great success. While very small in scale, Arcana Element's release of Quebec's Distinct Paganism was a great success and we ended up selling much of our initial print run of the book. The group that sets up the fair does a couple of these each year and, so far, we've always exceeded expectations and we're looking forward to participating in the next one they set up planned closer to the end of the year.

While we attended those two conventions, we opted against doing the Festival Draconis gaming convention that happened earlier this Spring in Montreal. I was interested but as I made various enquiries about it, I learned how disorganized it really was with little to no support for anyone actually interested in vending at the convention. It did not feel like it was worth the time and energy to participate. That isn't to say that I wouldn't be interested in doing it next year but, my whole approach would have to be different.

And then came the 2018 edition of the Montreal Comic Con.

This was something of a gamble for us. Unlike other conventions Arcana Creations appeared at in the past, the price of participation as a full-fledge vendor dwarfed table costs of other shows. However, the size of the potential audience did as well. For what it was, it's almost *too* big. Add to that the fact that we were showing a few new things -- the success of which could have gone either way. Leading up to the convention, I confess I lost many hours of sleep and I feel like I'm still recovering a bit.

I went in with low expectations and set a 'minimum' threshold needed to consider doing it again the following year. I was very pleased to see that, halfway through the three-day event, we managed to cross it. What we took in paid for the booth, the deposit for next year's booth, and even paid for our additional expenses and costs incurred that weekend. It wasn't quite a break even when factoring everything in but, it was close enough given the visibility factor to both Arcana Creations, and the new things we brought to the table so-to-speak such as our new Ballista line. 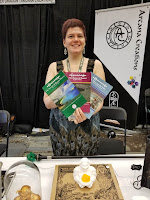 The Montreal Comic Con is where I decided to do a 'soft-launch' of the new gaming line and, while sales were a bit low -- not unexpected at this show, the reactions were very positive. I was initially hoping to have 5 or 6 releases ready for it but three of those remain in production and should be finished up in next 4 to 6 weeks. We did have three titles ready for it and Arcana Creation's original launch titles have been updated for the new Ballista line. These are, The Secret of Ronan Skerry, the Ruins of Ramat, and A Trick on the Tain.


The line's OFFICIAL launch is happening soon and will be made possible through Kickstarter. But before that happens, the remaining titles will be finished and proofs will be IN HAND before the campaign even launches. For those who followed our previous Kickstarter, Mother of Mortals, you know that we release when the final project is just about completed in order to deliver EVERYTHING promised ON TIME if not EARLIER.  There will be NO EXCEPTIONS with this new crowd funding campaign being planned.

So... the only thing that has been pushed back a bit further was the C&C release of Shaman of the Mire. Best intentions only take you so far but the lead up to Comic Con as well as the lead up to the release of Quebec's Distinct Paganism before it demanded much of my attention and overrided plans for this C&C release.  It's still coming... along with a Ballista version of it as well.  However, I won't be predicting any release date for it at this time as I am still sorting out the rest of the planned releases I had. 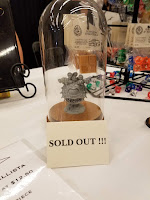 The other big bit of news contributing to our Comic Con success came in the form of a geniune Prusa i3 Mk3 3D printer. This tool was a veritable workhorse in preparation for the convention. In the weeks leading up to the con, the printer was printing up all hours of the day. Alongside with our affordable dice we sell, we started selling what I've called 'Dungeon Essentials' -- 3D printed objects which are inexpensively priced for use in your game alongside other 28-30mm miniatures. We started of with simple packs of barrels and crates and will be expanding this to other packs in the near future. We also became an authorized/licensed printer for Fat Dragon Game products and sold two particular models at the show. One of these sold out too!

The plan is to eventually offer a handful of printed goods online on arcanacreations.com as we step up to do an online store revamp to accommodate the various new additions in the coming weeks.

In the coming days, I will be writing a fair bit more here since Comic Con is behind me and I plan on giving a lot of info on what the new Ballista line consists of exactly before the Kickstarter launches. It's been a good 6 months so far this year and I'm hoping for even better in the months ahead. 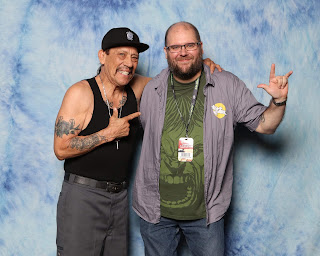