Well, a few days ago, I received a nice little package from Iron Wind Metals (after paying some more money for customs).  It is, quite frankly, rare to see a campaign ramp up and deliver on time with hardly much of a hitch.  I was delighted overall with what I got and, the package even teased the next one with a couple of free samples.  Free miniatures is a great way to get attention! 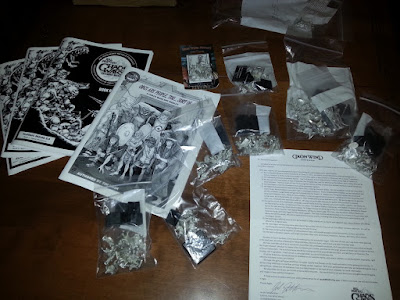 Now, I am pretty much over my head with the amount of miniatures I have yet to paint and this was largely thanks to Reaper Miniatures and a couple of VERY successful Kickstarter campaigns for their Bones line.  So, when Iron Wind Metals started up this crowdfunding campaing in 2015, it caught my interest for a couple of reasons.

Because of when I got into collecting and painting miniatures, I never got much exposure in my earlier days of playing AD&D.  A couple friends and a handful but never used them and I never saw the need for miniatures in my own games.  However, I did like the look of the miniatures the few times I checked some out.  Since I started painting a few years back, my appreciation for the look of many miniatures has caused me to pick models of all sorts.

That said, it was my decision to back the first Reaper Bones Kickstarter that prompted me to start painting my own, and in order to gain a bit of practice, I went to Games Workshop.  This in turn led me to dip into Warhammer.  Given pricing considerations and company policy, I got out almost as fast as I got in but I was left with the desire to find alternative fantasy wargaming rulesets to scratch that itch.

While I generally backed fewer crowdfunding campaigns last year (given the exchange rate and cost of shipping for Canada), this was one was one of the exceptions.  It offered a rule set and a decent amount of miniatures (in metal no less) with a good bang for the buck.  I still restrained myself considerably with the campaign and kept it at a Starter a just a couple of add-ons.  This worked out to 52 miniatures in the starter comprised of elves, orcs, and goblins as well as 3 goblin wolfriders, and 13 dwarves.  In addition to that, I qualified for 4 miniatures as free gifts and there were 2 promotional ones as well. 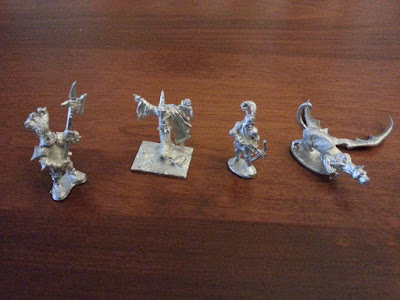 All in all, a total of 74 miniatures as well as a set of rules for Chaos Wars which is generic enough to use any number of fantasy miniatures despite of where they may be from.  All of that cost me $115 US before shipping (which ended up being $25).  At the time, I was tempted to get more but it was easy to go overboard and the exchange rate then was not doing me any favors.  Of course, I also had a wedding, GenCon, and a new campaign from Reaper to consider as well.  The other reason was simply because I had not dealt with Iron Wind Metals before either and given various Kickstarter issues, I didn't want to risk too much either.

So, what do I think now with the miniatures in my hand?  They are very nicely sculpted but smaller than I expected.  The campaign wasn't very specific on scale but clearly stated a range of 25mm to 28mm with a regular human being 25mm but champions, lords, and not-so-human being taller.  Let's just say that, it's one thing to read it and another to see it in your hand compared to other miniatures.  It means that some of these will never see play for my regular table-top FRPG sessions and, honestly, that's all right.  Painting these will still be a delight and these will really be for some fantasy wargaming and I am eager to do both.

Another point to mention is that they delivered ON TIME!  This cannot be stressed enough as how nice this is.  They gave a delivery date of December of 2015 and packages started going out during this time, I got mine on the 4th of January and given the holidays, I think that's great!  With another planned campaign starting sometime in February 2016 and given how awesome that skeleton looks, I may have to give Iron Winds Metals more of my hard earned cash. 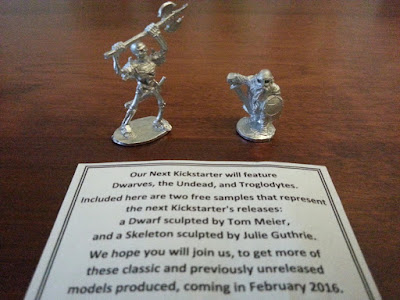 As for the rules... the booklets are nothing fancy but perfectly serviceable though part of me know wishes for a nicer hardbound option down the line.  Who knows though -- maybe with continued interest that may eventually happen.  Or at least, one can hope  I haven't read through all the rules (cover to cover) but from what I have read, I am eager to play and like what I see.  I heard the game plays fast and brutal as well so I think that's a good sign.  At some point, I'll give a more detailed writeup on what I thought of the rules after I have had a chance to play a couple of matches. 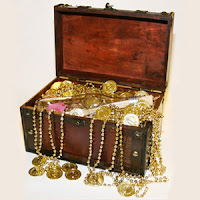 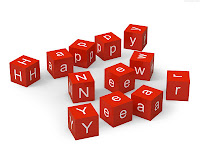 Much like Winter here in Montreal, the last few months and the first few days into the new year proved to be a bit slow.  Despite being in Canada, I did not see any snow until a few days after X-Mas.  And, when it finally came, it just kept on snowing and we ended up with over 20 inches in just a couple of days.  Today was a return to work and a regular (shudder) work week, and Old Man Winter decided to cool things further and temperatures felt like -22 Fahrenheit this morning (or, -30 Celsius with Windchill) when I left for work.

It was an uneventful work day.

The one thing I wanted to do was get back to Under Siege which hasn't seen an update in many weeks now.

The holidays is typically a time where I relax and look back at projects I haven't finished yet and those I want to do.  In many ways, this blog is a good outlet for me with regards to the hobby and a veritable lifeline for Arcana Creations which is where some of my creativity ends up being channeled to.  That part tends to be challenging.

However, a wedding and subsequent honeymoon will do much to derail best laid plans despite being fantastic!

Now, with a New Year comes new opportunities to forge ahead!  I'm also cutting myself a bit of slack given everything that happened in 2015.

I'm not one to make many resolutions but here goes: