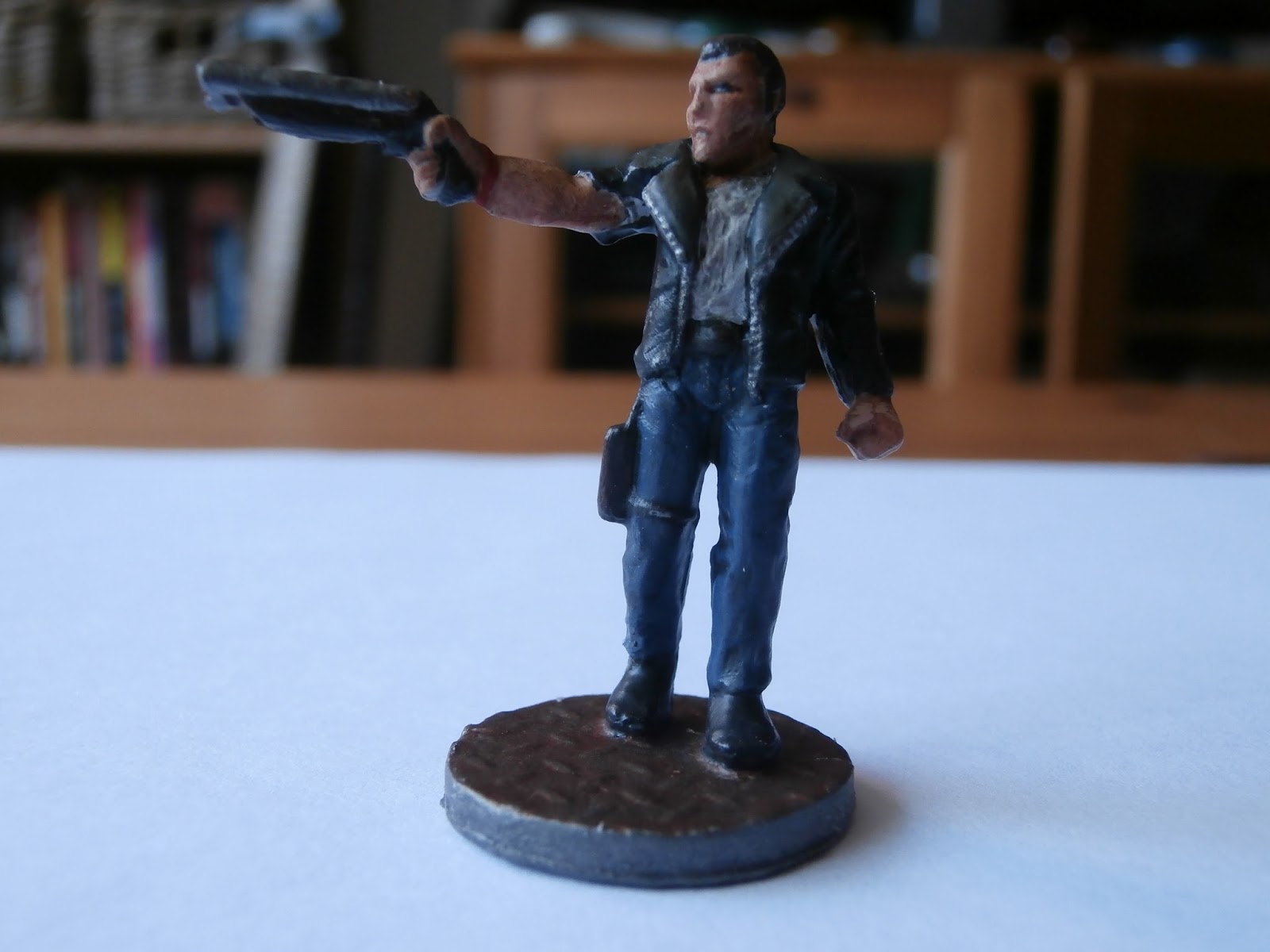 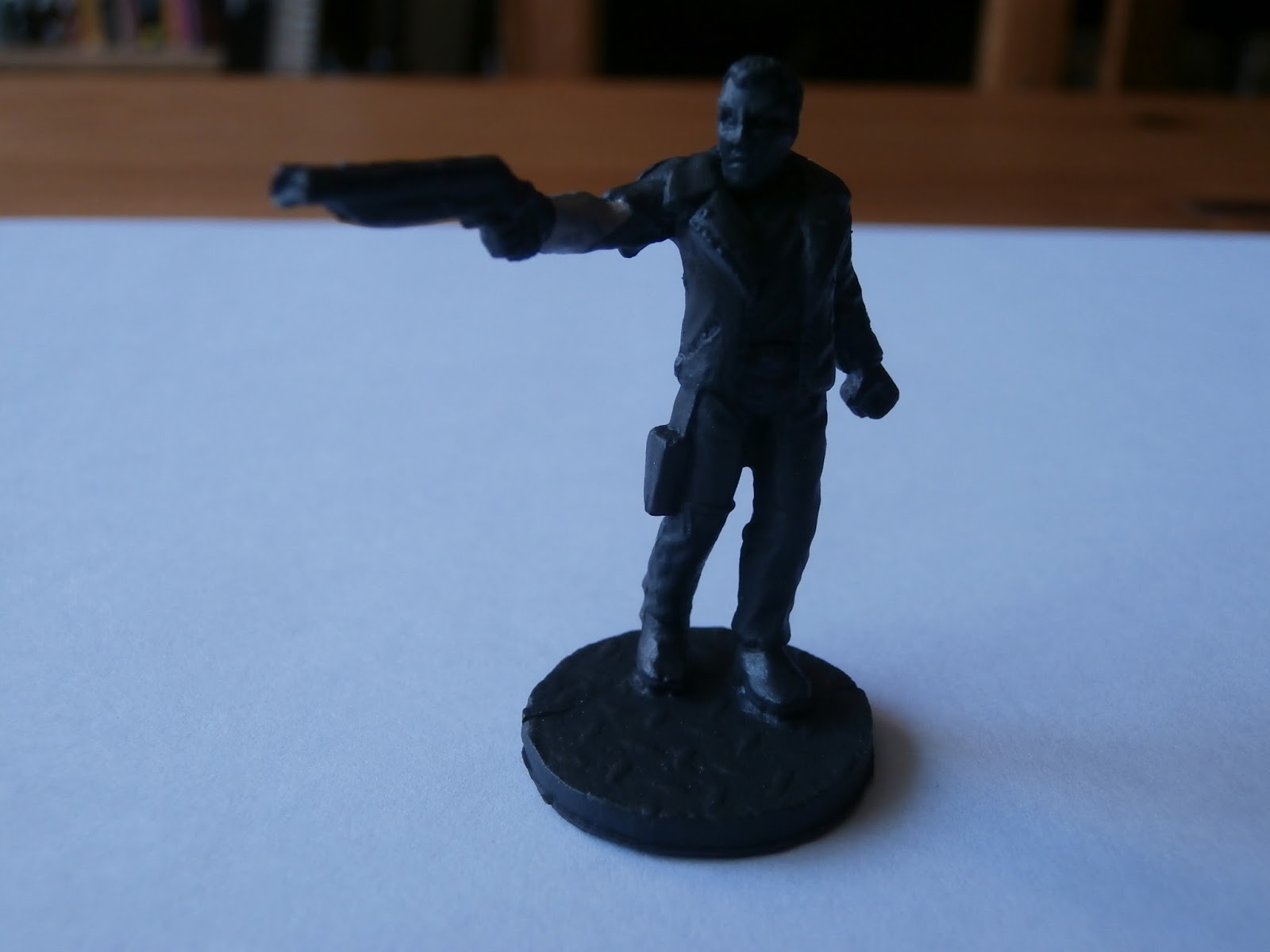 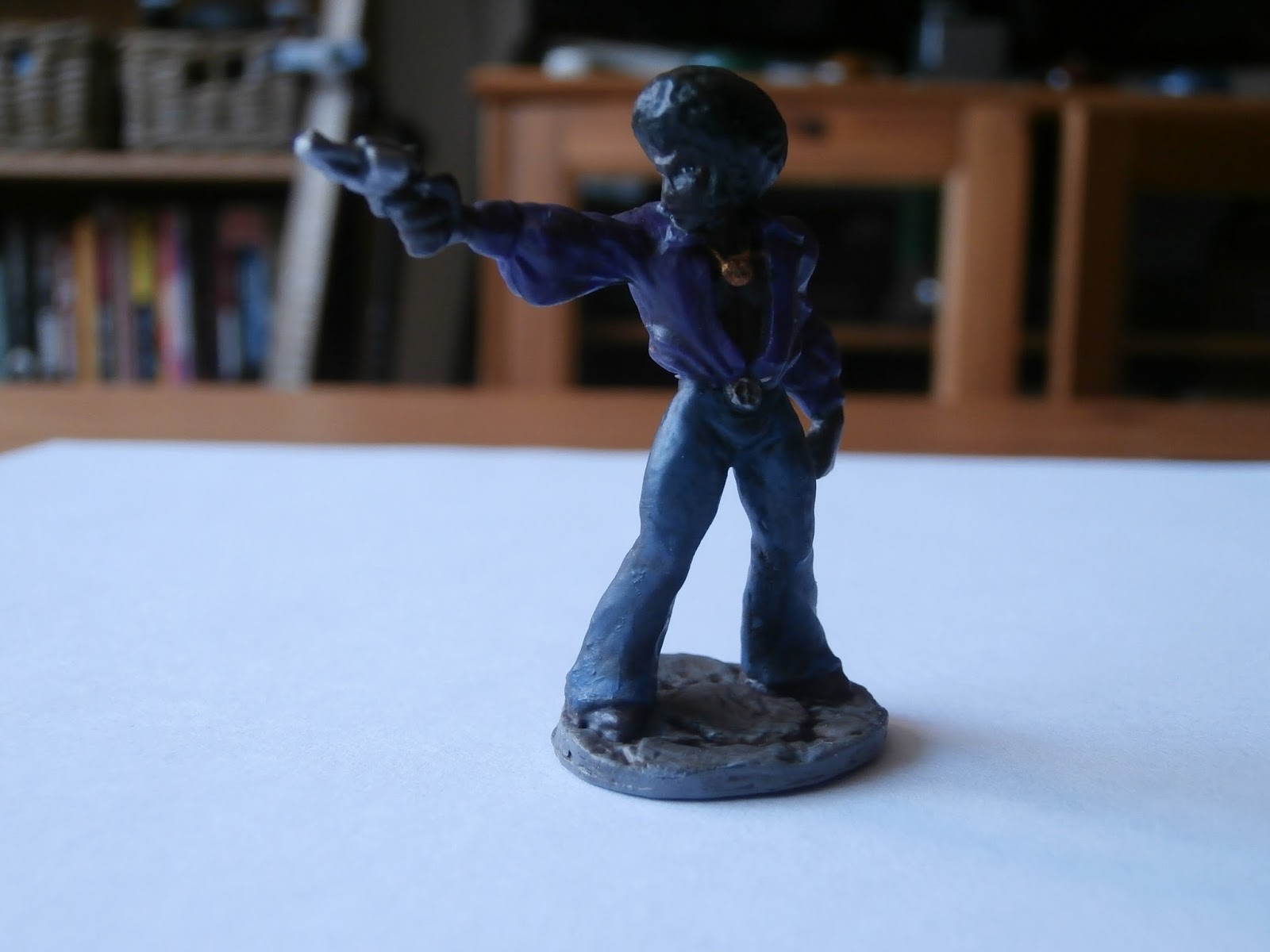 With the zombie game I was playing in today, I quickly painted up two miniatures to a basic tabletop standard.  Nothing too fancy but definitely nice enough to enjoy playing with for a game and still be proud of it.

The model is from Reaper's Bones line and, once cleaned, the first step was thinly applied layer of gesso.  The gesso I favor is by Liquitex since it seems to be more liquid as far as consistency goes compared to a couple of others I have tried out. 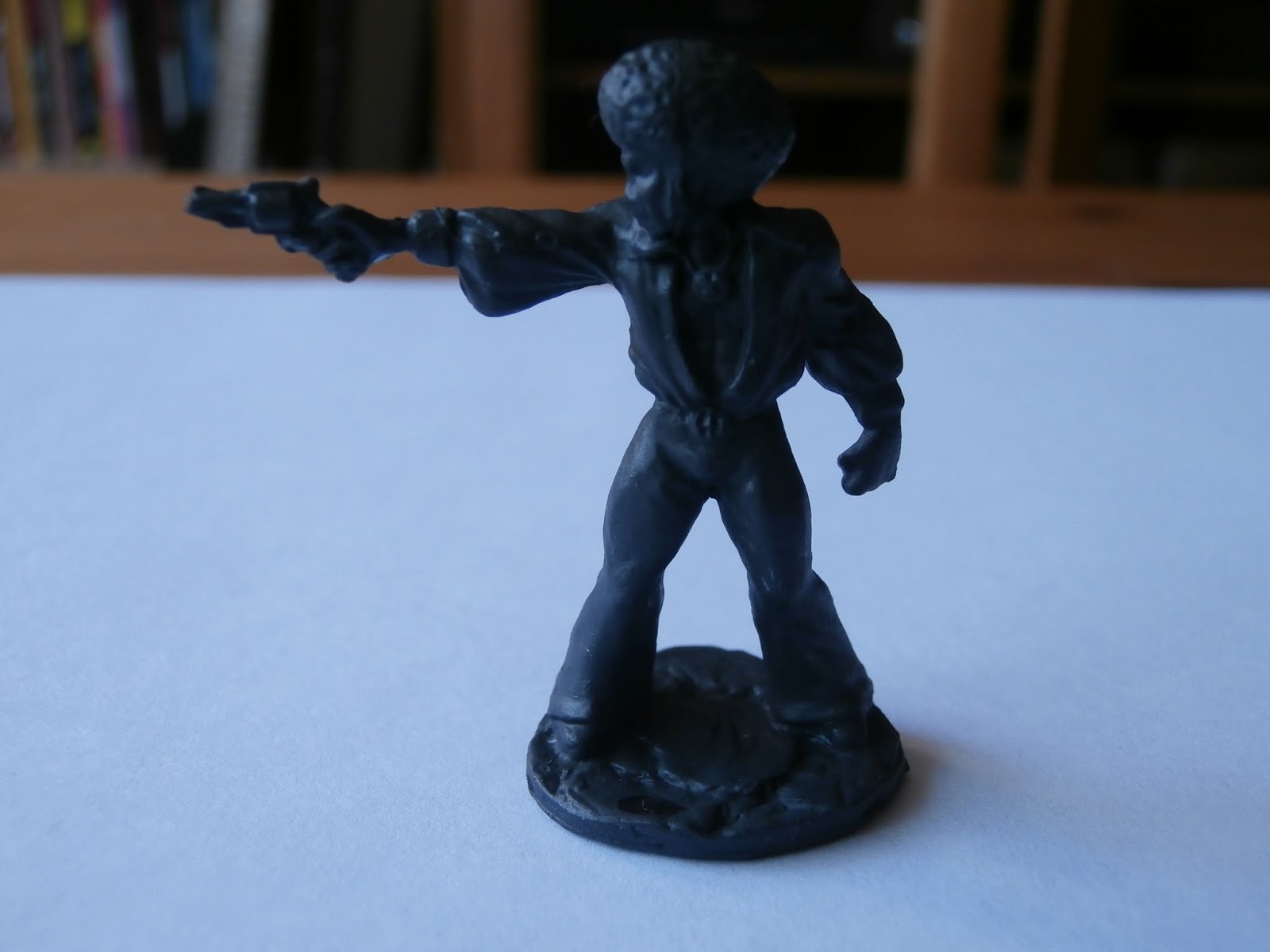 Now, I didn't have too much time to agonize over the details such as highlights nor did I want to.  It's not a mini that I will be using often and it isn't one that I am showcasing for any particular event.  My genre is usually Fantasy followed by Sci-Fi.  With a selection of a few colors, 90% of the miniature was finished once applied.

From the citadel line of paints I used:

At this point, we are nearly complete.  I used 'Agrax Earthshade' as a wash over everything.  The only details left over were the pistol and belt-buckle as well as the eyes.  I opted to use 'Runefang Steel' for both pistol and buckle.  I lightly washed both using 'Nuln Oil' sparingly.

The eyes were, of course, the most difficult thing to do on this model and most models which are on a 25mm - 30mm scale.  A touch of white is used with a small 'pin prick' of black towards the center.  I didn't use a pin ... the ones I had were too big anyway.  What I use and recommend is taking a toothpick and using a hobby knife to shave of a finer point on it.  Very easy to do but the application of paint onto the mini will take steady hands and likely a magnifying glass and plenty of light.  Don't be surprised if you need multiple tries to get it right but once you do, you will be happy with the results and others will be astounded by the work. 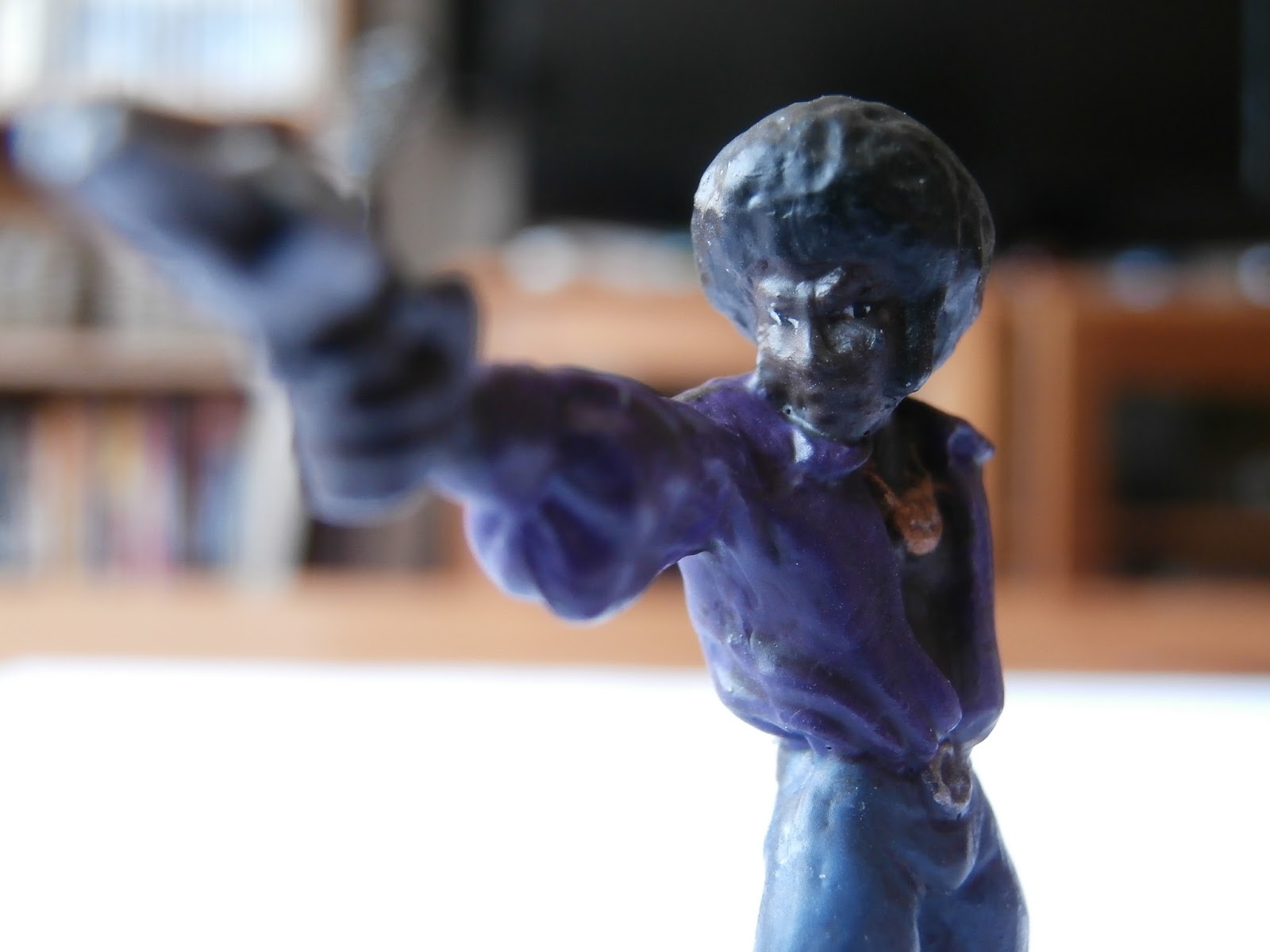 Once this is complete, I sealed with a matte varnish. 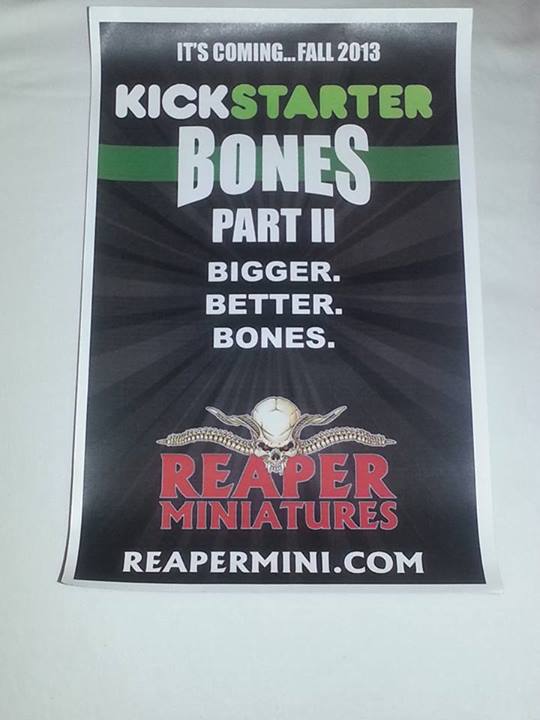 Apparently Reaper had this poster at Gencon.  To think that I've only started painting the ones from my large, first batch (on my third with 500+ to go).  At least I have the time to prepare for it.  ;)

Ok... It's been a while since I last put up a painting guide. Between writing, gaming, work, I get a bit of painting done here and there but, this one has been my favorite thus far. This model also represents the second model I have painted from the Bones line from Reaper Miniatures.

Because of the difficult nature on working on this plastic (documented HERE), I have opted to prepare the module after a good cleaning by using a coat of gesso. I do enjoy working with gesso as it avoids the complications of using an spray can to prime the miniature. Cautionary note regarding gesso – it is thick but thinning it out with a larger water to gesso ratio is NOT recommended. I applied thinly and sparingly. 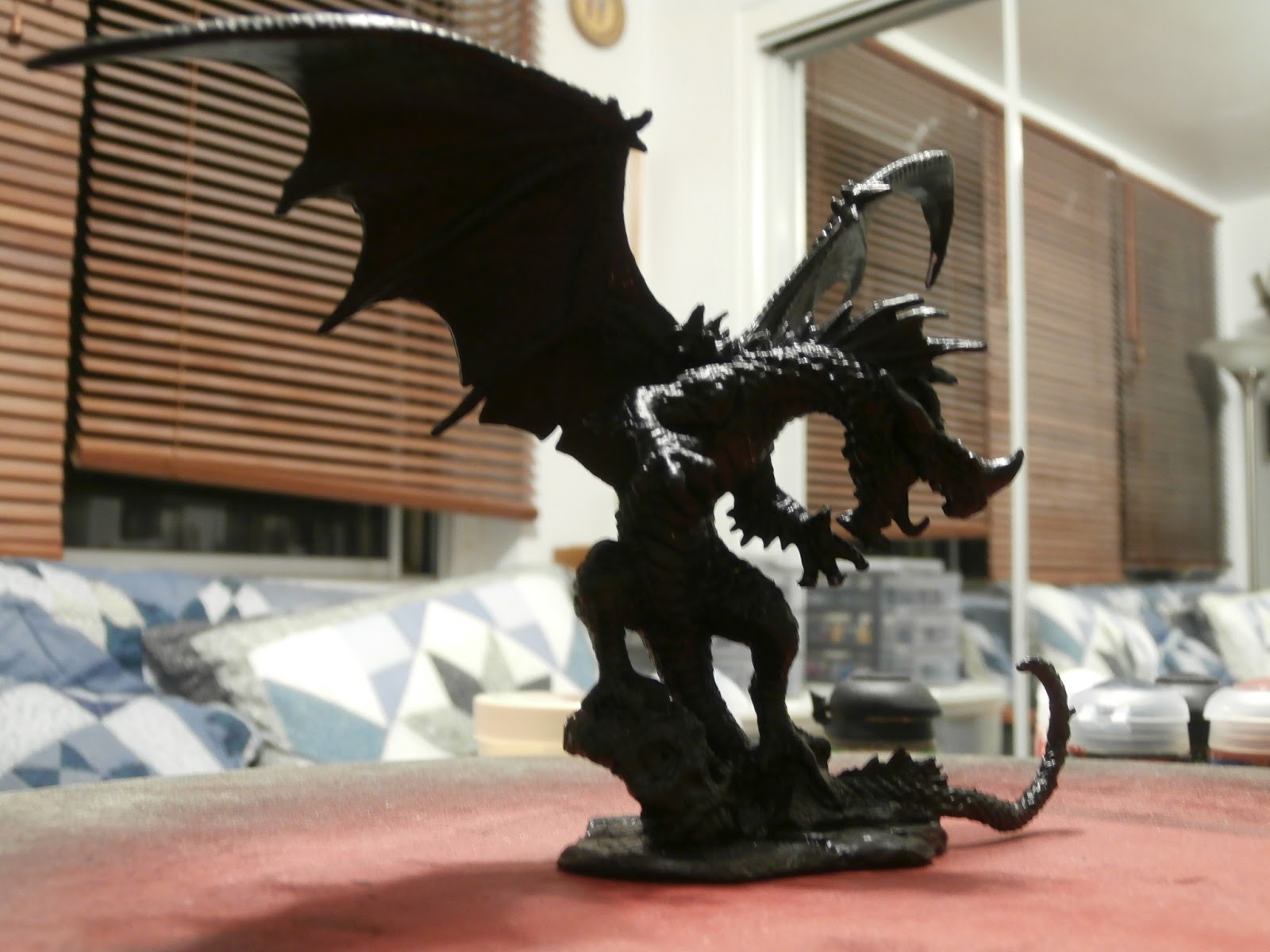 Now the model by Reaper was based on the look of dragon as seen on the cover of the Core Rulebook for the Pathfinder RPG. I opted for a slightly different scheme for the look of my red dragon. Once the gesso dried and 'cured' (I waited a full 24 hours), I chose to spray my model in 'Mephiston Red'. Mephiston Red is a paint in the line of Base painted by Citadel and, it is worth noting, that all the paints used were from the Citadel line. I used 'Ceramite White' for the teeth, 'Screamer Pink' for the tongue, and some 'Abaddon Black' for the bottom of the base and a bit for the interior of the mouth.

In many ways, this particular model was simpler than others I had done previously. Five layer paints were used for this model: 'Baneblade Brown', 'Eshin Grey', 'Dawnstone', 'Screaming Skull', 'Karak Stone', and 'Auric Armor Gold'.

Baneblade Brown was the most important paint after the red as this was used for the wings and underbelly of the beast. It's a light brown and critical for my next phase of the paint scheme. There were also a couple places along the dragons back that got a similar treatment. Dawnstone was for the ground in the base and Karak Stone for the rubble and broken statuary. Both Eshin Grey and Screaming Skull were used horns by doing a light wet blending effect. Screaming Skull was also used for the claws.

The so-important-next-phase involved using 'Carroburg Crimson' – a wash (shade) over the majority of the model... scales and wings alike. A generous but controlled application was done on the wings and underbelly which gives a reddish-purplish color when applied over the Baneblade Brown. This served to have these areas distinctly different in appearance while still remaining complementary to the shade of red I chose for the rest of the dragon. Also, because of how the shade allows for certain details to stand out, it made for a great effect to allow the wings to look a bit more organic and leathery compared to hardened scales. I used some 'Nuln Oil' for the claws and base.

At this point, the dragon was largely complete but the base still needed some work. I decided to try a bit more dry brushing using a couple of Citadel's Dry compounds. While I got the effect I wanted when applying 'Longbeard Grey' to the ground, I had trouble applying 'Golden Griffon on the statues head and rubble. Given the difficulties, I ended coating the majority of the surface. Once applied, I decided to use a light touch of 'Agrax Earthshade' as a wash on this same surface. It worked out nicely.

There were only two additional touches... Auric Armor Gold for the eyes and 'Bloodletter' which was a reddish glaze I applied on the red scales.

Once complete, I brushed semi-gloss varnish to seal the teeth, claws, and horns and used a matte vanrish for the rest.