I don't buy from the Bundle of Holding as much as I would like to since I tend to be a lot more discerning about what RPG products I do buy.  More often than not, stuff I would be interested in, I already have but it did help introduce me to some games I wouldn't have normally.  But this time around, Troll Lord Games have partnered with them and has up for grabs a whole bunch of Castles & Crusades stuff for a really great price!

With the Bundle of Holding, there are two tiers.  The entry tier at a fixed price and a higher tier of goods which you get when you beat the present threshold ($21.28 at present).

The starting tier gets you three books (retailing at $47):


Beating the threshold will get you another five books (retailing at $73):


All in all, a decent haul of products for less than $22 and a great way to dive into Castles & Crusades.  In fact, the only 'key' book missing from this lineup would be the Monsters & Treasure book (also in full color) but, given the roots of this game, hardly needed if you have classic D&D books or even d20 monster books.  The Classic Monsters also has an index of monsters in the back that includes the basic stats for the monsters found in the original M&T book as well as a whole host of interesting critters as well!

Unlike the Humble Bundle, you can't set how much goes to charity.  The amount for charity is a fixed amount (and calculated after the gateway fees are paid) which means that 10% will be going to Heifer International.

While not garnering the same sort of numbers that Paizo is doing with the Humble Bundle right now, the amounts for the Bundle of Holding are steadily rising.  It would be REALLY nice to see it climb much higher though.  If I didn't have every single title listed, I wouldn't hesitate to participate.  Instead I'm doing what I can by passing this along.

You can find this particular Bundle of Holding deal over HERE.

However, if you are like me and already own all or most of this stuff, maybe you should check out Paizo's bundle benefiting charity which I talk about over HERE.

For many of my gaming-savvy reader, the Humble Bundle and Bundle of Holding are two services you undoubtedly already know about.  I came across Humble Bundle a few years back and I have bolstered my Steam collection of video games by an almost embarrassing amount during this time.  To my delight, and financial dismay, they started doing similar things with books of all sort as well as comics.

The way it typically works is simple, there are typically a few tiers with the first one often being a 'pay-what-you-want' though sometimes this will just be a set, but ridiculously low priced tier.  Then there are a couple other tiers available -- usually gotten by a 'beat the average' amount or higher fixed amount and, the highest tier which is fixed.  All of this is digital which is part of the reason they can do this for low prices to begin with.  With the growth and success of the Humble Bundle, they are now able to run multiple campaign bundles simultaneously and the really nice things about these bundles is that benefits go to charity.  With whatever amount you end up pledging, a percentage goes to the publisher who is offering these goodies, a percentage goes to the Humble Bundle group, and a percentage goes to a particular charity (which will vary depending on the bundle).  The splits for the money are predetermined by default buy you can customize who gets how much if you like (I often tend to bump up the charity amount compared to the other two but everybody gets something).

However, what took me by surprise is Paizo partnering up with Humble Bundle and offering a MASSIVE Pathfinder related bundle.  Don't get me wrong, it's not that I was surprised to see Paizo participating -- I have just never seen any table-top RPG offered up in that way on Humble Bundle before.  Frankly, this is fantastic and the offerings are impressive.

For a single $1 (or more -- this is for charity), you get the Core Book, GameMastery Guide, the Digital Beginner Box, Character Folio, Advanced Class Guide, GM Screen, and the first part of an adventure path.

If you pay $15 or more, you add on to that a copy of Ultimate Magic, Ultimate Campaign, Ultimate Combat, Bestiary 2, Inner See Post Map Folio, Year of the Sky Key Scenario Mega Pack (23 adventures), and another part of that aforementioned adventure path.

Paying more than the average (currently $17.19) gets you the Inner Sea World Guide, Strategy Guide, Bestiary, Ultimate Equipment, the Advanced Players Guide, and another couple of scenarios.

As it stands, for less than $18 -- you get a whole lot of Pathfinder.  And, for those of you who would like something a bit more tangible, a pledge of $25 or more will also get you a physical copy of the Pathfinder Beginner Box.  Well, at least $25 plus shipping.

That said, unlike most other Humble Bundle transactions, this one did not run smoothly right out the gate.  Paizo greatly underestimated the demand when they decided to do this and in the past few days, over 40,000 bundles have been bought.  Paizo is hosting the files themselves and the demand on their servers with the watermarking process creating an interesting bottleneck has led to a lot of frustration for regular users as well as all these new users.  It has taken me the better part of a couple of days to get all my files and I had waited a couple days before that even trying.  Paizo apparently took steps after the problems arose to try and cope with the increased demand and I can say that this morning shows a vast improvement over the past couple of days.  The good news is, once they are bought, they are yours and there is no time limit to get them or if you need to re-download them.

However, had Paizo allowed Humble Bundle handle the hosting of these files, it might have allowed them to prevent these issues from even happening.  But that would mean skipping any watermarking (or personalizing) of the files in the first place.  Yes, it means forgoing any updates to the files (correcting typos or whatever), but that's hardly a deal breaker either.  It would also mean that people wouldn't have to create a Paizo account if they didn't already have one in order to get their PDFs.

Let's focus on the good though:

With over 40,000 purchases... over $690,000 has been raised so far.  Paizo is getting a nice boost as well as charity and there are still 10 days for these numbers to grow.  With tremendous value, this bundle is a great way to get into Pathfinder or grab them for reference.  I'm not a Pathfinder guy but I admire what Paizo has done and I had no qualms about doing my part.

You can find the bundle HERE.

But maybe you already are a huge Pathfinder fan and have most (if not all) of these already.  Up next, I will tell you about another tabletop RPG bundle benefiting charity. 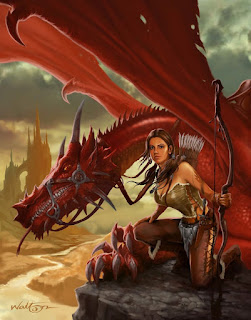