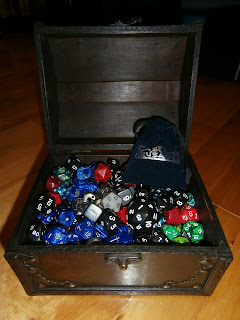 For many gamers, March 4th will mean different things for them.  Since 2002, March the 4th is recognized as international GM's day, and since 2008, it also marked the a anniversary of Gary Gygax's passing.  GaryCon has become an event since then to remember him and honor his memory by rolling some dice with some friends and gaming in his memory and honor. This year, I chose to read 'Empire of Imagination' by Michael Witwer to commemorate this anniversary.

Much of what I read I have known for years but seldom have I read the account told in such an engaging way.  The book chronicles the birth of Dungeons & Dragons and the events that shaped the life of Gary Gygax.  It is by no means a 'heavy' read but certainly enjoyable.

The book itself seems to focus more on the earlier aspects of his life as opposed to his later years but it isn't an in-depth study nor do I feel it was ever meant to be.  The author presents the information more in the framework of a narrative then a collection of hard facts but, there are plenty of notes to back up the majority of what the book presents.  Above all, it did make me think, get a bit nostalgic about my introduction to the game, and reflect on my own gaming right now.

Honestly, I don't think there are many better ways to celebrate this anniversary save from actually gaming!

Out of everything that I read, the one thing that surprised me was the extent of description of the older first edition backstock that TSR still had on hand when they began to publish 2nd Edition.  A comment in the book likened 2nd Edition to how 4th Edition was viewed by fans of the previous edition and that 2nd Edition sold only half as well as original Advanced Dungeons & Dragons did.  Apparently skids of 1st Edition rulebooks were sitting in the warehouse as 2nd Edition was being pushed.

When I first was introduced to the game, I came to it while my father was stationed in Germany.  I made friends and a couple of them described to me this game which sounded fantastic.  This was D&D but what we all then collectively called D&D was truly a blending of D&D (Mentzer BECMI sets), AD&D 1st Edition and AD&D 2nd Edition.  Accessibility to gaming material, and above all dice, was challenging at times.  Ultimately, as 2nd Edition material became more available, this is what we played and I ran.  At the time I got into the game, I couldn't buy any of the 1st Edition core rulebooks (being the Player's Handbook, DM's Guide, and any of the Monster Manuals) but the all the other hardbacks could readily be found along with many of the classic AD&D and D&D adventure modules.  I also remember getting my hands the free TSR product catalog and was floored by all the stuff that was available.

But the passage of time also grants the gift of perspective.  I understand and view things differently now than I once did.  Ultimately, Witwer's 'Empire of Imagination' served to remind me of a couple simple truths...

While I think that pen and paper RPGs are still going strong today, the golden years were back in the 80's when it games to these type of games with TSR and D&D on top.  And, if it weren't for Gygax, we might not have any of this.