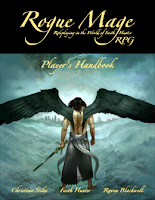 This week is featuring an early edition of the Weekend R&R in virtue to having been surprised with my hardcover copy of the Rogue Mage PHB earlier this afternoon.  Those of you who follow my blog may remember mentioning a Kickstarter back in February earlier this you about this game being developed in part by Christina Stiles along with the novelist, Faith Hunter.  If you want to look back on that post, you can view it HERE.  It seems so long ago now and, back then, this Kickstarter was only the second I backed (I have since backed so many more).  Now I was fortunate enough to get my PDF copy of the PHB along with the rest of the backers a few weeks back and, while it looked good, I hadn't really gotten a chance to go through it much.  With a physical copy in hand, I was better equipped to give it the attention it deserves.

Simply put, it's a nice book and a nice game.

Now, I admit that I haven't read the books that the game is derived from and, on top of that, the game is a d20-based game.  Some of you may wonder why I would back this project.  Aside from the respect I have from Christina, the premise of the setting seemed interesting.  The way I understood it, it's an End of Days campaign setting centered which takes place about a century in our future.  Angelic and Demonic forces continue to wage their wars and most of the Earth's population have been wiped out.  The survivors either fight alongside them or mind to their own affairs among the wastelands.  Sounds cool... but with d20... how will it play?

Well, I prefer a Rules Lite style of play and, the reason why I set 3rd Edition aside was that I found a lot of it tedious and a general pain.  It's also why I didn't get into Pathfinder either.  They are both fine systems but, I preferred a game like C&C.  But, when I was still invested in 3rd Edition D&D (actually 3.5), I did try and find solutions and alternatives to make my game run better.  This led me to other efforts such as True20 (derived from Blue Rose) which did a lot of interesting things with the d20 based system that is the basis of 3rd Edition.  True20 was a nice step forward which did away with certain established and accepted features that we recognize from D&D but I never felt it was enough and the True20 Player's Guide never did seem quite complete for me though I did enjoy it.

In some ways, the system in Rogue Mage feels like another step forward.  Granted, I'm sure a lot of that is because of the setting material which is married to the system and aspects of the system were created especially for the setting.  The book does a great job in summarizing how this game is different from other d20 based games (summarized on page 10 of the book), and a lot of these is why I wanted to back this product.  I will summarize some of the key points here:
Add to that a luck mechanic and an interesting magic system, and you have a good take on a d20-based framework.  Even if the setting isn't quite to your liking, I think there is enough in this book to mine from if you wanted to spin a d20 based game in a different fashion.  As for me, I'm not sure if I will ever run Rogue Mage but it's not because I wouldn't want too.  Sometimes is just a case of too many games and too little time and sometimes the problem is also trying to get a group of players together to play a different sort of game.  I certainly want to try though and I would recommend others to at least check it out.

As for the book itself, the hardcover edition of the book is nice and totals about 240 pages.  It's got black and white interiors and various nice pieces of art -- some by Peter Bradley, the principal artist for Troll Lord Games.  As a rulebook, it is clear and concise, but thankfully, there is also fiction scattered throughout the book and fans of Faith Hunter's work who want more from the world of Rogue Mage won't be disappointed.  The price for the hardback has a MSRP of $39.99 though I have no idea what the pricing is for the softcover versions of the rulebooks.  These are not commercially available (yet) but the PDF version of the book is a mere $9.99 which can be purchased from RPG Now! or direct from Misfit Studios HERE.

In the meantime, not only do I have more reading to do with the PHB, but I also have the Rogue Mage trilogy to read as well!