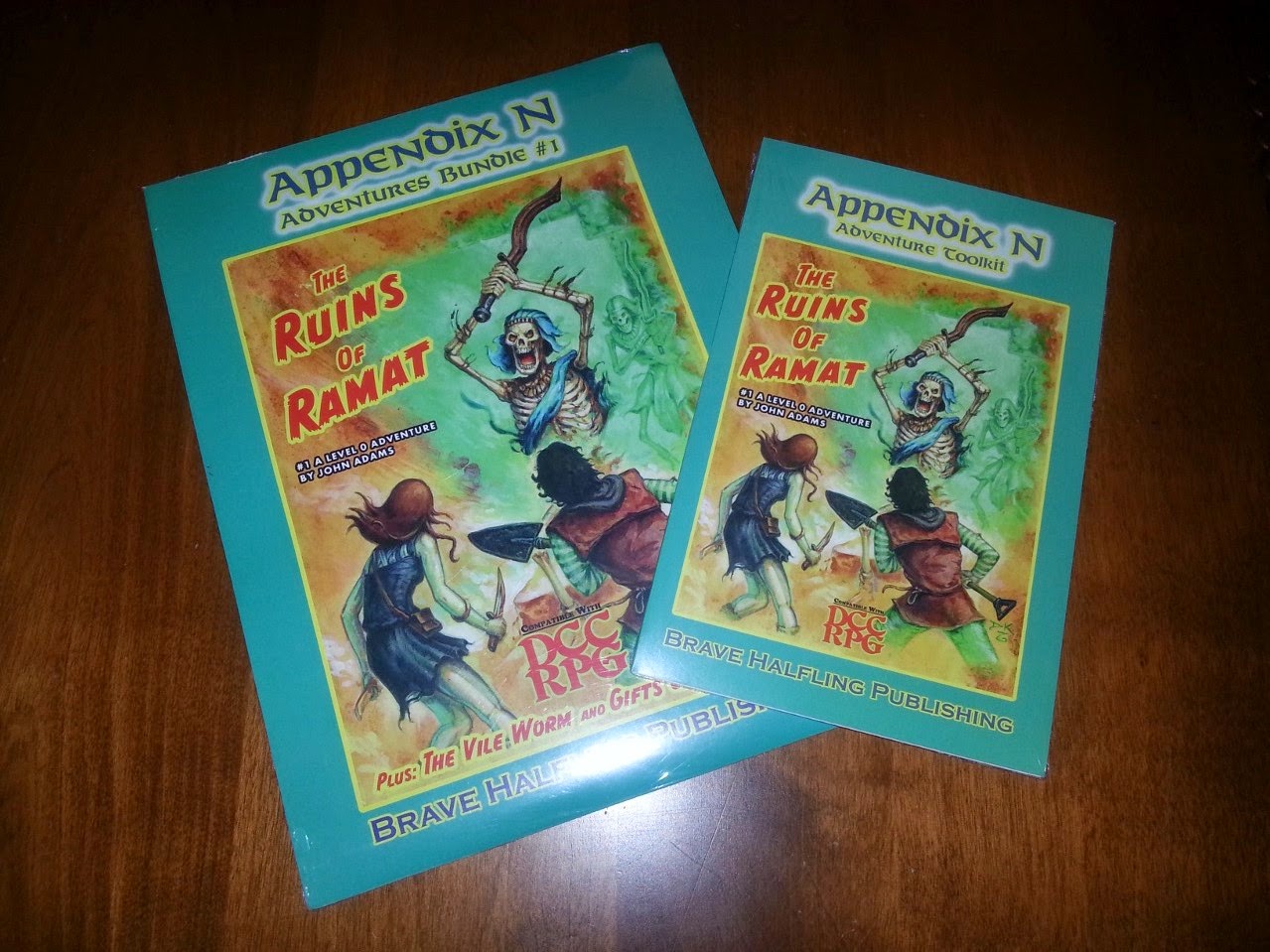 Well, this has been a long time coming.  I got some of the Appendix N Toolkit material at GenCon when I had the pleasure to meet up with my friend John.  Full disclosure here: I have worked with John Adams (Brave Halfling Publishing) and Arcana Creations came about a lot with his encouragement and support.  Over the years, I have supported John when I could and when called upon.  I am also a backer of the Appendix N Adventure Toolkit Kickstarter but have NOT received any preferential treatment compared to other backers.  Have backed many a project, I can sympathize with my fellow backers but unlock other Kickstarters, John has not completely fallen off the face of the earth.  On that note, I'm glad that Dwimmermount has gotten sorted out (I have received my copy) but I am very disappointed and the utter failure of both Myth and Magic kickstarters which I enthusiastically backed.

I know that some people have been getting their stuff in the preceding months before I got something and it was only the fact that I met up with John that he was kind enough to bring a couple of samples to me as well as some other goodies that have been previously published (in some cases) ages ago.  What I got certainly does not reflect the totality of what is due to me (as a backer) or other backers in the $20 and above category.  However, what I did get will were samples from the retail version of the Appendix N Adventures Toolkit #1 that made it in some stores about a year ago and the Kickstarter version which was shipped (still shipping?) to backers.  It struck me that, comparing the two version and allowing for a glance at the quality would be a neat thing to do.

The Appendix N Adventure Toolkit series was a brilliantly conceived idea and concept.  Short adventures, card stock handouts, and detachable map cover in a digest format.  I believe that adventure modules, especially today, should be convenient, inexpensive, and practically disposable.  Of course, not everyone shares my opinion but I figure that once you run a published adventure for your regular group, the odds that you do so again are likely to be slim.  The digest format is a hit for many though certainly not the norm.  This in part explains the visible size different between the two products as some distributors and stores dislike digest sized products and prefer a larger / fuller sized product which will often carry a larger sticker price.  Pricing is the second hurdle for these kind of products.  A store will typically make for itself only 40% of a cover price which means a $10 sale will likely yield a $4 for the store.  When Brave Halfling Publishing released number one of the retail edition, it had the appearance of a full-sized product that would be inline with many other similar gaming products down your local game store. 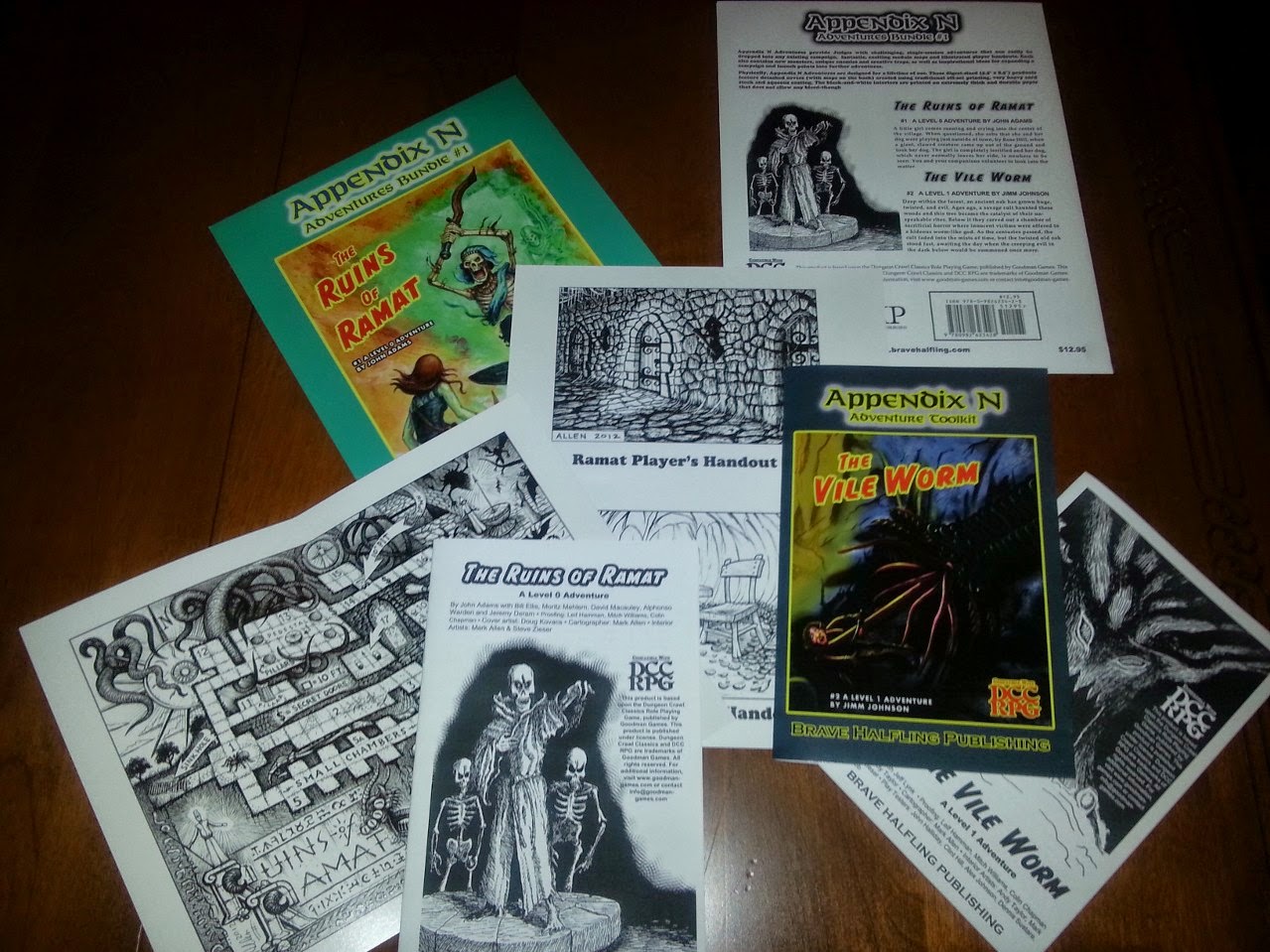 When you open up the retail version, you have a two sets of interiors which are stapled together which fold up to be digest sized modules.  You also have two card stock covers with maps on the inside (in the photo above, the one for the Ruins of Ramat is open to reveal the map) as well as card stock hand outs (illustrations).  At first glance, the 'cover page' and 'back page' are simply part of the packaging though the cover is printed on the type of paper stock that conceivably turn it into a small poster and the interior side of the back has 'add-on' material to give the buyer a better bang for his buck.  At a MSRP of $12.95, you basically are paying $6.50 per adventure for a nice quality product and will net a retail store just enough to consider carrying it given the success of Goodman Game's DCC RPG. 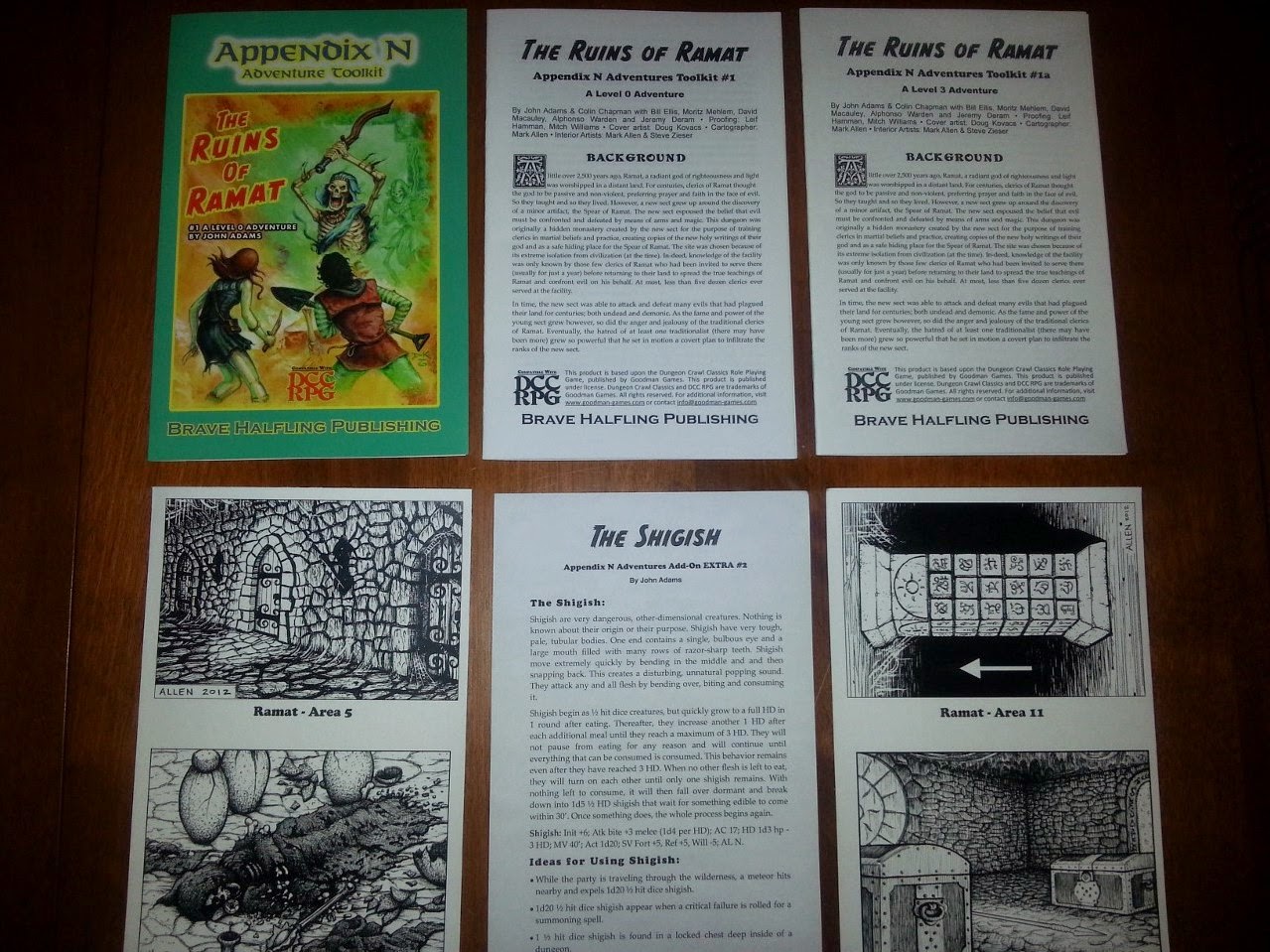 In comparison, the first Kickstarter release of the Appendix N Adventure Toolkit line is limited to just the Ruins of Ramat adventure.  The Vile Worm would have been the second release from the Kickstarter and I have not seen this yet.  However it is safe to say that the contents are almost identical to the one included in the retail bundle.  By comparing the the two versions of the Ramat adventure, you quickly find a couple of differences.  First and foremost, there are two different versions of the Ruins of Ramat in the Kickstarter version compared to the single version included in retail.  One is a level zero adventure and the other is a level three adventure.  The hand outs in the Kickstarter version seem to have a couple more illustrations for Ramat than the retail version (it has two for Ramat and two for the Vile Worm) does but there illustrations are a bit smaller to fit two per digest sized page as opposed to a full sized (letter sized) page.  The Kickstarter version also has an add-on on the back cover page which is different than the one included in retail.  Oddly though, I expected to see two add-ons and not just one for this first release.  I don't know if it was an oversight but given that it was also released as a PDF and made available to backers, it's not something I would lose sleep over.  Like the retail version, the quality is top-notch from Brave Halfling Publishing, a great little hobby publisher.

What about the adventures themselves?  Ironically, I very familiar with both adventures.  The Vile Worm was used and converted to Swords & Wizardry by Arcana Creations and is available HERE.  The Ruins of Ramat has a more colorful history and has had changes done over the years by Brave Halfling Publishing depending on the system it was converted for.  Arcana Creations has done a Castles & Crusades version (available HERE) as well as a Swords & Wizardy version of the adventure (over HERE).  This version of Ramat and my versions of Ramat do differ fundamentally -- mine is spread out over two levels as opposed to a single version.

The adventures are both, short and meant for single-session play.  These are easily inserted into an existing campaign or a great launch point for a new one.  They are also solid adventures to do some game demos, if you are into that sort of thing, at your local game store.  These are very 'standard meat and potatoes' style of fantasy dungeoneering.

As Brave Halfling Publishing continues to struggle in meeting its obligations to its backers, it is one Kickstarter campaign that is still trying to make good on its commitments and continues to be open in terms of communications.  As a friend, I have an idea of some of the challenges that he has been met with over the past couple of years and I do wish him and BHP all the best as it continues to forge ahead.  I, like many of my fellow backers, would love to see he rest of the line in print glory and I think the line has tremendous potential despite all the setbacks.  Alas, this is one of the consequences of being one of the small guys in our hobby.  Did he underestimate certain things?  Absolutely.  Did he bite off more than he could chew?  Undoubtedly.  Does he regret the problems and is he trying to correct this?  Without a doubt.