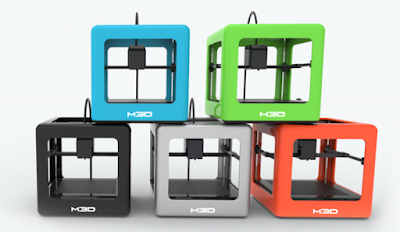 I have had my mind set on getting a 3D Printer for several months now.  I have been constantly checking out various offerings available, kickstarters, and reading up on this relatively new and rapidly evolving technology.  As a hobbyist interested in miniatures, there was no end of what I could potentially do with one of these tools in my arsenal.  Of course, price was a bit of a barrier but things have been changing there too.

Knowing myself all to well, I figured that I would want a bigger, faster, better printer to suit my tastes and needs but since I was all too new at this, I figured that a much more economical and smaller option would serve me well as a 'starter printer'.  My choice and finances narrowed down the choice to two models and I opted to go with the M3D printer.

The best piece of advice I have seen (a video put out by the Printrbot people) was that, 3D printing is hard.  There is so much truth to this statement when you consider the multitude of variables that go into a successful print.  The technology is still a new thing after all and many refinements will be made as time goes on.  However, there comes a time when it seems like circumstances are stacked against you.  Given my experiences with the M3D, I have to say that I have either been extremely unlucky or, there are issues with this model that need to be rectified.  What follows are my experiences, impressions, and ultimately my review on the M3D, so get yourselves a nice beverage and settle in.

I ordered the M3D printer straight from their site and elected to go with the 'Standard Edition' for a mere $349 USD.  They also have a 'Retail Edition' for a $100 more but, make now mistake.  It's the exact same printer.  Any refinements made to the printer are available on all printers.  I believe one of the main changes was the print bed itself.  Honestly, he biggest different between the two packages is that the retail one comes with a roll of PLA filament and has a one year warranty compared to 90 days for the standard one. Shipping was quick and I had my unit within a few days ordering it from the US.

The printer itself is tiny and cube-shaped and will occupy a very small footprint on your desk near you computer.  There is a USB cable to connect the printer to the computer and an AC power adapter to supply the necessary power.  One of the interesting features of the design is an internal compartment located under the print bed for a roll of filament.  It is smaller than a typical roll so, unless you plan on buying their own filament, you'll likely have to feed it externally.  I bought one of their rolls to get me started.  The package itself was fairly bare-bones.  There was a couple pieces of paper included with the unit -- one instruction to remove clips before attempting to print anything and the other directing to an online address to get the software to start using the printer.

Here's the first problem that people will notice.  All the software available are BETA releases.  While it is nice that the software is being developed in-house and the software is being made to be user-friendly, there is no real clear indication on which version you should use as several are listed.  Ideally, stability is what you want but there is little to indicate what that might be.  Fortunately, installation is simple and each version will download the appropriate firmware update for your printer.  Everything went find and, tracking down the online manual, I followed the steps and began printing.

The whole process was painless and I was up and printing within 15-20 minutes.  My first print and the few that followed seemed to all work well enough.  After my fifth print (and not a single failure), I noticed the tendency of my raft to be almost impossible to remove my print.  It often broke up leaving bits on the bottom of my print and, some research led me to realize that my printer might need to be re-calibrated to alleviate this issue.

I should be clear here that, the manual got me up and running and didn't even mention calibrating the printer before my first print.  Kind of odd when you think about it but, if you don't know better, and they pretty much advertise that you can start printing right of of the box, you might not give it any thought at all.

So, looking up online because the manual was of no use, I was able to find a few tips on how to calibrate.  To make a long story short, I started to print a test border to see if everything was well, and instead of doing a border around the bed, it essentially 'carved' an inch square in one of the corners of my test bed.  That disaster led to another when I tried to calibrate the bed position.  The print head shook violently as it moved to the center, except that it kept going and moved to the front of the printer.  The nozzle came down, beyond the print bed, and plunged into the frame of the printer.

A week and a half went by with no word so I chose to escalate to a manager.  Thankfully that got the ball rolling and a few apologies on top of that.  Instructions and shipping label in hand, my defective printer went back to the manufacturer and, they in turn, sent my my replacement.

All in all, the first printer lasted me less than 48 hours before hardware failure.

The second printer came to me not too long after that but the days since the original order happened were quickly going by.  Immediately, I was able to notice problems with the fan.  It was extremely and uncharacteristically loud but, at least it worked.  Gritting my teeth and knowing I would have to deal it with it, I set up my external spool holder (apparently there are problems with using the internal feeder) and began a series of test-prints after making sure I calibrated the bed location.  I was having a couple of problems compared to the prints I had gotten from the first printer and I noticed the weirdest of things on one of my prints (a trusty test-cube I had been using on and off for testing).  It was about a quarter of an inch shorter than the other test cubes I had printed.  The print was completed but it was like the height got compressed.  I was also experiencing a fair bit of shifting along the X and Y axis.  When I noticed these issues, I decided to calibrate the bed location again and, for whatever reason, it decided to plunge the nozzle into the print bed.  This was my second printer and the second time I have this issue and, also within a week of receiving it.

All I could think of at that point was that this printer was garbage.  Having already escalating an issue to a manager, I decide to start with that.  It didn't take long for a reply.  In short, I wanted my money back and wanted to know where I could ship this thing.  As one can expect, they weren't exactly eager with that and were quick to point out that I was past my 30 day money back guarantee.  By this point, between the original date I placed the original order, I've had a printer go back and forth from Maryland and Montreal twice with a 10 days delay in processing an RMA I had to escalate to get things going.  I was equally quick to point out that fact and, taking those 10 days into account, I fell WITHIN those 30 days.

The company was fairly reasonable at that point and presented me with two options: I could get a refund less a 20% restocking fee.  Or... I could get a third printer but, this printer would be 'extensively tested' before shipping it out to me.  I gave it some thought, and accepted the replacement but negotiated an extension of my warranty.  This ended up being an additional month (30 days) which basically covered the period that I lost with these two problem printers.

With all the testing, which mostly consisted of a few larger prints and a couple of smaller technical prints went well enough but it took the better part of a couple of weeks before I got the printer in my hands.  The manager who tested out the printer was very forthcoming with answers to the multitude of questions I had.  It took a bit longer to get this replacement but it would be all worth it in the end if the printer ended up working the way it should, right?