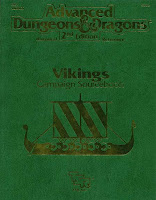 Yes... I know it's Monday. Yes... I realize it's called 'Weekend R&R' but I'm on Vacation.  I think it's just an extension of what will be a 'looooong weekend'.  Besides, I watched the Avengers yesterday and I must confess that going to see the movie yesterday trumped sitting at home and writing up a blog entry.  So here we are.  :)

Seriously folks, I'm in a great mood today (a rarity for a Monday) and I've got quite a bit of gaming work ahead of me this week but before I dive into it I thought I'd talk about one of my favorite things that came out of the 2nd Edition era of AD&D with TSR.  I'm talking about those fantastic looking, green looking, Historical Reference supplements.  Unfortunately, while I could cherry pick a volume to talk about, I thought they were all good.  If I was forced to pick, I would have about four favorites.  Since there was only seven books in the series, I decided not to even try and go that route.  Maybe at some other point I might call upon one book and talk about it in relation to another.  That said, I will likely talk more about the 'Vikings Campaign Sourcebook' for no other reason that it was the first in the series and the first one I acquired when it was released back in 1991.

This was third in a line of supplements designed to put out even more product for another potential reference stream.  A line targeted not only for the DM but the players as well.  Up to this point they had the 'blue' reference books which were targeted with the DM in mind and the 'brown' reference books which were targeted for the players.  At least that's the way I saw it.  Some might think that these historical reference books were more for the DM than a player for the purposes of using as a resource for their own games.  I had bought this first book to draw material from it for the purposes of my own campaign I was working on at the time.

In the end, it was more than just a campaign setting -- it provided alternate rules and options to supplement and even replace guidelines the core AD&D game already provided.  Different class restrictions... different races... and, refreshingly enough, better contextual weapons and armors as well as equipment for the time period and region the book dealt with.  Between this sourcebook, the DMG and PHB, as well as the Monstrous Compendium, you had everything you needed to play and run a 'historical fantasy' game.

As for the setting material itself, a simple and concise timeline and historical overview is given.  You have different maps (including a color foldout map) and sample floor plans.  You have chapters dealing with the culture and religions and how the society is structured as well as politics.  There is also a gazetteer with brief description of various locales.  Of course, depending which volume one looks at will depend on what actually is in that particular book but they each tend to follow the same kind of format.

Of course, the one thing that each book has is some sort of of suggested reading list and bibliography.  This is perfect if one looks to take a step further and really delve into some history.

That said, these books are getting harder to come by.  The people that seek these out tend to hold on to them and since WOTC, who owns the rights to all of this stuff, pulled the PDFs a couple of years back -- the only legal option is the second hand market for printed copies.  Looking at Noble Knight Games, the few copies they have average about $20 a used copy and ebay seems to be all over the map as far as pricing goes.  Here's the complete series:

Myself, I had bought a couple when the first came out but I was lucky enough to track down the rest about 5 years ago for much more reasonable prices.  If any of you try to track them for yourselves, I wish you success in your efforts.  Happy Gaming!