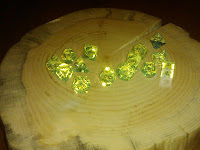 This past weekend, I went to the Montreal ComicCon and I managed to pick up two 7-piece sets of Gamescience Dice.  I've always loved Gamescience though, I only had one set of 'hand-me-downs' which I seldom used but I've borrowed sets for use from time to time over the years.  I had looked at the possibility of ordering some in the past since I could never find them local to me.  Sadly, I felt that the shipping was always too high to be worth pursuing given that I had tons of dice already.  However, between finally being able to purchase some shiny Gamescience which I can call my own and other things that has been happening, I believe the stars are aligning for a fantastic old school experience in the months ahead!

For example... Like those particular dice, in the past twenty five years, I have used mini's at my gaming table, though more so in recent years for the visual aids for some of the lesser experienced gamers in the group.  These were pre-painted though.

While some in the gaming community disliked the WOTC offerings in the past, they suited me just fine for my games having been pre-painted and ready to go.  The biggest complaint towards those were the fact that these were random and one was never sure what you were going to get.  Since any given miniature in a line was common, uncommon, or rare (and ultra-rare), a good selection of miniatures meant a hefty investment.  On the flip side, they were ready to be used outside the box and even had a mini's based game attached to it.  It was eventually discontinued but it now looks like Paizo is doing something similar.

With the Kickstarter that Reaper recently did for their Bones line, I will be getting a whole whack-load of plastic miniatures coming in and they are all unpainted.  I've just inked my Gamescience dice and now I'm looking at doing a lot of painting in the months ahead.  I have a small selection of metal miniatures to start practicing and will probably start getting some gear towards the end of this week.

To top all of that, with the Sword & Wizardry KS which recently came to a close as well as other similar funding efforts, such as Rappan Athuk, Barrowmaze II, and the Dwimmermount -- I'm looking to starting a regular and long term mega-dungeon campaign.  Given that I already have Rappan Athuk in digital form and that I'll likely be receiving my physical copies for that first, it remains as the strongest candidate thus far to use as the basis of my campaign.  In all my years, I have never bothered to try and run a persistent and ongoing mega-dungeon campaign and I suppose there are a few reasons for that.  However, given that I have two campaigns on hiatus due to player availability due to the nature of the story and roles the character plays, I wanted to start doing a game where people can possibly pop in and out from session to session and I figured that this sort of campaign may be the best way to do it once I make a couple of tweaks.  I figure the party will have to return to and from the dungeon on a regular basis and this will make things simpler for character transitions from session to session.  I do expect more than a few deaths in this campaign.

One of the things I will also do is buy a nice (though inexpensive) journal for the players / characters to write in as an ongoing chronicle.  That in itself will be neat to see.  As the campaign progresses, I'm sure to start using some newly painted Reaper miniatures and have a lot of fun rolling those inked Gamescience Dice!

In any event, I'm anxious to get this started up and, who knows, if I get on a roll, maybe I'll also do some online sessions for the campaign.  At the very least, I'll be sure to post some session notes.