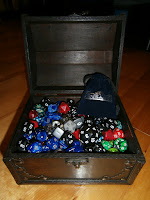 We are now in the Fall season which means a variety of things for different people.  Some seek to finish off various projects before the end of the year and others begin to think of new projects or goals for the next year.  The approaching holiday season will be ever present in the back of many people's minds.  All of this is, of course, very much the case for the gaming industry.

Whether you are a larger company or mid-sized one or even a small or hobby publisher/developer -- this is a big one.  I got a couple of queries myself about releases Arcana Creations has in the works for this quarter and I look at various other efforts going on and some of it, quite frankly, gives me pause.

Kickstarter has really shaken up things for our hobby this past year and, by now, some have resulted in finished products and have made their way into the hands of backers and into retail distribution chains.  I'm still unsure of how this effects retail distribution in the grand scheme of things though.  Will the traditional bump in sales which debut around GenCon and the following months leading up to the holiday season become affected as more and more game publishers look towards funding projects through Kickstarter?  Or will late Kickstarters suffer from the impending holidays because of fewer dollars going to back these projects in favor for the various expenditures that this time of year brings?

In the past months, I have continued to observe and try to keep current with various efforts in the gaming industry as I try to keep mindful of my own projects.  There are some companies whose products I prefer as a consumer and gamer that I pay closer attention to.  Troll Lord Games is just one of these companies.

Troll Lord Games was founded in 2000 just at the outset of the d20 boom -- their initial releases was for 'Sword and Sorcery RPG' which they were working on but they quickly retooled their material for d20 and 3rd Edition.  They had some success but an early partnership with Gary Gygax also brought them increased attention from a variety of fans.  In 2004, they introduced Castles & Crusades and it looked like the company was really getting its stride.  More people discovered the game and things looked promising for TLG.  I came across the game in 2006.

Troll Lord Games ran into a series of problems in 2008 though.  A 4th Edition of D&D was released, Gygax passed away, and the license to produce his material was dissolved.  This meant no more Lejendary Adventures... no more Castle Zagyg and Yggsburgh... no more Gygaxian Fantasy World books.  All that the company had left to bank on was Castles & Crusades and the only solution was to try and grow this and other 'Siege Engine Games' and they made a good go at it.  The following couple of years saw some releases -- new printings to the core books and expanding the line with other books.  In 2011, the only significant release was the Castle Keeper's Guide -- a veritable stone around the company's neck.

This year has been different for them though.  They have been able to release multiple key products and more are coming out between now and the end of the year.  For the first time, they have released a full color Player's Handbook for Castles & Crusades (this PHB is the 5th printing).  The projects they have on the horizon are several and, they all seem within reach.  I don't think I have seen the company as productive as it looks to be right now.  This is great news for that company and good news for any fan of TLG.  I know that Kickstarter also helped for a couple of these projects as well, and this as well as other similarly run pre-orders are keeping the gears and machinery nicely greased.

It seems like the company has 'grown up' and, while it might be a weird thing to say, kinda distant.  Worse yet is that I can't even begin to explain 'why' I feel this way.  'They' are constantly posting comments, sales, updates, and quirky blog stuff on a regular basis so it's not a 'lack of communication' though maybe it's a lack of 'meaningful' content in their communication.  Frankly, it feels like a clubhouse that I used to be a member of but now is no longer the case.  They have successfully transformed into a company interested in selling me product as opposed to fellow gamers who are developing some great stuff.

While I am putting out a couple things before the end of the year, I don't feel pressure or a 'need' to keep up with the momentum of how other things are going.  I'm just a gamer who is developing some cool stuff.  At then end of the day, it means that breaking even is pretty cool and if more money comes in, it just means I can be in a position to do more.

Momentum for AC has been steady this year and it promises to be a very interesting 2013.  May we all keep our dice rolling away!