Not Backing The Codex Celtarum? 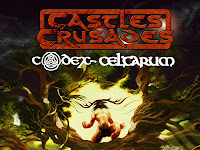 For those long time readers of the blog and those who know me, they know that I like Castles & Crusades and the various products that Troll Lord Games release.  As a fan, I've also been critical but fair when it comes to taking a good look at what they put together and, for the most part, I've always been more than satisfied with their offerings.

Of course, with any release of a game of this nature, there is only so much that can be released while remaining fresh and interesting -- a challenge which many a rpg publisher strives to meet head one.  One very obvious tactic is releasing new editions of a game and sometimes this can work well and other times, the effort will fall flat.  Some will consider Wizards of the Coast (for example) to have really struggled with this one which is why they seem to be treading oh-so-very-carefully with the newest edition being worked on.  You see, for some gamers, you question the necessity of buying additional books beyond the 'core set' -- whatever that core set of books may end up representing.

For C&C, the really comes down to just a couple of books.  These are the Player's Handbook (which has seen several printings with tweaks along the way) as well as the Monsters & Treasure book.  In the years since the original release, you have some which will consider the Castle Keeper's Guide to be as significant and possibly 'core' and others still that would include more recent publications to be just as significant releases in their own way -- the Classic Monsters book being an excellent example of this.  Beyond these sort of books, you also have the published adventure modules, campaign specific material, and even other product lines which share a connection with C&C or the Siege Engine.

If you are a collector of sorts, you may end up getting a lot of this stuff but you may come to a point where you ask yourself, do I really need a book with new monsters, spells, and classes?

With the Codex Celtarum, I have to give TLG some credit -- the book does sound interesting and it will appeal to many fans.  The latest TLG product I got my hands on was the Amazing Adventures book but there have been a few releases since that I haven't had much of a desire to try and get.  I'll probably get them eventually but I'm certainly in no rush for them at this stage.  However this new sourcebook seems interesting, despite the promise of new spells and monsters.  The reason for this is the context of all this new material and how it relates to the Celts, druids, the wilds, and mythology.


Sometimes, it's just how a subject is approached I guess.

They've launched a Kickstarter for it which you can see HERE with a very modest goal of $4000.  Then I looked at the pricing / reward structure and, despite the fact that I would like to add this book to the collection, I was immediately turned off.  The book has an estimated MSRP of $27.99 but to get a physical copy (which includes a digital copy as well), you will need to shell out $40.  If you live in Canada, add another $12 (it used to be higher but an update amended the shipping costs) or $20 if you live outside North America.  That's sadly way too much given what this will be selling for in stores and, unless there's some interesting stretch goals that get added on, I think many C&C fans living outside the US will be passing on this Kickstarter as well.  Maybe an interesting stretch goal or two may help.