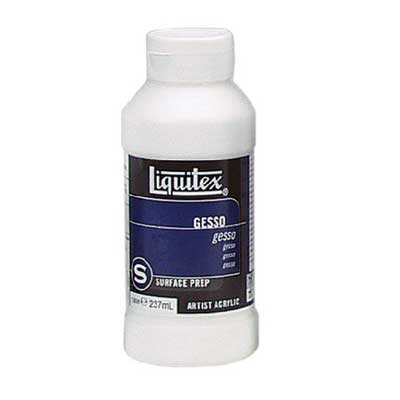 I haven't been posting as much as I would like to the past few weeks but I haven't quite been idle.  As always I do try and get some painting in when I can though never as much as I would like.  I do have a couple other things on the go -- including the launch of a new C&C campaign later today.  Some of these thought, opinions, and activities will eventually find their way onto the pages of my blog.  One of the things I wanted to check out was working with Gesso in relation to painting with miniatures.  For some experienced people in the hobby, they will already be familiar with this and opinions are pretty split on the practicality of it.

For those who don't know -- Gesso originally was a medium comprised of glue, chalk, and white pigment used to coat rigid / rough surfaces to present a surface suitable to paint on.  Surfaces such as wood paneling were often prepared in this manner to be used for the purpose of a painting.  For the purposes of preparing a canvas, an emulsion of linseed oil and gesso was used since gesso on it's own could easily crack if not applied on a rigid surface.  But this is traditional gesso.

A lot of artists today will use something which is a form of acrylic gesso to prep their canvases for painting.  This type of gesso, despite carrying the name, isn't really gesso at all given the chemical makeup.  However, what it does do is very important and pertinent and, after some research, deserved some testing.  Notably, it coats and bonds to a variety of surfaces and, once dry, adds 'tooth' to the surface which paint will adhere to.  Basically, this stuff is a primer.

Many people who are into painting miniatures will know the need to paint their pieces with a primer before they think about adding a base coat of paint.  This usually involves a can of spray paint formulated for this purpose.  This isn't regular paint though -- the composition once dry provides a better surface for the paint to bond to.  Since this comes from a can though, a propellant is used and there is a very noticeable odor involved.  Between the smells and chemicals and the misting paint coming out of the nozzle, you pretty much are restricted to do this outside or in a very well ventilated area.  In other words -- not inside an apartment.  Living in Canada, and only getting into the hobby at the start of the fall, this presents a bit of a problem come winter.

I had given thought about other alternatives to those spray cans but hadn't had much luck in the past few weeks.  I was running out of varnish (also from a spray can) but I opted to get some liquid varnish which I could just use through my paint gun to at least eliminate that spray can hassle.  This need brought me to my local art supply store and when I was looking at the section for varnishes, I saw the gesso.  As soon as I saw those bottles, it dawned upon me that I may have found what I was looking for.  I knew what gesso was because of friends (as well as an ex) who painted so I had some knowledge of its properties.  After doing a quick bit of research, I realized that a few others were doing the same sort of things.  It seemed promising enough to pick up a small bottle to test it out.

Well, the first thing I did was find a miniature that I didn't mind using as my test subject and I proceeded to do something which I shouldn't have done.  I decided to coat the miniature nice an thick.  Gesso was used as-is straight out of the bottle. 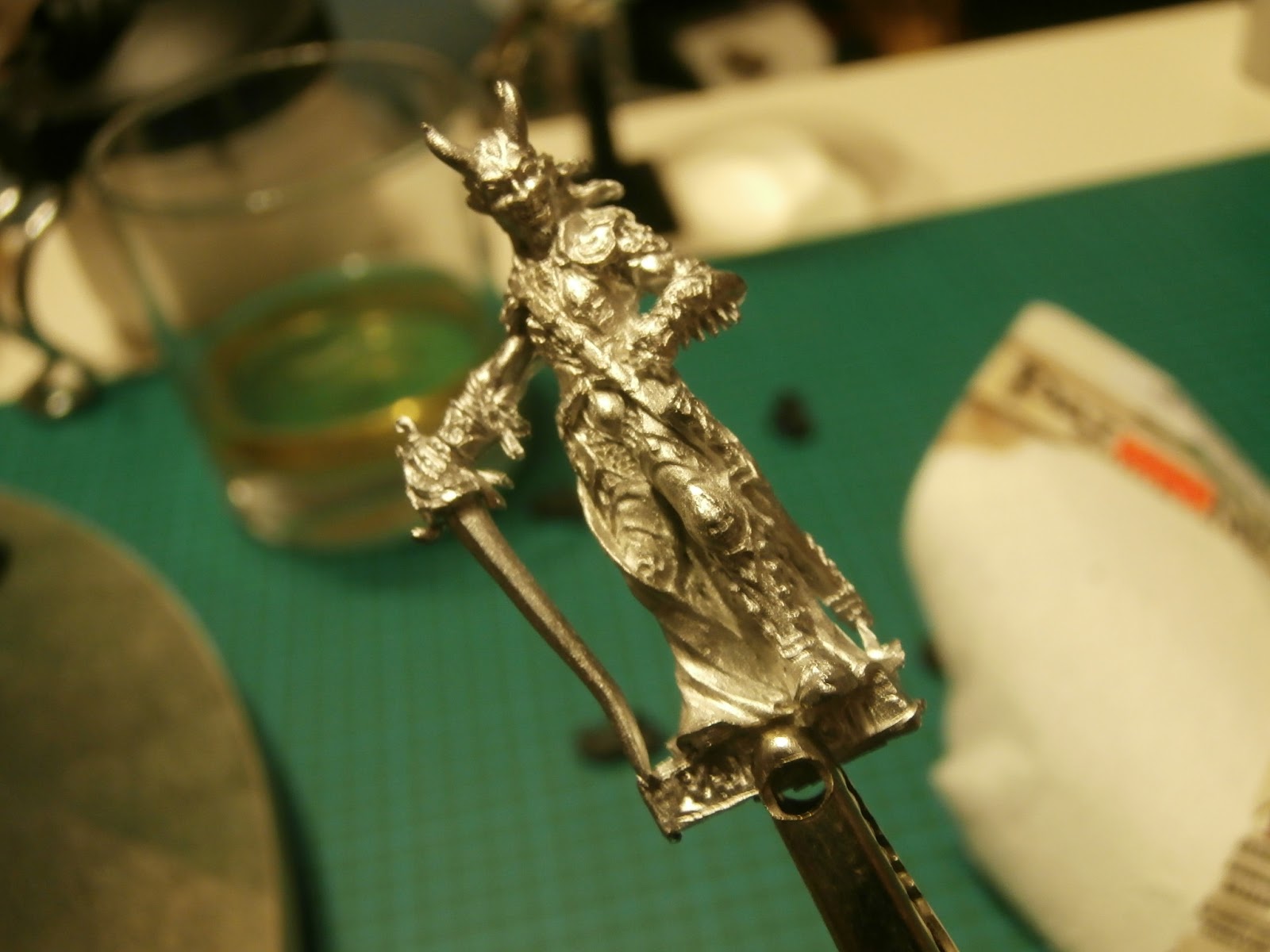 After the generous coating: 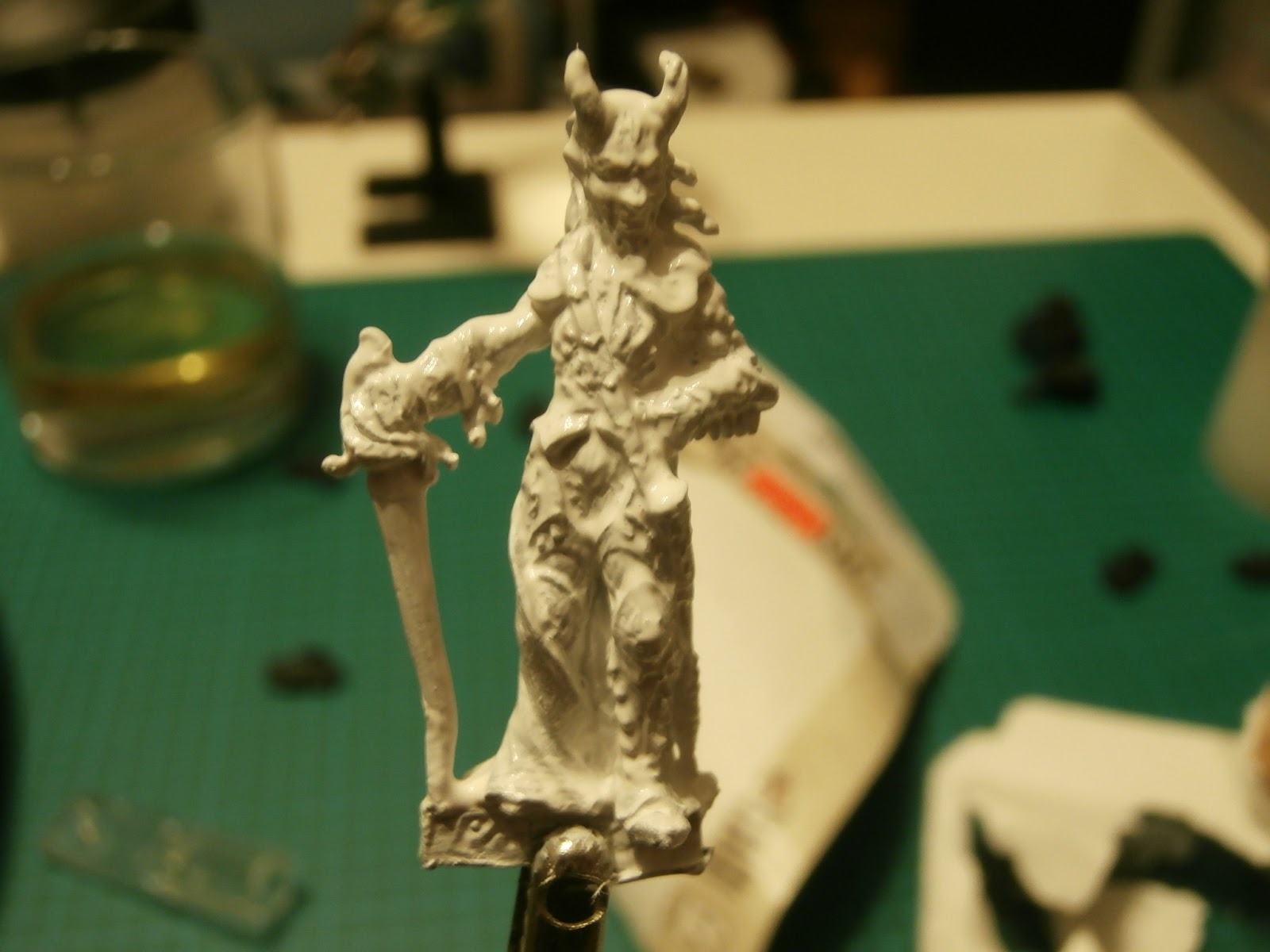 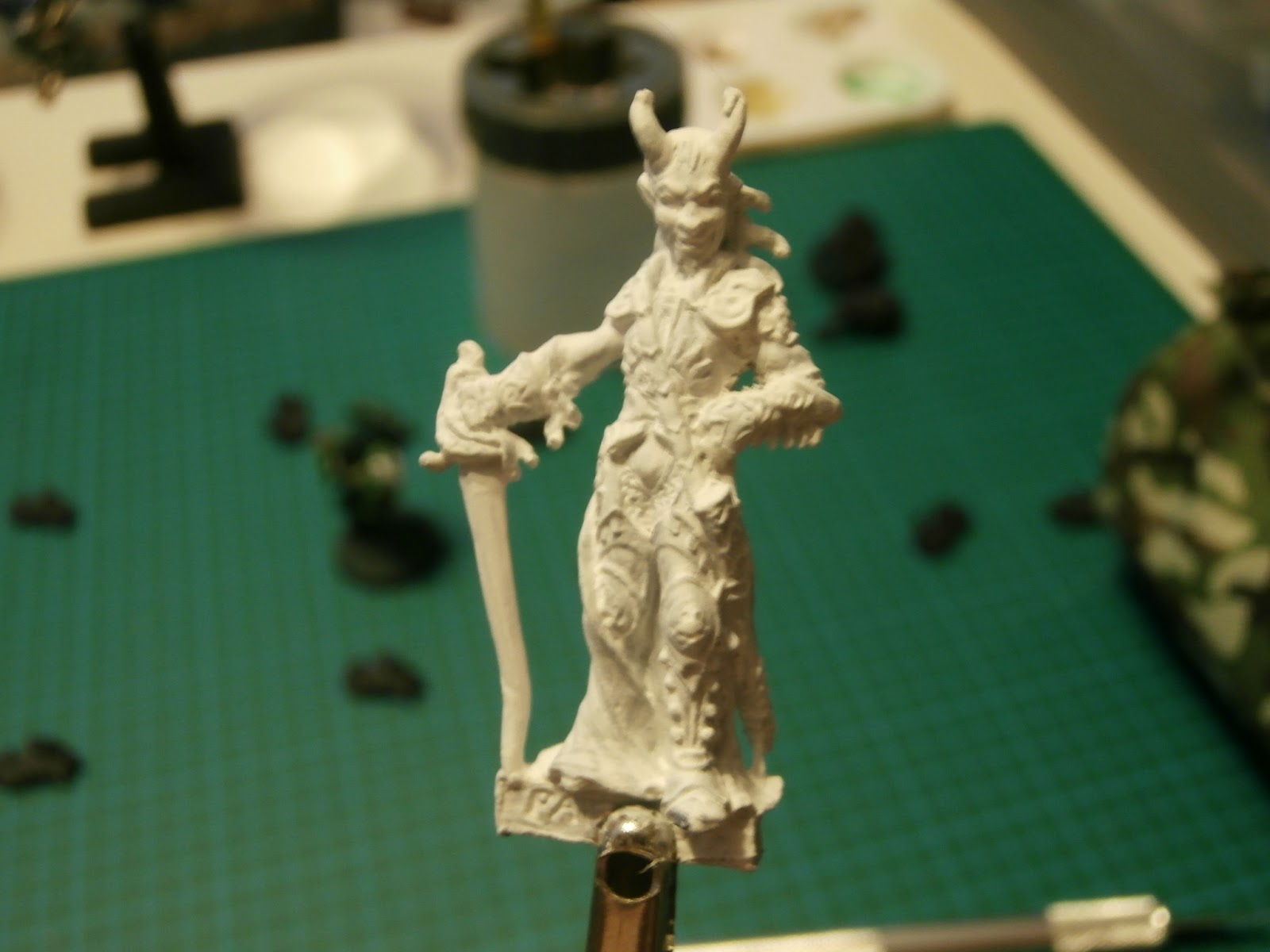 Despite the thick application of the gesso, I was relatively pleased with how it dried and tightened up on the miniature.  There was some loss of detail (though fairly minimal) but that was hardly surprising given how I painted the stuff on.  I decided to strip the mini of the gesso coating and a good 24 hour bath of pinesol with a bit of scrubbing afterwards cleaned it up perfectly with no issues.  My subsequent test was involved a light coat of a slightly watered gesso mixture (about 1 part water and 4 parts gesso): 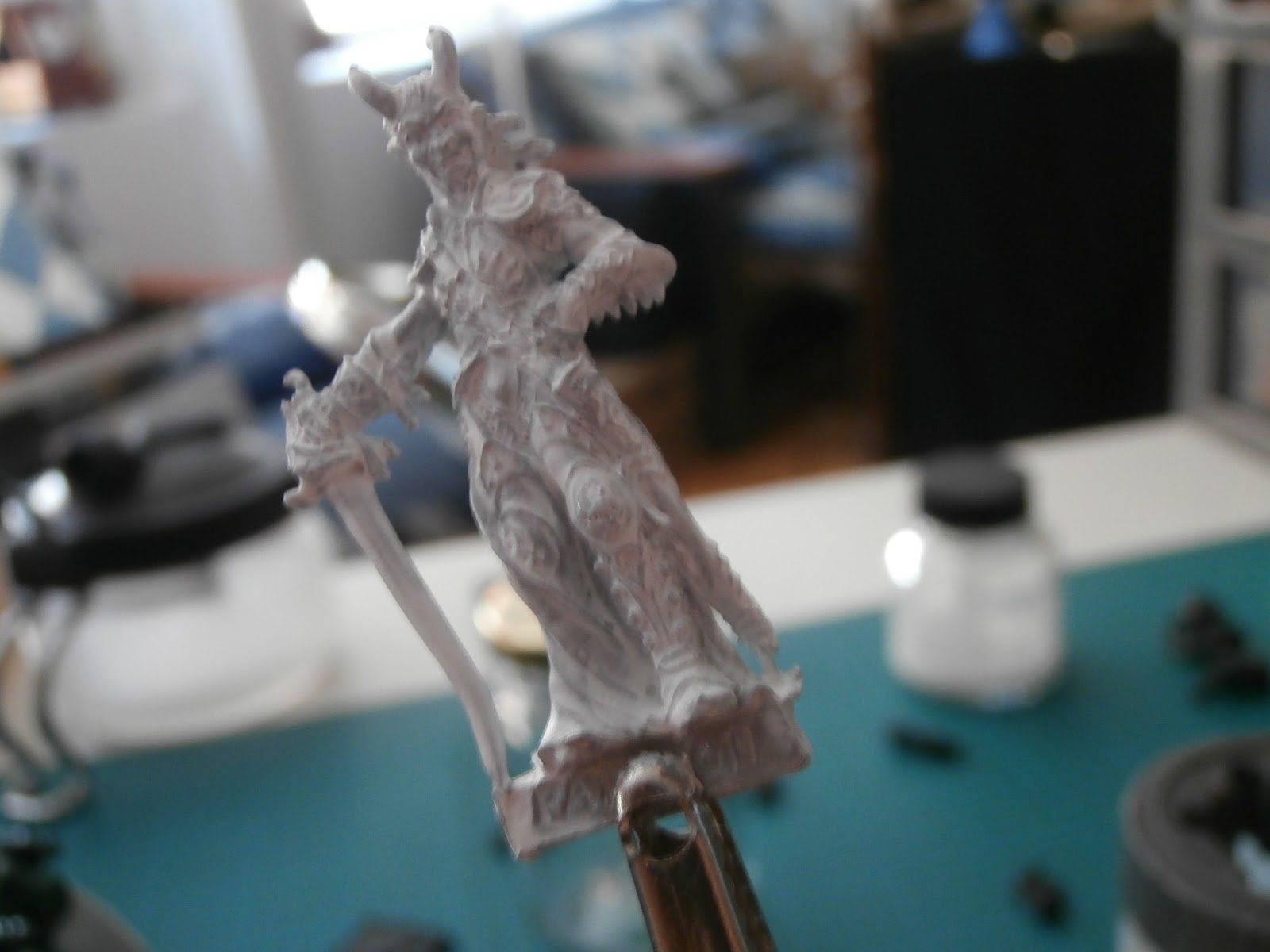 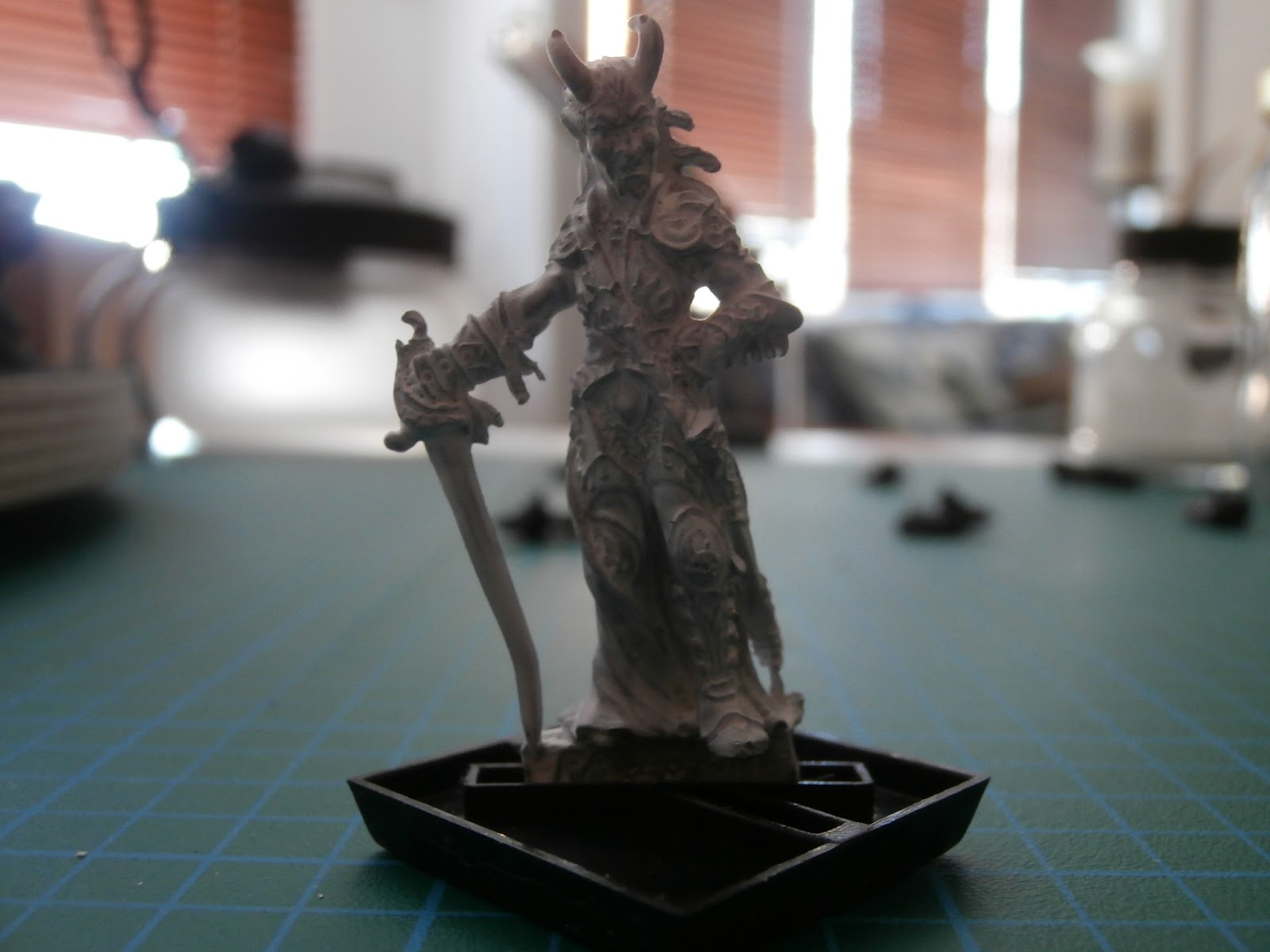 All in all, I think the test was a success.  The details of the miniature are intact and while some areas are thin enough that there the residual color of the metal coming through, it is still coated.  Some may feel that another coat of thinned gesso could be required but I would be inclined to paint it as it is right now.

The only other test I would be curious about is using the thinned gesso and shooting it through a paint gun but I'm not sure if it is 'thin enough'.  Unfortunately, a mix with anything beyond 25% water could thin it to a point where the gesso is no longer able to work as a primer and something too thick can cause problems if trying to shoot it as opposed to paint it on with a brush.

The good news is that this looks to be a decent solution to drop the use of spray cans altogether.