Some weeks back, Games Workshop was having a sale on some of their fantasy-based scenary.  For anyone that knows Games Workshop products, this is very much a rarity and I decided to take advantage of it.  While I like miniatures and some props for the tabletop, I wasn't ever really big into scenary and, in part, the expense usually tied to it is the biggest deal breaker given how often one may end up using it.  In this case, I think the price was low enough to at least give it a shot.  One of the models from the lot is called the Dreadfire Portal.

It seemed pretty cool and not too difficult of a paint job to do what I wanted to do with it.  It's essentially a set of stairs that go up to a dias and the stairs themselves are held up by carved rock.  The carved rock are reapers and, while I have seen the model with these painted, I decided to just stick to a rock-like paint job and stairs which form up the majority of the model.

But before even starting to paint the model, I had to put it together.  I haven't had much luck with Games Workshop models and out of 5 kits I've opened to assemble and paint, 4 of them needed some work.  The plastic on this one was warped and had to be modified.  The model was cut from the sprues and cleaned up and, after it was glued together, a fair bit of greenstuff was used to fill the very obvious gabs.  Priming was a simple matter of stepping out on the balcony and spraying Chaos Black.

I still had a bit of misfortune though.  At one point I accidentally knocked it down from my worktable when reaching for something else on my desk.  A couple pieces broke off and it had to be re-glued before painting could begin.  Between the assembling and correcting of the model, priming, and then repairing the model, all this lasted twice as long than the actual painting did.

The key paint used for the base coast was 'Mechanicus Standard Grey' from the Citadel paint line.  The majority of the model needed this shade of grey and, aside from the dias, skulls, and flames, little else was needed.  The skulls circling the dias, the arches in the base, and on top of the pillars were done in 'Ushabti Bone' and the spikes, metal rings, and skull symbols in the dias was done in 'Gehenna's Gold'.  'Mournfang Brown' was used on the rest of the surface of the dias.  The blades on the scythes were done in 'Lead Belcher' with the blade edges down in 'Runefang Steel'.

With the exception of the flames and scythe blades, the entirety of the model was shaded using 'Nuln Oil' with a more generous amount applied to the skull ring and skull arches.  Afterwards, all stone received a drybrushing of 'Terminatus Stone', one of the dry compounds from Citadel.  The effect was turned out to be even better than I could have hoped for and looks amazing for something that was simple to do.  I also did some drybrushing on all the gold using the 'Golden Griffon' dry compound.

The flames were a concern initially but it ended up being a lot simpler than I thought.  Flames can be difficult to do well and I think it worked out well enough.  The flames received a coat of 'Averland Sunset' and I used a touch of 'Lugganath Orange' at the very base of the flames.  The flames got a wash of 'Fuegan Orange' while the model was upsiade down to allow the flow to come 'up' on the flames.  I touched up and brightened up the model and drybrushed with a bit of 'Kindelflame' followed by a wash of 'Casandora Yellow'. 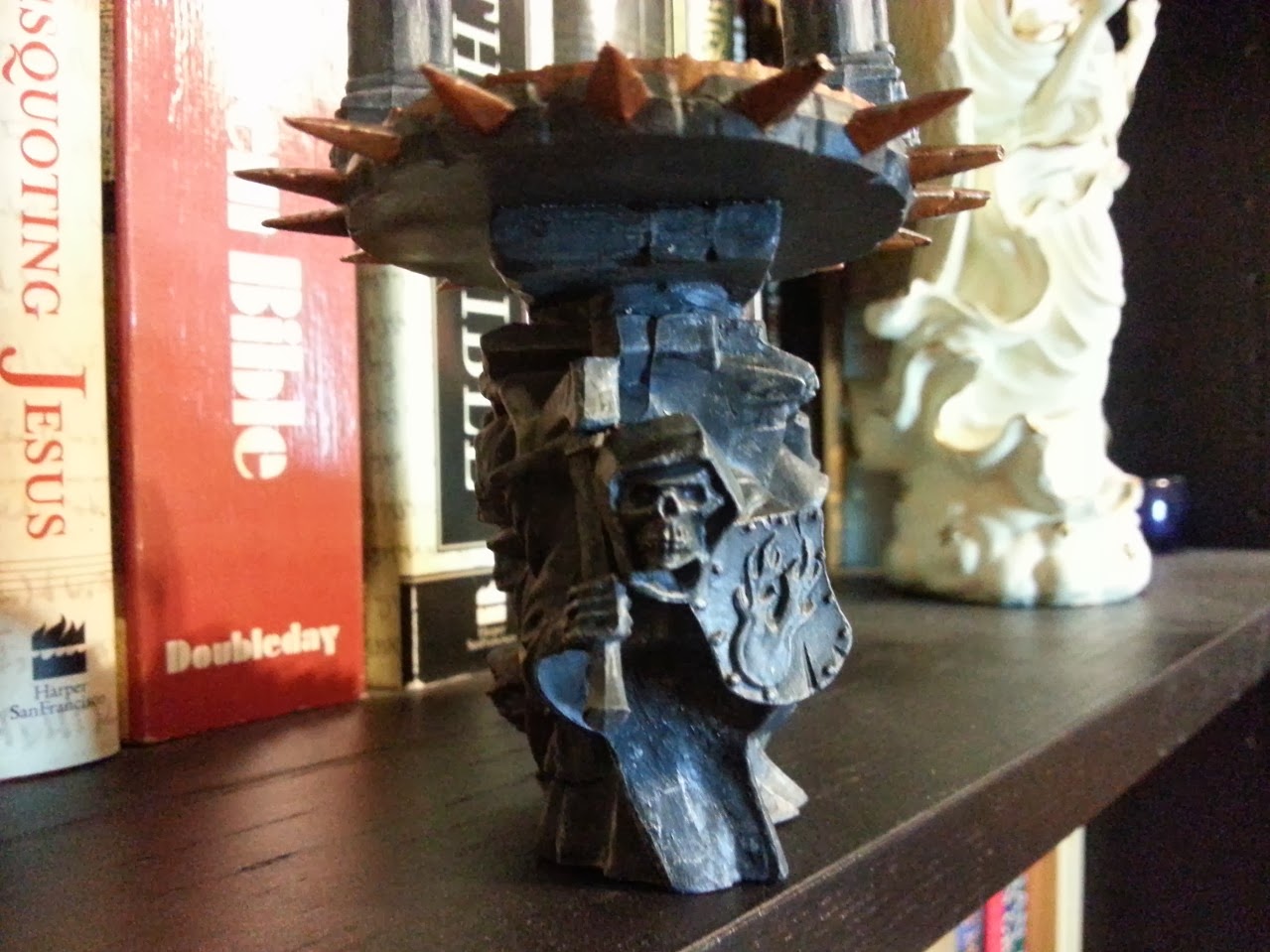 With the model dry, I used a glossy varnish for the flames, dias surface, and scythe blades.  The rest of the model received a coat of matte varnish.