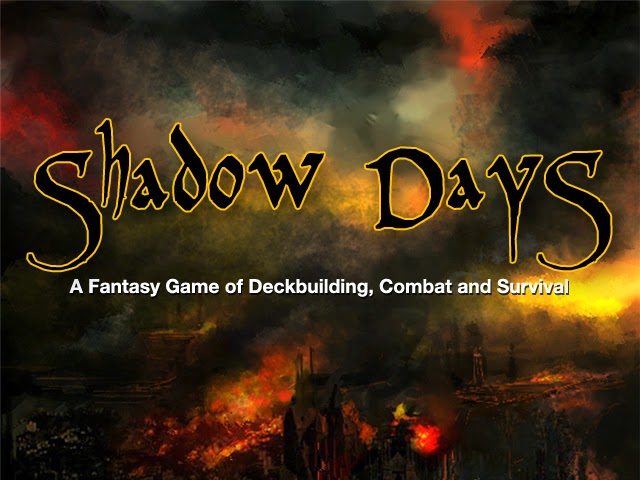 Shadow Days is described as a Fantasy themed, deckbuilding, strategy game which supports 2-4 players and lists the playtime as 30-40 minutes.  For people who have had a passing fancy with collectible cards games such as Magic: The Gathering, the fact that there are still games being done that tries to capture the allure of this very successful game says something 20 years later.  As someone who has played and enjoyed this sort of game, I am always hopeful to find something equally as enticing but without the collectible angle.  After a 4 player game and over 2 hours of play, I have to say that this game isn't it.

Shadow Days does have some nice things going for it and a fair bit of potential.  First of all, the fantasy artwork for the cards is quite nice... I liked many of the pieces and, much like the artwork on those old magic cards, they do the job quite nicely to evoke the fantasy vibe.  The text is fairly clear on the cards though a bit small and inconvenient for opposing players sitting across a table.  The rules are easy to understand and can be picked up quickly when dealing with new players.

Each player has a maximum of five active cards before them which are typically creatures.  These are random and they are refreshed should any of these creatures get killed.  Each creature card has four major values... Hit Points, Attack Points, Gold Points, and Life Points.  In the combat phase each player selects one of their creatures and picks a target belonging to their opponent.  If the creature's attack points are equal to or greater than that of the target, the target is killed or destroyed.  The winning player is rewarded the gold point value and the losing player loses life points.  Each player takes a turn for combat and once everyone is done, each player then gets to 'regroup'.  The regroup phase is a chance to replenish cards lost, buy equipment to further enhance your forces, buy a stronghold, or hire a hero or villain.  Once the regroup phase is done, it's back to the combat phase and you play turn after turn until there is only one player left in the game with life points remaining. 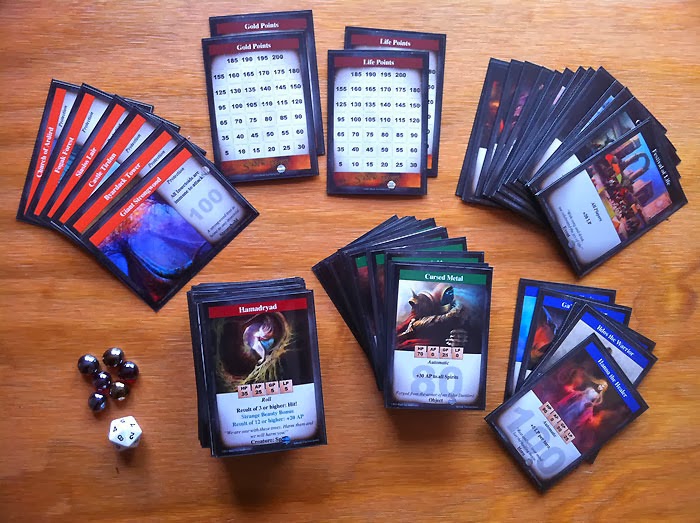 The problem with the game quickly becomes apparent the longer you play a match.  As I mentioned, my first game was a four player game and it lasted over two hours.  A couple of the players quickly grew bored and frustrated and the lack of decisive action in the game.  After a few turns, most players had bigger and more powerful creatures which helped make the player untouchable.  This meant that the player that got the weaker critters drawn by chance were quick prey for the other opponents.  However, with a simple 5 life point loss and a 5 gold point gain, the game ends up painfully slow when gaming with four players.  This is because each player stars with 200 life points and most purchases only start at 60 gold or higher and you only attack once with a single creature every combat round.  Sure, there are random event cards to stir things up but, early in four player game, these can do more harm than good and generally will slow the game even further.

After the game, I gave it some thought and there are some easy ways to fix all of these problems and speed up game play without drastically altering the core design.

Here are my house-rules to improve Shadow Days:

Other options:
I think with these house-rules, play time will greatly speed up and no major alteration needs to be done for the game.  However, the Strongholds seem to be a waste of gold aside from being a reserve you can pull from in lieu of pulling other active cards.  They confer a protection bonus to a certain creature type where they become immune to attack but they can't be used while in a Stronghold either.  I'm note sure it's worth playing with them unless there was some other game advantage to using them.

All in all, the game deserves a shot if you can overcome it's obvious deficiencies.  It is not quite a deckbuilding game but you take what you have and improve your odds by selecting heroes, villains, and equipment to better accomplish your task.  The theme is just a theme and doesn't really add to the game and the mechanics are very basic though you often have exceptions and bonuses in addition to the standard text and game mechanics.

It should be mentioned that Shadow Days was one of those Kickstarter projects and, while delivery was initially slated for August of last year, people only started to receive their games over a year later -- in my case, I received my game at the end of September.  I don't regret buying the game and will be playing it again but I would be hesitant at the MSRP for the game which is presently $30 USD.  The Dark Star Expansion for it (I played with both the base game and expansion) is an additional $15 but you can buy both together for $40.  While nice, $40 seems a bit much to drop on a card game.