What follows is not something I wrote but something I felt makes a lot sense to me and I think it will make sense to some of my readers out there too.  It's reposted with kind permission of Brendan Myers, writer and designer of the Fellwater RPG I wrote a bit about a few days ago, which you can check out HERE.


How Games Tell Stories, and How to Turn a Story Into a Game

Good games are games that tell interesting stories. Any kind of game can tell a story, from ancient classics like Chess, King’s Table, and Go, to complex military simulations like Warhammer. Characters appear; problems beset them; solutions are sought and struggles are endured; and events in the world unfold. At the end of the story, the original problem might have been solved, in a glorious victory. Or it might remain unsolved, in ambiguous stalemate or tragic defeat. But in either case, a story is a character who changes because of a problem.

In games, of course, the characters are the players, and they change by growing stronger or weaker in the course of play. And the problems they face are the competing players. The story might be so short it could be told in a few sentences: “A leader raised an army, and went to the field of battle to face a terrible enemy. The armies fought each other with all their might. Great acts of heroism were seen, but also great acts of treachery and cunning, and many men on both sides died. Eventually the leader and his army won the day.” That story could describe real-world battles like the Siege of Stalingrad, or mythological battles like the events of Homer’s Illiad. But it could also describe the events of a session of Dungeons and Dragons, or a chess tournament, or the Super Bowl (although one would hope that no one really died). In every case, there’s a story being told.

It’s easy to see how a story can emerge from a game: the act of playing the game is basically the same as the act of telling the story. Less easy to see is how a game could be made that replicates the events of a story that has already been told. Such games, of course, are commonplace: video games based on popular films are the most obvious examples. There’s also war simulation games, for tabletop and for computers, that replicate various historical battles. But games based on pre-existing stories present new challenges to the designers.

First of all, stories are made of words, sentences, descriptions, characters, plot arcs, events, feelings, and dramatic experiences, and the like. Games are made of those things too, but games are also made of numbers. Chess pieces, for instance, have a capture value, and a mathematically quantifiable movement function. Characters in an RPG, and units in a military simulation, have hit points, attack and defense values, movement rates, and other numerical attributes which define how they behave, and how much of a challenge they present to players. So the game designer who wants to turn a story into a game has to find a way to tell a story using numbers instead of using words alone.

Here’s another challenge for the designers. A game based on a pre-existing story can offer players only one way to win the game: the players win by replicating the events of the story, and they lose by failing to replicate that story. Now, it’s not hard to understand why such games are popular, even though the victory conditions are so specific. After reading the Harry Potter books, for instance, one might want to explore the wizarding world on her own, and become Harry or one of his friends, and achieve Harry’s victory for herself. After reading some military history, you might want to know what it felt like to be General Eisenhower or Prime Minister Churchill, planning the Normandy landings. But the players and the game designers already know how the story ends – or how it “should” end. It ends in exactly the way the story says it ends. That is the very meaning of that kind of game. But the game designers still have to offer an unique experience to players. They have to offer interesting challenges, meaningful freedom to act and to strategize in the course of play, and real prospects for failure in order to make victory feel sweet. This creates a kind of paradox: the game has to offer that freedom and challenge to players, but at the same time it must preserve a pre-ordained conclusion.

I’m a novelist as well as a game designer. This summer, while finishing my third novel, it occurred to me that a tabletop RPG that I had been tinkering with for almost 20 years could be set in the same world as the novels. And that’s how I discovered those two challenges. I’d have to find a way to tell my story using numbers as well as words. And I’d have to find a way to offer freedom and challenge to the players whilst preserving a specific narrative arc.

To the first challenge, I had to re-read my own books and look for anything that could be measured mathematically. I asked questions like: in what ways are some characters more powerful than others? Which characters are smarter? Which are better fighters? Which have more economic resources? And at first I was unhappy with this process. As a novelist, my characters are like people to me, and almost as real as my friends. And I didn’t like putting them into little mathematical boxes. But I remembered the arguments of philosopher David Hume, who observed that things are made of their properties (their size, shape, colour, weight, etc.), and it’s basically impossible to imagine an object with no properties. So although I didn’t like “digitizing” my characters, I sucked it up, and made the game.

The best solution to the second challenge was to offer players a kind of third option. Instead of creating a game where the only way to win is to conform to the story, I offered ways to allow players to tell a different story. Let’s call this third option “revision”. Sid Meyer’s “Civilization” series is an example of this: the game gives players a chance to “rewrite history”, just as its advertising slogan says. RPG’s based on films like Star Wars, or books like Tolkein’s “Lord of the Rings”, are also examples, when they allow players to create their own characters, and not just take over the role of Luke Skywalker or Frodo Baggins. Now this option may appear to defeat the purpose of creating a game based on a pre-existing story. The stories that players of my game will tell will be their stories, not mine. In the “revision” option, the game designers do not fix the narrative arc of the story that emerges from the game. Instead, the designers fix the “world” of the story. They fill in the background of history, and draw the maps, and lay out the social or political arrangements, define special terms or even whole languages, and in general they create the logical field in which all the player’s movements and choices have meaning. Thus, for instance, players of the Lord of the Rings RPG are not re-enacting the books or the films. They’re not re-telling the story that JRR Tolkien already told. But they are living in Tolkien’s Middle Earth. Gamers often find that to be just as satisfying as re-enacting a story from history or fiction. In the same way, players of my game will tell their own stories, but live in “my” world. And as a game designer and a novelist, I find that solution very satisfying, too.

Brendan Myers applies what he talks about when going about to create his new game, the Fellwater Tales RPG presently being Kickstarted.  You can find out more about the crowdfunding efforts HERE. 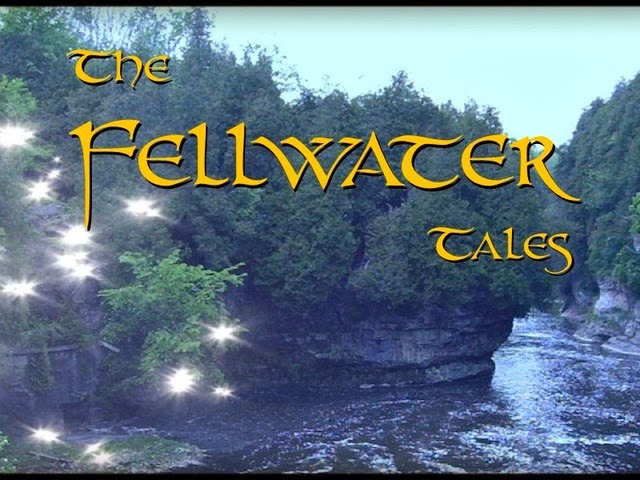