It's been some time since I've posting a painting guide and sometimes, time is a huge factor.  I wish I had more time and energy to paint.  But once in a while, a project comes along that you really want to do.  Honestly, when you've got a great model, the right tools, the right paints, and a bit of spare time, you can accomplish so much. 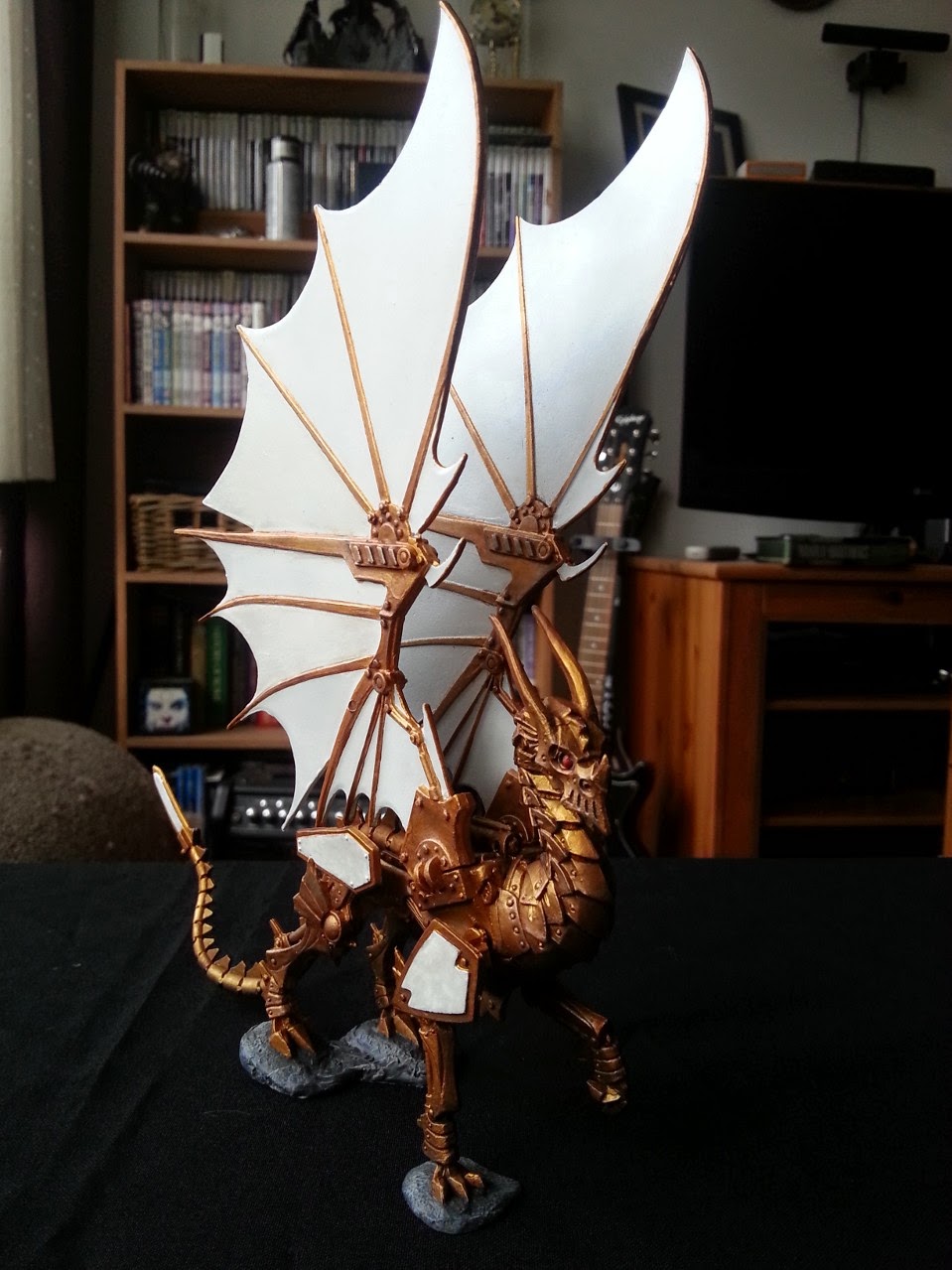 Earlier this month, I finally tackled Reaper's Clockwork Dragon which was released as part of their Bones lines and I picked up as part of their first Kicktstarter.  It came unassembled  (8+ pieces) and was really simple to put together but the plastic material was a bit warped so it would not stand straight and had a tendency to topple over.  Before I undertook much work, the first thing I had to do was do something about the base and I fashioned a larger one for both rear legs.  Green Stuff to the rescue! 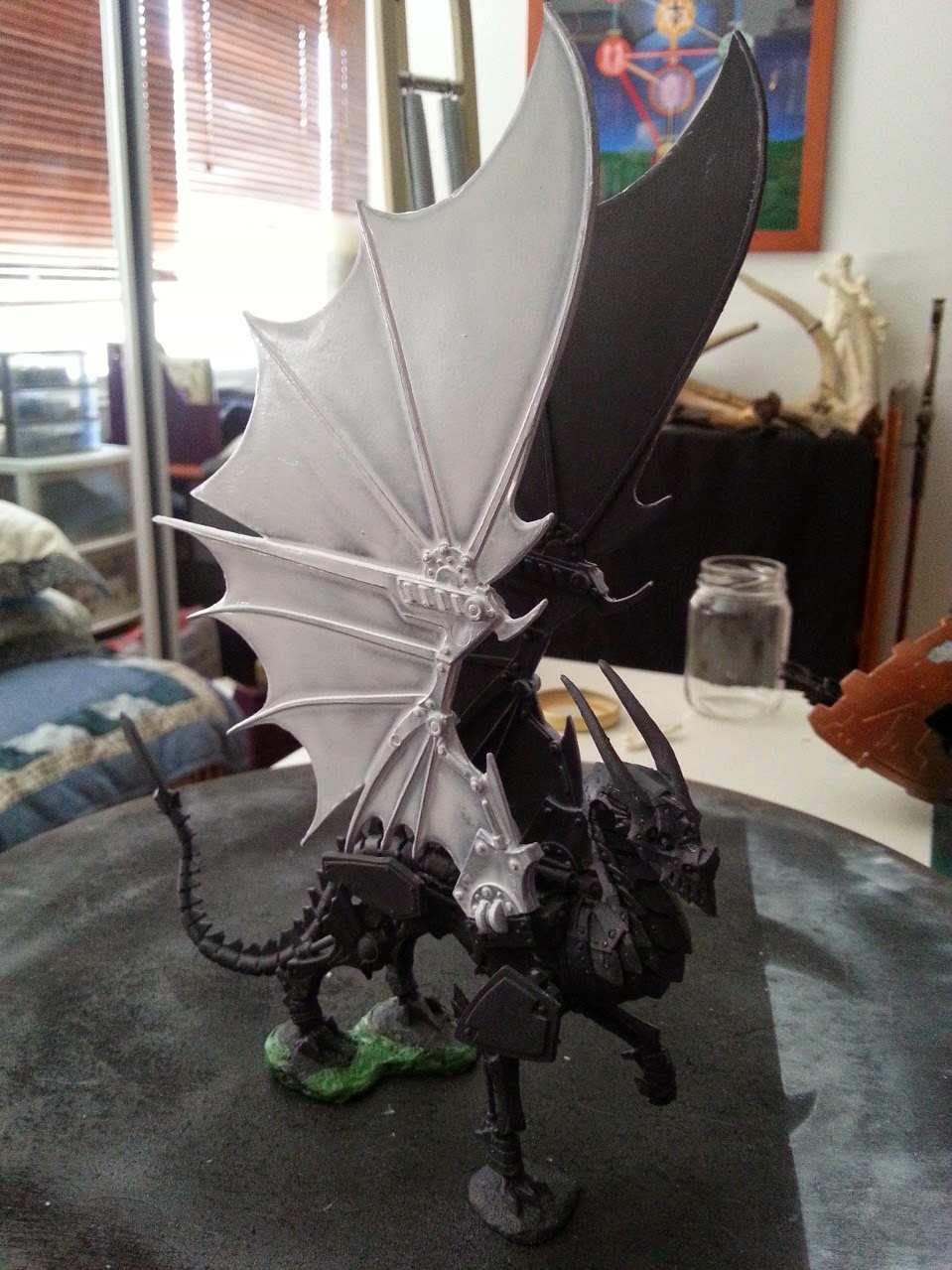 Priming the miniature was done using a dark grey acrylic gesso (my own mixture of Liquitex White Gesso and a store brand black gesso).

Painting the miniature couldn't be simpler in many ways.  I wanted to keep the paint scheme on the model simple and I figured a white and gold would be a great start.  As can be seen in the previous picture, the wings had already had a light coat of a 'Titanium White' on the surface of the wings.  The wings were separate pieces of the model and are only mounted in this earlier shot for the purposes of the picture.  For those familiar with Citadel paints, the closest equivalent would be the 'Ceramite White'.  The white paint was airbrushed on. 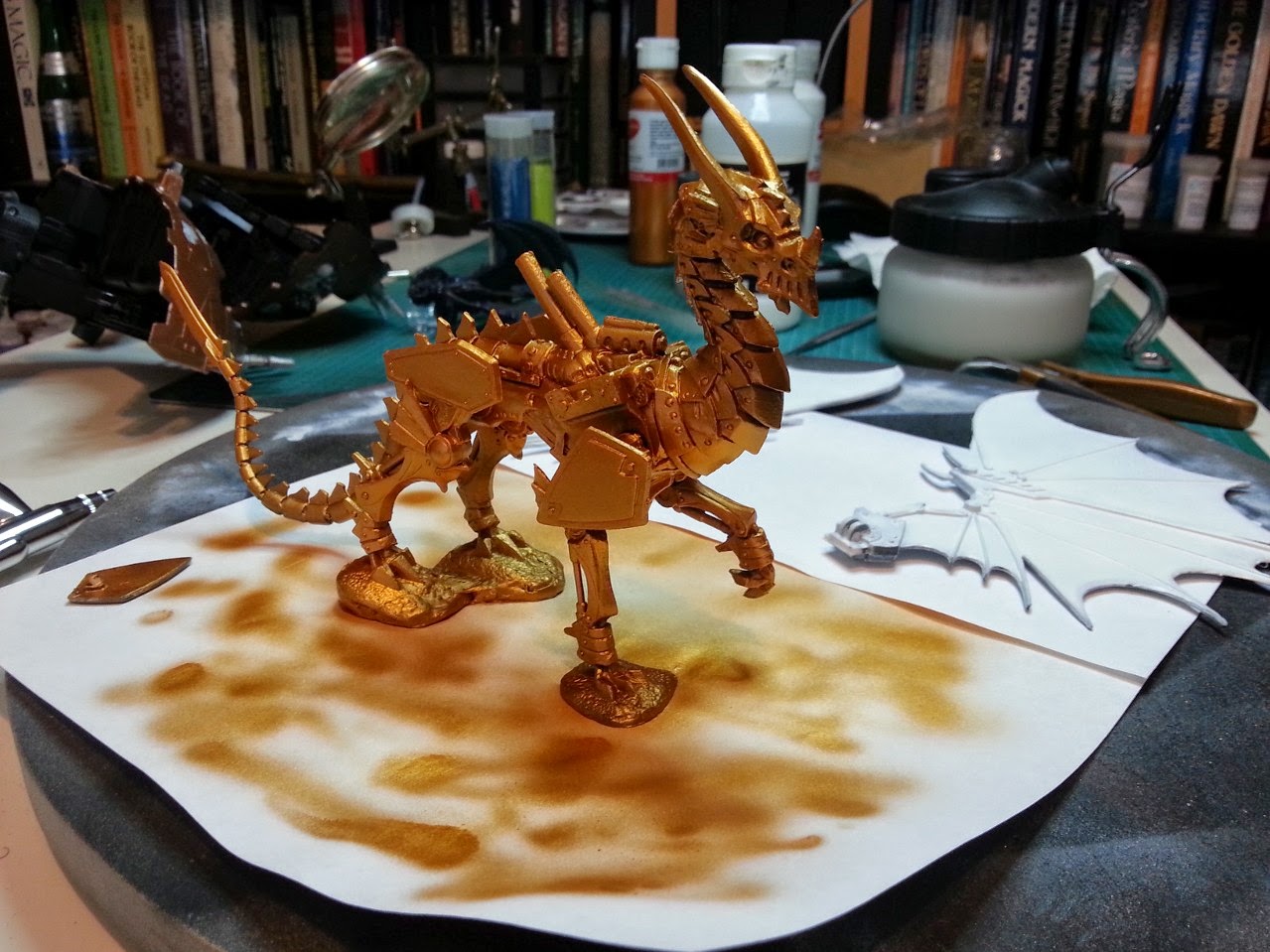 The gold paint I used was a beautiful shade of yellow gold called a 'Deep Iridescent Gold'.  I guess it would be close to Citadel's 'Gehenna's Gold' but not with quite the same shade.  I find some metallic paints challenging at times to work with but, once again, my airbrush came to the rescue and I got the base coat applied in no time.

The only real challenge when it came to painting the model was with the wings themselves -- or rather their frames.  This was the most time consuming aspect of the model.  A clean coat of white on the wings and the surface of the shields on the legs were also crucial for the next phase I had planned for the miniature. 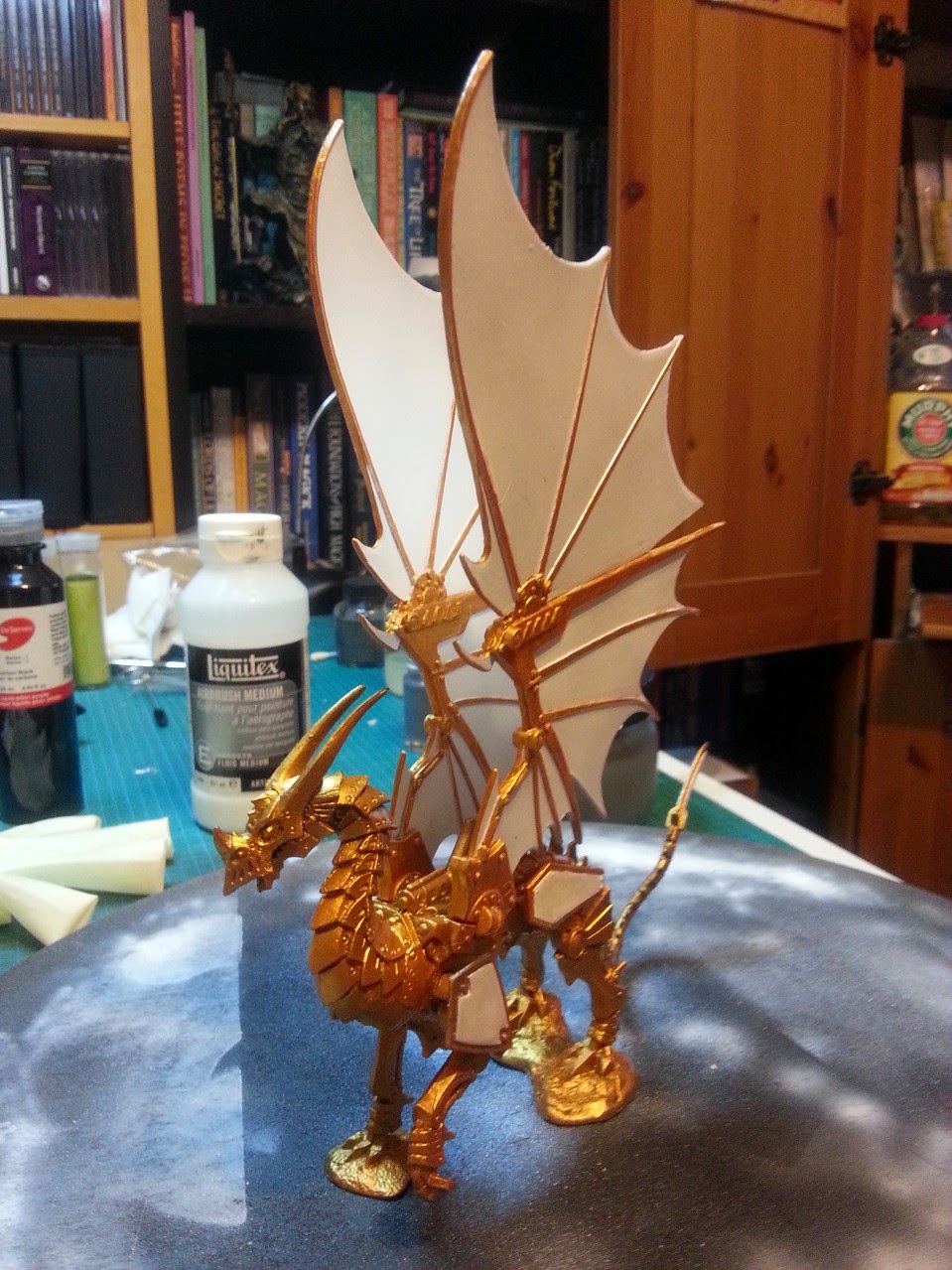 I had previously used an 'Iridescent Pearl' paint on a couple other miniatures and projects with great success.  It is classified as a 'semi-opaque' paint which means the under coating will be seen through this paint.  In the last model I used it on I did not expect the results I got (you can read about that HERE) but I had also seen the results on a white layer of paint.  The results are a nice pearl effect.  Exactly the kind of effect I wanted to have here.

With base coats and the pearl effect accomplished, the rest of the gold needed some attention.  Gold wasn't exactly the color I was going for... in my mind I wanted a brass feel to it and slightly aged.

This was incredibly easy to pull off and, given all the details in the miniature itself, a wash (shade) would do most of the work for me.  I used ''Agrax Earthshade' from the Citadel line of paints giving it a good coat.  Afterwards I lightly drybrushed some 'Golden Griffen' -- a dry compound from the Citadel line.  Between the shading and drybrushing, the majority of the work on the model was complete.

Eyes were done with a base of 'Mephiston Red' and a layer of 'Evil Sunz Scarlet'.  and the rock bases were done simply with a base of 'Mechanicus Standard Grey', layered with 'Eshin Grey', shaded with the 'Nuln Oil' wash, and finally highlighted with a drybrush treatment of 'Longbeard Grey'.  Some 'Bloodletter' glaze was applied to the eyes as a final touch.