Value of the Haunted Highlands

When I arrived from work today, I was surprised and ultimately delighted to find a package waiting for me.  Upon looking at the box, I was actually a bit confused.  The box hailed from the US from Asendia which is based in Illinois.  It was a good sized box and was clearly addressed to me so, I open it up.  Within it I find a whole bunch of stuff.  The physical components of the Haunted Highlands kickstarter I backed the previous year had finally come in.  Asendia, as it turns out, is a third-party company and I suppose it makes sense for a smaller outfit like Troll Lord Games to use the services of a company such as this for the mailing out of parcels.  The packing seems a bit 'sub-par' but the box arrived in one piece and I only have one little issue to gripe about.  But more on that later.

The contents of the package and level that I backed at was at the $99 level which contained a fair bit of stuff and bonuses. 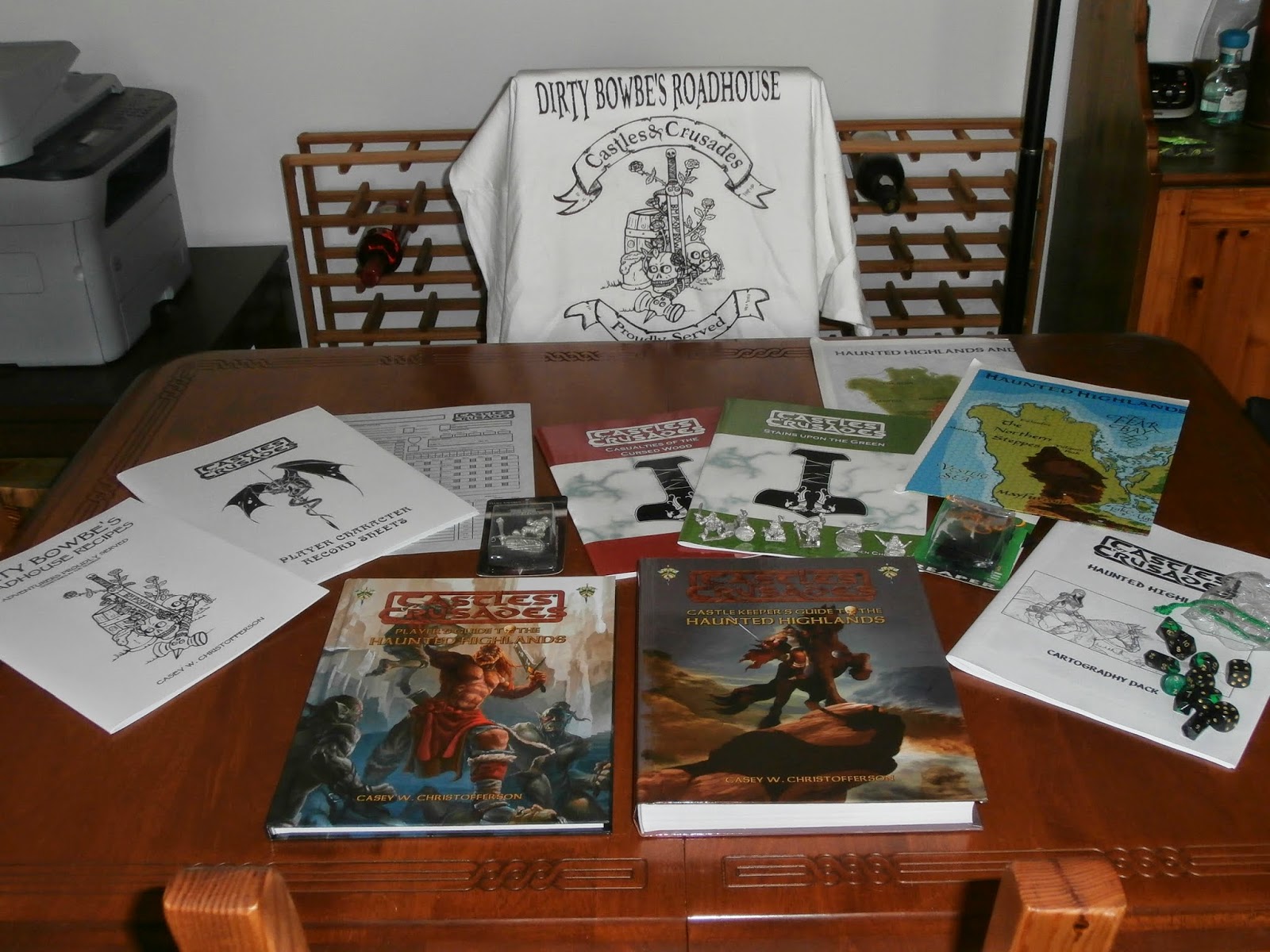 At the core it of, it included a digital and print copy of the Return to the Haunted Highlands book and companion Haunted Highlands Players Guide plus the world map.  It also included a T-Shirt and Cook Book, a map pack, a set of Deluxe C&C Character Sheets, and some dice.  For $99, you need more for your dollar and the stretch goals is what ultimately gave you more.  You can read about the reviews I gave for both books HERE and HERE. 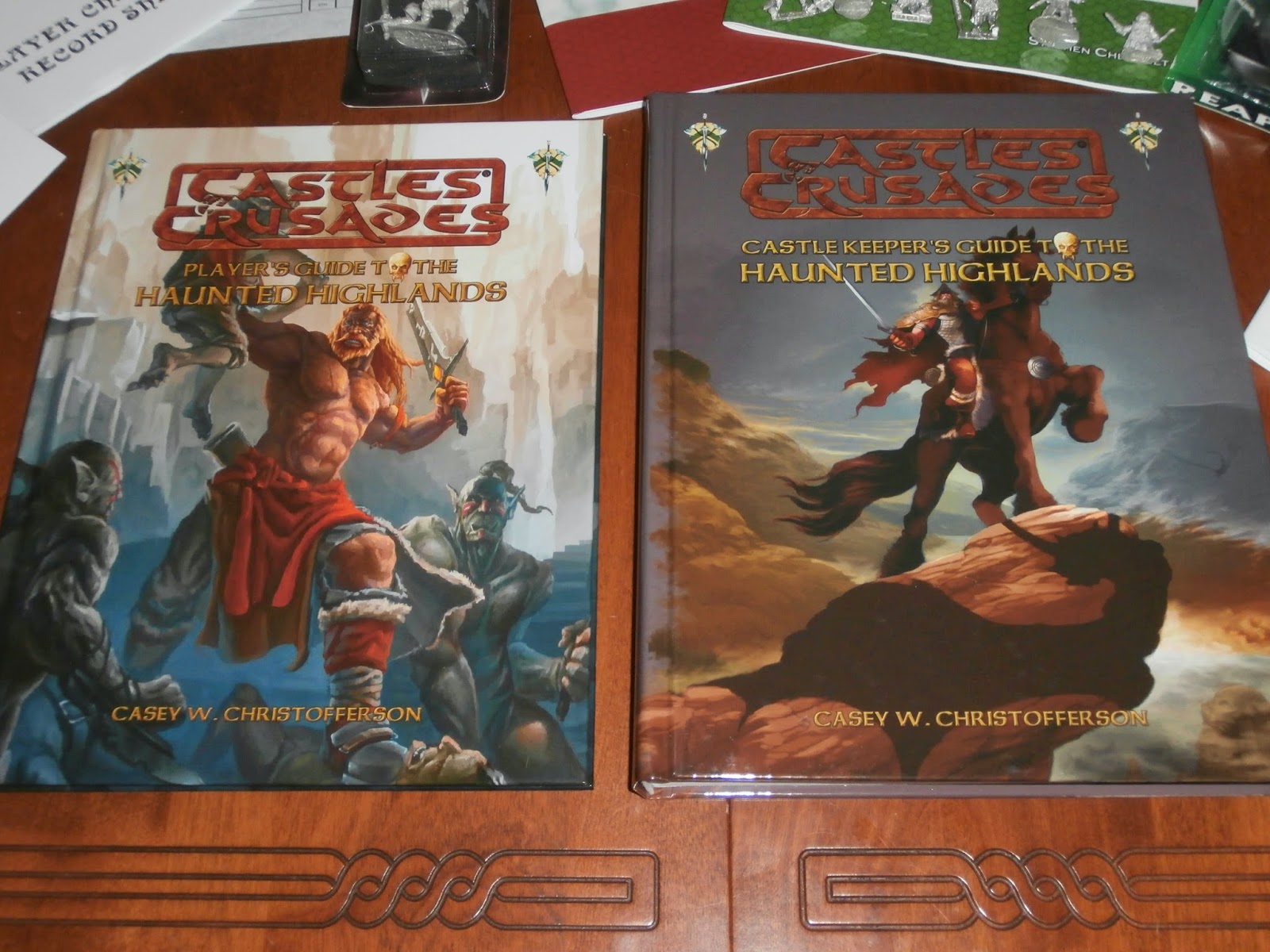 Stretch goals expanded the contents of the main book from a couple hundred pages to twice the size.  The Player's Guide was also expanded and ended up being 112 pages and both books are hardcover.  Along with the expanded content, those who backed a minimum of $59 (which got you both books and the map), a couple of adventure modules exclusive to the Kickstarter were available.  There was also an additional map done by Darlene, the same TSR artist responsible for the classic Greyhawk map that a lot of people love so much. 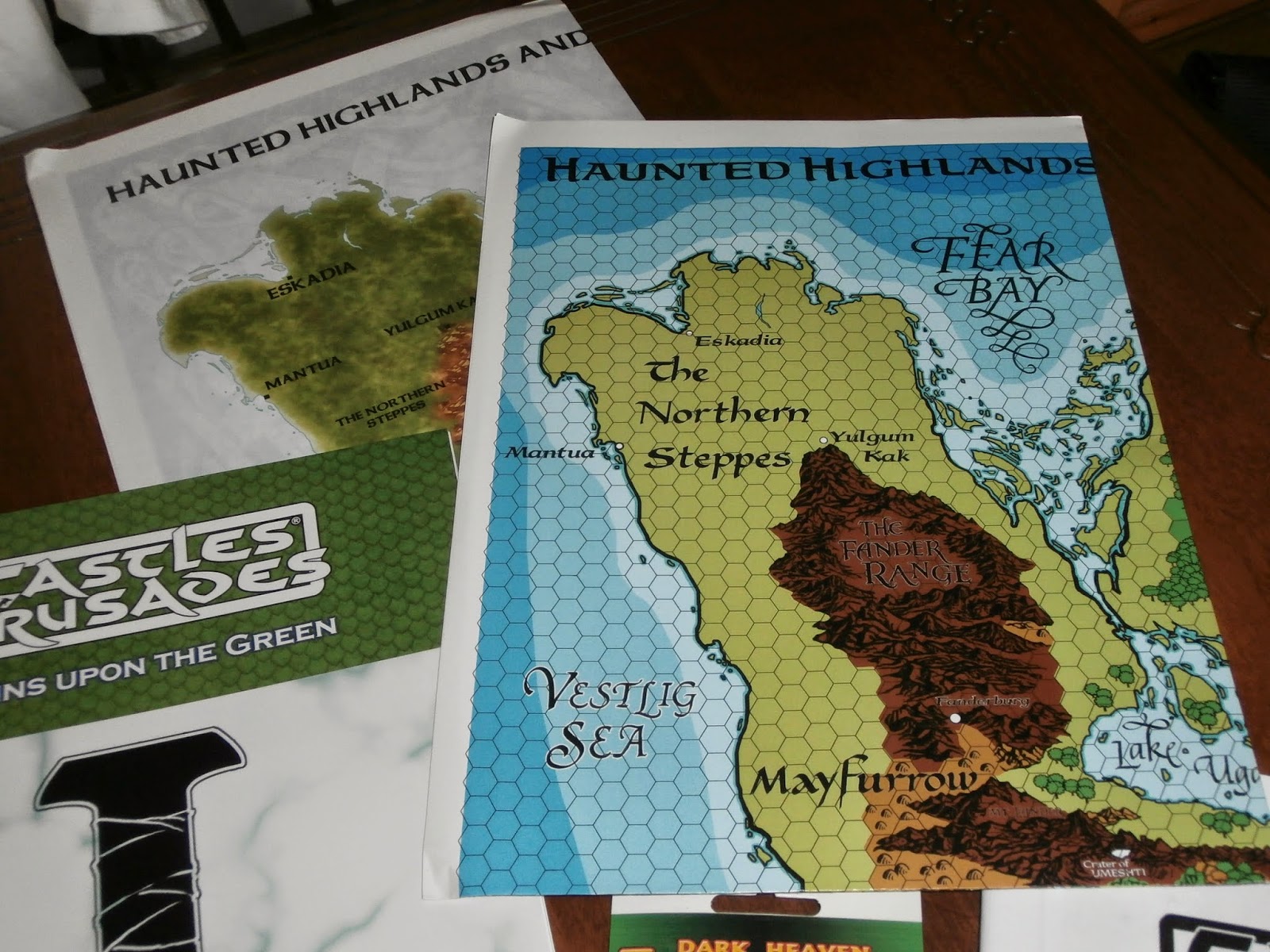 So, at the $59 level, you're getting some decent value.  The books themselves have a combined MSRP of $60 so if you figure 2 extra modules (I'll go with what I have seen), an extra map, it's not too bad.  If the modules were made available for sale, they'd probably be around $6 apiece.  The $75 dollar level get you a T-Shirt and Cook Book (with an MSRP of $6) on top of what you got at the lower level.  However, the $99 level has the distinct advantage of including the character sheets, the dice, and a total of seven miniatures.  Six of the miniatures are from Reaper's Dark Heaven Legends line of miniatures which individually carry prices between $5 and $7 each.  The seventh was a commissioned piece for the Kickstarter by DarkSword Miniatures whose models start at $10.  You easily have $40 - $50 worth of miniatures in at this level on top of the other incidentals such as the premium characters sheets, dice, and the separate map pack. 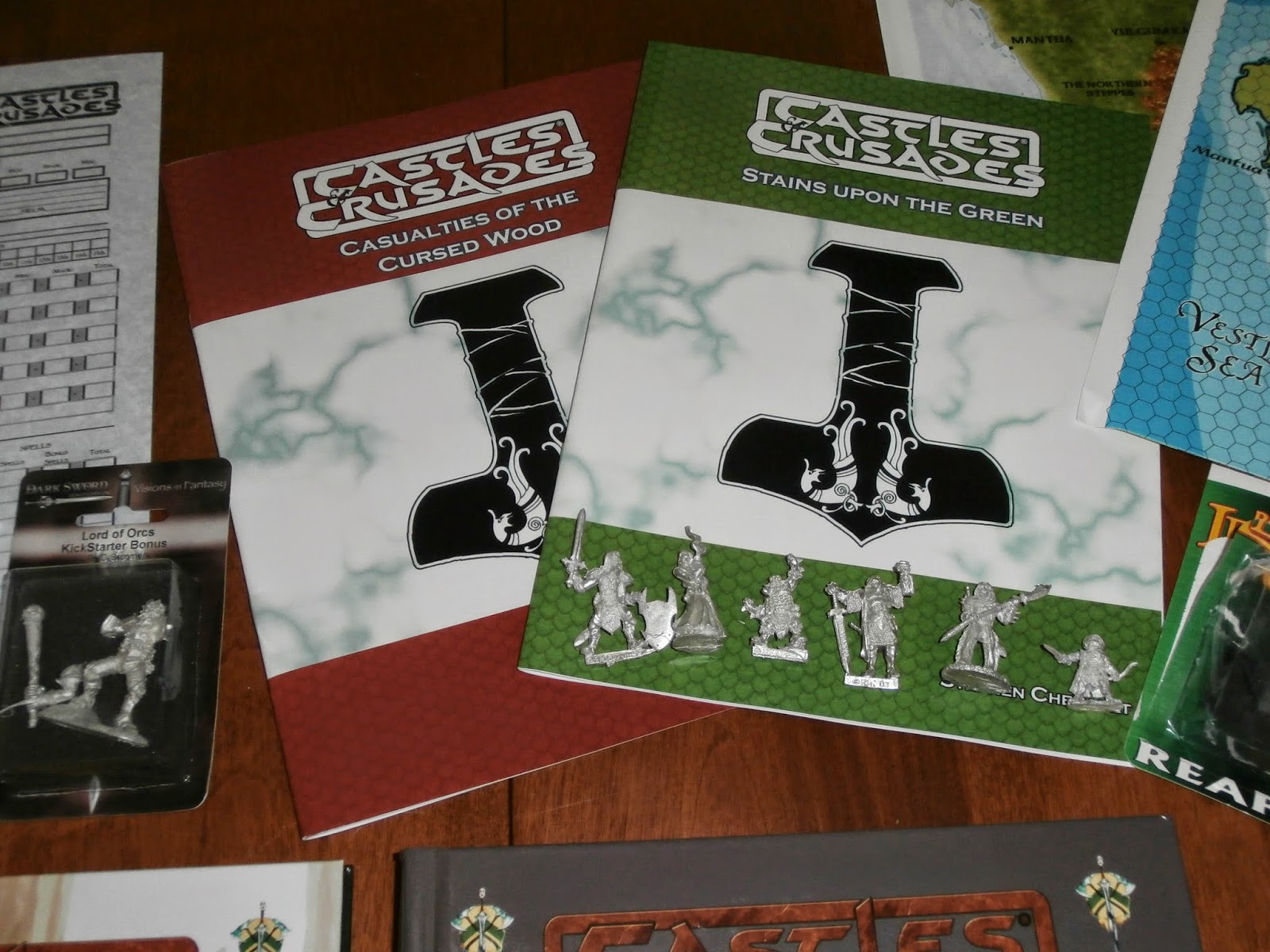 Conservatively, the $99 level probably gets you close to $140 worth of gaming goodness which isn't too shabby all things considered.  However, if it wasn't for the miniatures, I would have been hard pressed to justify an expenditure over the $59 level.  It's the miniatures which quickly convinced me to commit the additional $40 combined with all the stuff I was getting in between. 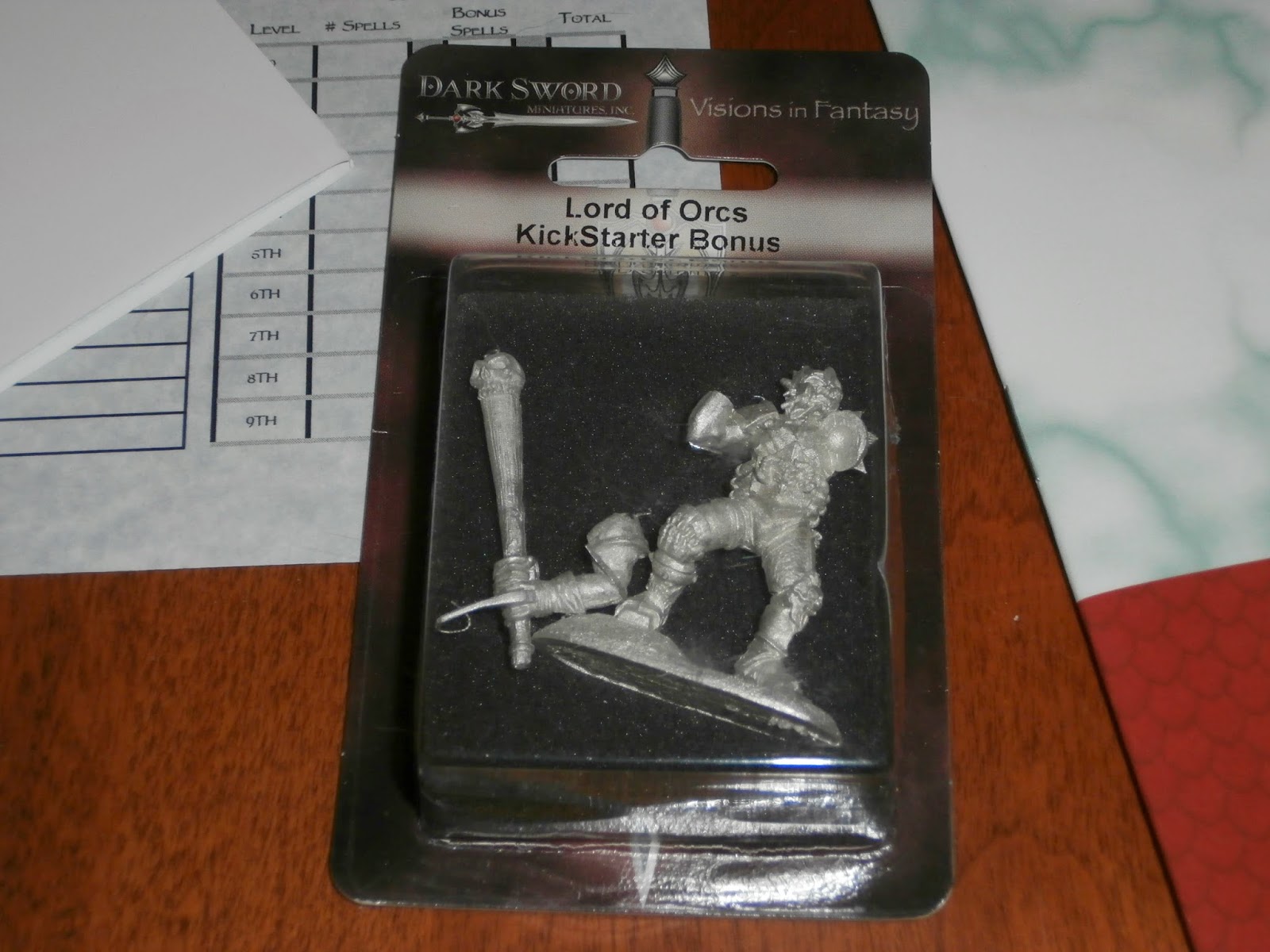 My only gripe (as I mentioned before) was how some of the stuff was packaged.  The two maps are were slightly damaged (creased along a couple of sides and corners) in transport.  The maps, when folded in four, still measure 9 x 12 inches and they were put together in one of the books.  The book was obviously smaller which meant the sides of the maps stuck out and when the books shifted in the box, there was little to prevent the damage it received.  Ironically, if they put it at the very bottom of the box and laid it flat, it probably would have OK thought that is a far from ideal solution.  The box was clearly bigger than the contents and, it seems to me that a small cardboard tube placed in the box would have done MUCH more to protect the contents of the maps. 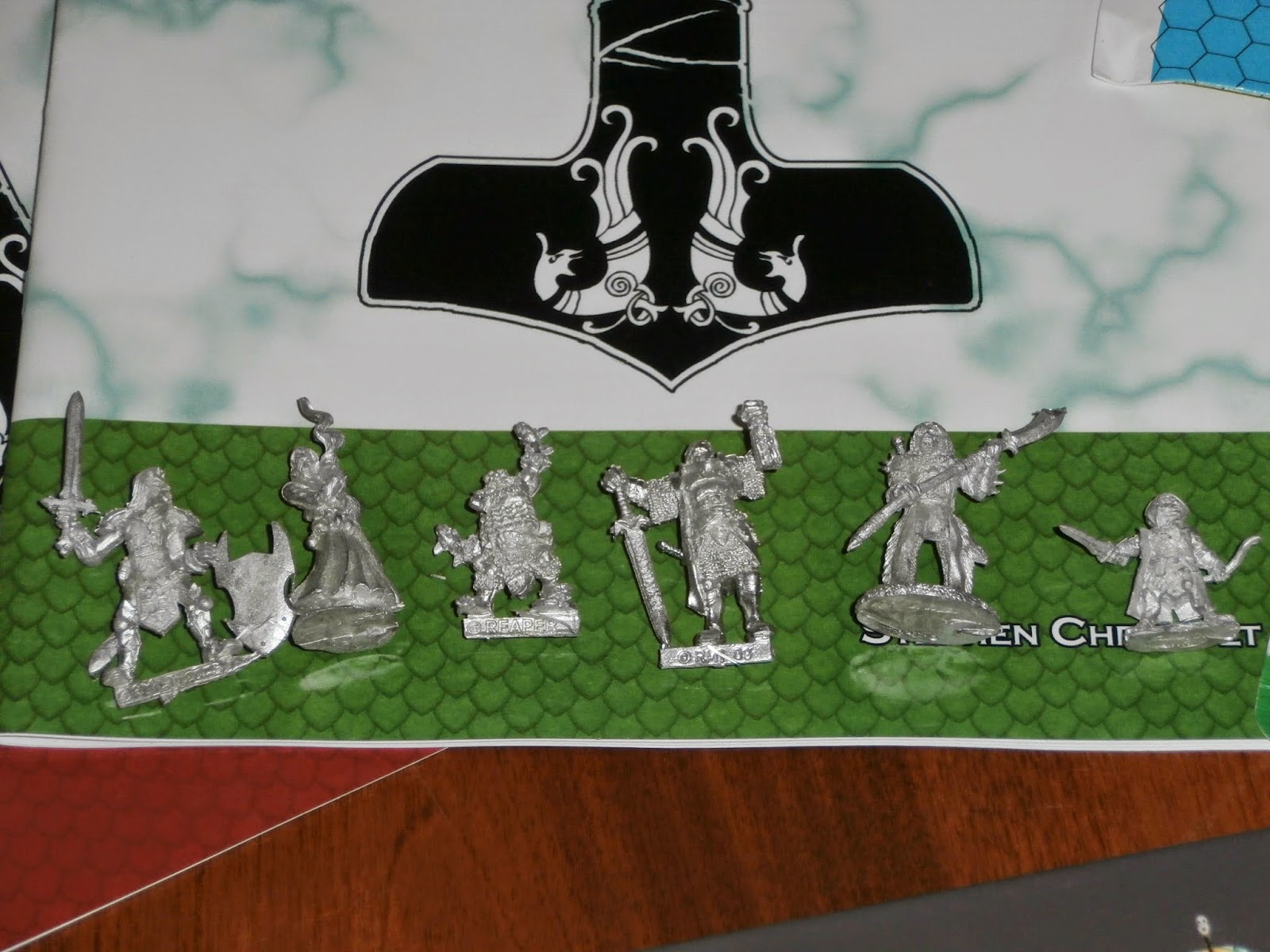 I am however satisfied with my investment -- even after I factor in the additional shipping I had to pay to get it here to Montreal, Canada.  Honestly, I haven't had a chance to game in a couple of months now and, especially after watching the latest Game of Thrones episode ('The Watchers on the Wall'), I am itching to get to running a game again and, it is quite possible that the Highlands will be where I will head to next!