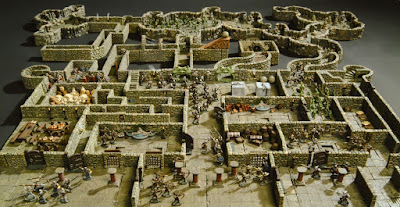 About 30 years ago, I was introduced to pen and paper RPGs and like many, I started with an older version of D&D.  At the time this was AD&D with a healthy does of classic D&D (the BECMI sets).  We also didn't use any miniatures.  Third Edition changed all of that and miniature use become a necessity but I need to be clear here, I never had a problem with the miniatures themselves, only the new ruleset which mandated them.  I moved to Castles & Crusades to get away from those rules but found myself keeping the miniatures.

They are great for new players and they are fun to use and easier to make sure everyone at the gaming table is on the same page when looking at the dynamics of combat between the characters and their opponents.  But, with the love of these miniatures -- be it the collecting, painting, and actual play use, the more I became enamored with them as well as the idea of dungeon terrain for the miniatures.  Drawing on a Chessex map with water-soluable markers works really well but there is nothing like seeing a dungeon 'come to life' and ever since I started looking at miniatures, I've been seeing amazing terrain to go along with it.

And so the quest began!

Dwarven Forge was easily the first I heard about when looking at 3D Modular Dungeons and, as nice as it was, way too expensive.  A couple of years ago, the introduced a new line via Kickstarter called 'Game Tiles'.  It was a hit and a project I had almost backed; my own funds were considerably restricted back then and the shipping was essentially unreasonable.  Upon reflection, this new material which promised to be lighter, stronger, and less expensive was still quite expensive for what you were actually getting.  However, they are a recognized brand and since their release I have found myself looking at their offerings while hoping to find something comparable and cheaper. 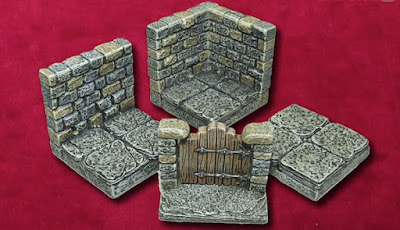 Enter Dungeonstone.  Dungeonstone is, by comparison much less expensive and made of some sort of composite material.  At first, I thought Dungeonstone could be the solution to my 'dungeon-esque 3D cravings'.  Unfortunately, they too are based in the US and shipping is just not feasible if you live in Canada or abroad.  To be fair, they are willing to ship but looking at someone's review of them who also happened to live in the Great White North, shipping was done via Fed Ex and cost them $100 to ship less than $200 of material  Crazy even if the stuff is quite nice.  They are durable though not as durable as the new Dwarven Forge material which they dubbed 'dwavenite'. 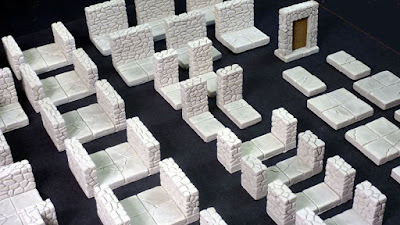 Since then, I have seen a couple of others and one looked a bit promising like the one Stones Dungeon Tiles Kickstarter.  This was less 3D as it consisted of some flooring with no walls so to speak.  It was nifty but it wasn't quite what I was looking for.  The cost didn't interest me much either though some of their add-ons like furnishings did.  Besides, a few years back, I had a modular dungeon game that included plastic and magnetic tiles which I could use for that exact same purpose and re-investing in a concept that I already had didn't make sense.  Besides, I wanted the look of a dungeon and not flooring.

Dungeonstone still seemed to be the most attractive option despite shipping but I couldn't bring myself to pull the trigger.  I started looking at the Hirst Arts molds.  If I couldn't find an affordable modular dungeon solution, I could just make my own.  They have many molds to choose from and, while slightly costly per mold, the simple fact is that you can effectively make as much as you want makes it infinitely the most affordable solution.  But it's messy and time consuming and there are certain to be problems along the way.  I have hundreds of miniatures I have little time to paint so having to make my dungeon from scratch sounds like I will end up with very little dungeon even if I have the tools to do so.

Despite that, it looked like I was going to start investing in some Hirst molds. 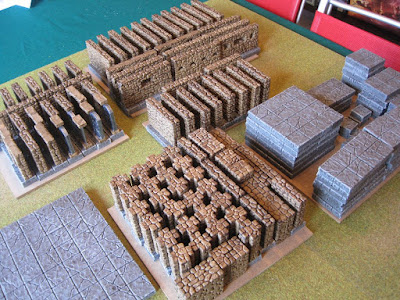 At least, that was the plan until about a couple weeks ago.  Through the grace of social media, I think I have found my solution on Kicktarter, provided that it funds.  The project and look is amazing.  Made entirely of plastic (and thus way lighter than some of those resin-like compounds), the kit take a serious step towards affordability. 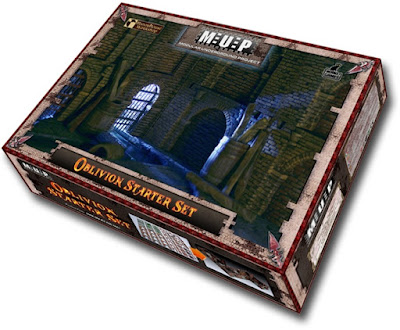 The project is by MAKI Games and is called the 'Modular Underground Project'.  Granted, it isn't the most imaginative of names but, looking at the pictures, who the hell cares.  This looks awesome!  It is definitely more affordable than any of the offerings I've seen thus far and as being much lighter material, the shipping is actually reasonable and affordable in comparison.  A creative design will transform an archway to a wall, doorway, or gate without having just a series of different walls.  Two types of flooring by default ... stone flooring with or without flooring and everything looks nicely sculpted.  MAKI Games is partnered with Manorhouse Workshop who has been making detailed resin terrain for the past two decades. 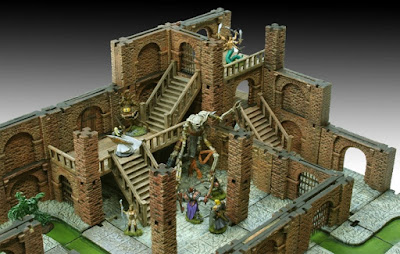 In any event, for the cost of a single starter, you tend to get more than you would from Dwarven Forge and even Dungeon Stone depending on your dungeon style.  However, if you already own either, they are compatible with this new line from MAKI Games.  In other words, why limit yourself?  By that same token, the Hirst stuff would be compatible as well which is just fantastic.

The crowdfunding endeavors have slowed down a bit -- it's hit that middle peak that many projects do and little movement has happened over the past couple of days.  There are things that are coming such as stairs and wooden floors and a few other surprises but all of that depends on future stretch goals.  Being plastic, the machining process is a costly one.  They have the prototypes as can be seen from the pictures and they've been posting additional pictures every few days showcasing the flexibility of the set.  We all know that a lot of people hold back waiting for stretch goals or key components to be released.  That is all fine and good and perhaps even understandable.  However, it seems like it is not getting a much social media attention as this project perhaps deserves.

MAKI Games have already made strides to reduce costs / customs for various international destinations -- even Australia, and they continue to work for other key locations and despite that, shipping is still reasonable (a chart of approximate costs is included on the campaign page).  Shipping to be charged well after the end of the campaign as well as they continue to work towards the most efficient cost-effective options to various places like Canada and abroad. 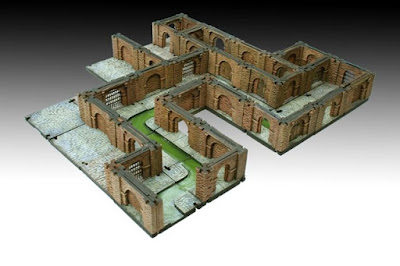 This isn't their first campaign and they have learned from their last Kickstarter experience.  They have delivered, and while there were hiccups, they aren't leaving a ton of backers in the lurch and launching other campaigns.  A few of us have been burned by these Crowdfunding efforts so we are perhaps all a bit more conservative.  However, looking at how they are communicating, and how realistic they are being, I have no doubt that this project is a very minimal risk compared to others we have backed.  I say minimal only because NO Kickstarter project come at NO risk for the backer.  Some people look at the time frame to delivery which is, basically a year.  I welcome this.  They aren't like most Kickstarter, promising delivery in 4 months only to have you wait and wonder for an entire year.  Frankly, this is all good.

If you have dungeon terrain from stuff I've already mentioned, maybe just a kit or two (the example above is with two base kits without stretch goals) will be all that you want.  A single kit that is eligible for stretch goals is $59 USD.  If the Modular Underground Project is something that might interest you, I highly encourage you to visit their Kickstarter page and pledge now!

You can find it HERE.