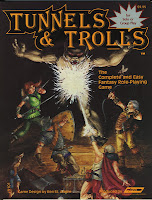 Well, I'm far overdue for my Weekend R&R series and given the past posts and very old school subject matter of the last two I did (Advanced Fighting Fantasy and Dragon Warriors), I thought I'd talk a bit about Tunnels & Trolls.  Of course, it's no small coincidence that the idea did come about by seeing the Kickstarter coming to a close in the next few days for the new deluxe edition of the game (check it out HERE).  The very first time I came across Tunnels & Trolls was the old PC computer game released in 1990 while I was living in Europe.  The cover art was simply awesome and I wanted it so very much.  However, I was only 15 at the time and money was a bit harder to come by -- especially if what little money one had already was largely devoted to buying various D&D and AD&D books to use for the games I was actively engaged in. 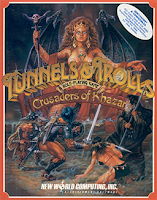 I never forgot that cover art for the computer game and, thanks to that day, I realized that Tunnels & Trolls was it's own game and one I did need to look into a bit more.  As luck would have it, I didn't have much luck at that a few years later.  I just didn't know anyone who played let alone even had a copy of the rulebook but, thanks to various BBS's and the widespread internet that came afterwards, the consensus was largely the same: it was an inferior D&D ripoff.

Still, this didn't deter me.

A lot has changed in the past decade, and the way we shop for our games, the pervasiveness of digital content in certain cases, have really made obscure titles -- games, books, and other things, a lot more accessible.  Online communities which have began forming since as the capabilities to connect online continue to forge connections and friendships as well as a great sharing of ideas.  The same goes for buying / selling / and trading.

I consider myself fortunate enough to have traded for a copy of the 5th Edition Tunnels & Trolls 'Black Box' a few years back which served to complement the Free RPG Day release I got back in 2007.  Yes... 2007.  It took over 15 years for me to come to the end of my quest but that black box was pretty slick.  Since then, I have gotten a shiny copy of the 5.5 Edition of the rulebook which I keep in the box along with the gently used 5th Edition book that came in the set.

The contents of the box was the book, Buffalo Castle, Dungeon of the Bear, some cardstock handouts like the Survival Kit and some pre-gens, dice and the special pencil.

The system itself is delightfully simple yet functional -- as any old school approach should be and the creator of the game, Ken St. Andre stated on many occasion that he created it in response to what he thought were unnecessary levels of complexities in the original Dungeons & Dragons game for him and his friends.  If D&D is recognized as being the first RPG, the T&T is the second with the earliest version having been published in 1975.  It was only natural for comparisons to be made between them and, with the light hearted and, at times, silly apporach T&T took, so-called "serious gamers" didn't give the system due credit.  With the solitary adventures produced for T&T, it likely had as much of an influence as D&D did for the various Fighting Fantasy books that began to appear in the early 80's.

Of course, today such an argument about the merits of T&T when compared to D&D is largely invalid.  With the OGL and the creation of open game content and the OSR movement that followed, we have many games to chose from that all derive from D&D and D&D type games.

The bottom line is that Tunnels & Trolls has stood on its own for almost 40 years now (I hope for something special in 2015) and it deserves a second look if you haven't done so already.  The whimsical nature of the game helps it stand apart and, frankly, the simplicity keeps that game accessible for younger players or experienced players who are more interested in storytelling and roleplaying.

The system itself will be familiar enough with a total of 6 attributes you roll for (Strength, IQ, Luck, Constitution, Dexterity, and Charisma) with aspects of these attributes having an impact on the game.  To help illustrate the simplicity of the game, here is how Combat works:

Fighting involves rolling a set of dice (based on the weapon and ability) measured against those of an opponent with the difference remaining going to the 'loser' of the round to allocate damage which is offset by armor.  Any damage getting through results in a loss of Constitution which are also your health points.  Groups add the totals for each side and do the same.  That's it.  Very simple.

If curious, I recommend popping over to RPGNow and grab the free Quickstart which was originally put together for the first FreeRPG Day back in 2007 (over HERE). Looking quickly, there is also the PDF of the 4th edition of the Rulebook for only $4.00 now available which I think I will grab for myself later.  If you already know what I'm talking about but haven't heard about the kickstarter, check it out... there are some nice things there even if you aren't interested in the new rulebook.