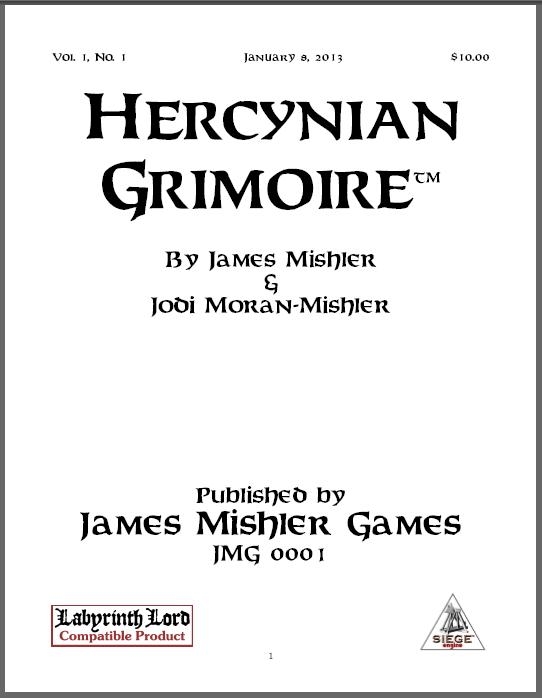 At the beginning of February, James Mishler kicked off a series of little contests to promote the new material he was putting out under 'James Mishher Games'.  I have always been a fan of James' work and since I hadn't yet had the opportunity to pick up the new release, I entered one of these contests.  The price was a copy of the first issue of the Hercynian Grimoire and, I subsequently won.  I was very happy to get the news and, was even more surprised when I saw it contained over 40 pages of material.  I thanked James and promised a review in the weeks that would follow.

Before that could happen, my computer had the meltdown.  This left me without a valuable tool I had taken for granted since I went on without a computer for close to two months.  When I got back online, certain things got prioritized over others and the planned review of the Hercynian Grimoire was one of the things that got put aside.  This is something I regret simply because the Hercynian Grimoire is such a neat product and I'm not sure it got the attention it deserved.

Similarly, this was something I saw with the older AGP products ... a line with great potential but also troubled and struck with constant misfortune.  Adventure Games Publishing faced a variety of issues and challenges and, understandably, shut down with James essentially burnt out by the whole affair.

For those of you familiar with his older material and AGP, some of you may wonder what makes 'James Mishler Games' different from 'Adventure Games Publishing' and those products. A valid question and, in short, the quality and substance from Mishler has not diminished.  You have a ton of material which can be dropped in any campaign and the material is intelligibly written and organized.  I've always enjoyed reading Misher's work and I'm always delighted to see more of it.  The Wilderlands, or rather his version of it, is something that has been left behind but, starting with the first issue of the Hercynian Grimoire, he begins offering glimpses of a new campaign setting (more on that later).

While I like the Wilderlands and some people absolutely adore the third edition incarnation by Necromancer Games (where Mishler was a primary author), others may have found it too 'niche' to reach a broader audience.  I tend to disagree with that sentiment but will put forth the idea that the setting itself may be daunting to those who are new to it.  Before AGP, I knew next to nothing about the Wilderlands and Judge's Guild but I jumped in anyway not being too sure where to start.  There can be no denying that there's a lot of history when you look at Judge's Guild and, by retrospect, someone who came to view the Forgotten Realms setting now with everything that was released for it, be it novels and gaming modules, supplements, and accessories who had no prior knowledge may find that equally daunting or confusing.

The AGP material was also primarily written for Castles & Crusades, some may have found the decision to do so equally limiting.  As someone who has used C&C as their preferred gaming system for the past seven years or so, I don't see the system as an obstacle but have seen a trend of lower than expected sales numbers for some third party products.  JMG products now provide dual-stats for Castles & Crusades as well as Labyrinth Lord for the material presented.  This means that, even if you don't play either system but use something else derived from the same family of gaming system (that is to say D&D derived), there should not be any issues with adapting the material included to your system of preference.

Essentially, the new material is great content with plenty of substance that is suited for a fantasy themed game designed for both C&C and LL.

What you won't really see though is a lot of art.  In fact the first issue of the Hercynian Grimore contains *no* art.  I'm afraid I can't count the art which are adverts in the last couple of pages of the PDF which go to promote Castles & Crusades, older AGP material, or material published by Goblinoid Games.  Reasons are simple: JMG is keeping costs low and art is one of the most expensive costs when putting out a gaming product.  The flip side to that is you are getting over 40 pages of written content!  So, having doing the (almost) mandatory comparison between AGP and the newer JMG products, what does this first issue and first product from JMG actually contain?

A lot of odds and ends.  The issue is split up in four sections -- the names of three of which will be instantly recognizable for those familiar with the roots of the hobby.  They are 'Men & Magic', 'Monsters & Treasure', and 'Underworld & Wilderness'.  The fourth section is called 'Gods & Demigods'.  The introduction is simple enough and provides and idea of what is to come and what one should expect from JMG in the future.  First off that the Hercynian Grimoire is going to be an irregular publication and that the JMG is really the efforts of two people: James and his wife, Jodi Moran-Mishler.  The 'Olden Lands', the back drop for much of the material, is also described in the introduction as a:


Meaning that all the material could be adapted with ease to any existing campaign.

The Men & Magic section has an articles on Gnolls including having a Gnoll as a playable character race, Gnoles (offspring of Humans and Gnolls), a random table for 'Ferocious Fighters', and a couple articles with new spells.  What I found interesting were the tables in this section and those that followed.  The 'Ferocious Fighters' table are rolled with d66.  No... that's not a typo.  You roll two d6 but instead of adding the results together, the each die represents a different digit much like how you roll a percentile result using two d10.  In this case, there are 36 possible results in this table.  However, as you can see, it's a hodge-podge of material which can easily be adapted to a game.

The Monsters & Treasure section that follows offers articles similar to the section prior and offers, 'D66 Fairies and Nymphs', a 'Gnoll Tribe Generator', 'D666 Demonic and Devilish Traits', and a section containing magical items.  This section also contains a whole bunch of new monsters for the game under 'Monstrous Menagerie' making this second section the largest for this particular publication.  My immediate favorite was the D666 Demonic and Devilish Traits because it's always nice to make your evil outsiders distinct and unique in a manner that your players will remember.  As far as critters are concerned, you can never have too many of the buggers to throw at your players.  The Gnoll Tribe Generator was also a very nice touch and serves to connect previous material in the issue to make the publication a bit more coherent.

The second-to-last section, Underworld & Wilderness, gives another table, 'D66 Underworld Oddities' which is the perfect little tool to spice up a dungeon, and two setting specific articles which are effectively previews of the Olden Lands Campaign Setting.  These are well detailed and could be mined for use in other campaigns if one wanted to but may be the type of article skimmed over due to lack of context.  Then again, it could lead to looking at the other Olden Lands material which is probably the whole point of the preview to begin with.

Gods & Demi-Gods on the other hand is a bit more interesting even if one is not particularly sure of investing into a new campaign setting.  While is is also previewing material for the Olden Land, the 'Blood God' is a concept that could readily be adapted and used in many different settings.  The inspiration is certainly there if one takes the time to read the final article.

All in all, the first issue of the 'Hercynian Grimore' is a great collection of material.  It is strictly available as PDF and part of the reason for that are the costs and time involved in getting something closer to print, even if it is just POD.  While I certainly have a preference for physical copies for the material I intend to read or use, in the past couple of years, I have increasingly found myself preferring a digital option.  However, given the nature of this particular publication, I have to say that PDF suits it quite nicely.  If I want something specific, I can just print it if I need it but more often than not, I can just call it up on my screen when I'm seeking some inspiration and working on something like an adventure or even call it up on my tablet at the gaming table.  As far as price is concerned, I didn't buy my copy (it was a contest prize) but I noticed the cover price indication $10.  Honestly, I think that a bit high but when I looked it up on RPGNow, the regular price for it was $8.  At $8 dollars, I think it's certainly worth the price given the amount of content you are getting here.  Other more recent products for the Olden Lands are priced lower than that though the page count is also closer to 20 pages.  These newer publications carry a $3.00 price tag (this is the regular pricing) and end up being a fine bargain.

As irregular as the Hercynian Grimoire is, it's been several months since the first release and I do hope to see a second one soon.  I understand there was a major move for James Mishler which pretty much means the whole company moved.  Moving can be quite time consuming and the recovery of a move and getting back to a routine a lengthy process.  However, from what I've already seen (I've also picked up a series of other products he did up recently), James Mishler Games is off to a good start and the Hercynian Grimoire is worth checking out.

You can buy it HERE.