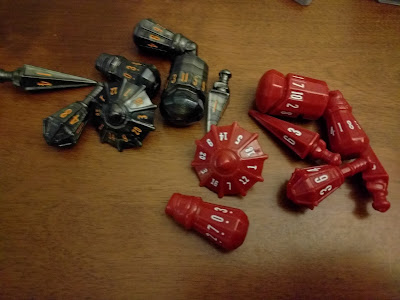 Well, after months of waiting (a bit over a year), the three sets of Warrior Dice that I backed though Kickstarter are now in my hands!  The timing of their arrival also coincided with the launch of a new series of dice.  More on that later...

So... what are my impressions?

I really like them.  Now, having used the Crystal Caste, I'm already accustomed to using polyhedral dice for my gaming that weren't exactly the standard shape.  The d4 and d10's for example are mimic more the structure of a crystal than what some of us may be accustomed to seeing.  In some ways, most of the dice will roll in similar ways. 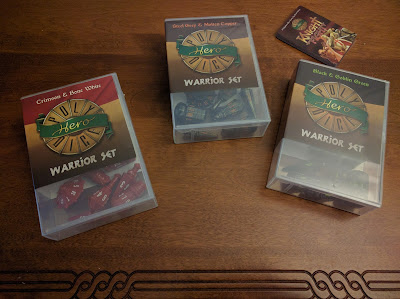 The Warrior Dice are themed by taking their design cues from various pieces of arms and equipment.  The d4 is a dagger, the d6 is a shortsword, and the d8 is a mace matching the damage dice for those same weapons in games like D&D.  The d10's are a pair of gauntlets, the d12 is a helm, and the d20 is a shield.  Honestly the d20 is a bit wonky but is balanced and was one of the reasons why the project took a bit longer to fulfill.  The first sample / model had issues so it got tweaked and altered to correct this problem. 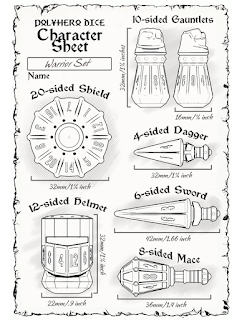 The plastic itself feels a bit different than a lot of the dice I own though.  Each die still has a good weight about it but I suppose it's possible that the handles for the weapons could break in certain special circumstances. To be clear, I'm not talking about standard or heavy use but one were forceful or one of the weapon dice found it's way under the brutal heel of a heavy boot, something could snap.  Of course, I suspect a clean break would also be REALLY easy to fix without affecting how it rolls.

Because of the shape of the dice and nature of the material, the dice are NOT tumbled.  The means you will also be able to find the sprue marks on the dice if you look closely.  However, given how they roll, they will not interfere with the rolling at all.  If it bothers you, they are easy to eliminate as they are on game science dice and miniatures.

When I backed the project back in 2015, I pledged for 3 sets which set me back $64.  Shipping was free so it worked out to $21 and some and some change per set.  2 sets or more also came with a mini card game to use with the dice and each set was shipped in a heavy duty plastic case.  The plastic case itself is great and I'd by happy to buy more of these empty cases. They are great for cards or quite a bit of dice!  Each case has two compartments and each compartment will hold cards -- even if you use sleeve protectors for them.  Needless to say, those who backed the Kickstarter got a better deal. 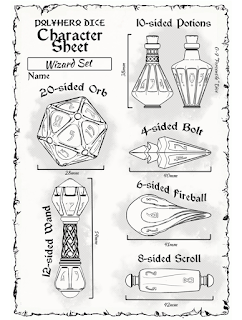 At their regular price, $25 is still a decent price given the case that comes with them.  Shipping from PolyHero Dice is very reasonable as well.  You can find them HERE.


So, now that I have these sets in my possession, I am very comfortable at the idea of backing a couple of Wizard Dice sets through their second Kickstarter that started up today.  Much like the Warrior set, theme is everything and they are look great!  The d4 is a bolt, d6 is a fireball, the d8 is a scroll, the d10's are a pair of potions, the d12 is a wand (rod?), and the d20 is an orb.  As a kickstarter exclusive, there is also a d2 which is a book in this case.  They are also cheaper per set compared to the Warrior set but their is a very small worldwide shipping amount.  They are also NOT doing the heavy duty plastic cases which cuts down on shipping costs.  Three sets would set me back  $48 (after shipping) compared to the $64 I paid for the Warrior set. 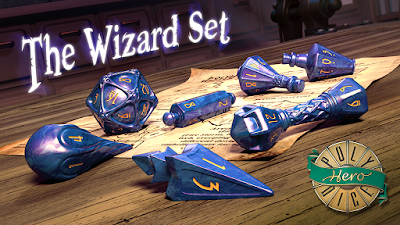 If you missed out on the first Kickstarter and don't want to order directly, they will be offering up sets of the Warrior dice as part of the Pledge Manager phase once the campaign is over but you likely won't save much if anything by doing that.  Otherwise, you may just prefer wizards over warriors and just check out and pledge for this set instead (over HERE).