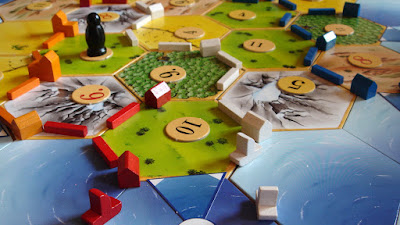 As a kid growing up, I liked playing board games and cards. Up to the age of 12 or 13, most of this sort of gaming was confined to the likes of Monopoly, Stratego, and Risk. Then one X-Mas back in 1989, I received a copy of Axis & Allies and I marveled at the complexity of the game. There were so many different components and what seemed to be a large game board! I loved it and I equally enjoyed Shogun (also a Milton Bradley game) that another one of my friends had.

At that age, I had also started playing D&D. Because of this, Axis & Allies was pulled out 'once in a while' and really, all board games ended up sharing that fate. Things pretty much remained that way for years afterwards. If it wasn't D&D, it was another tabletop RPG.

About 10-15 years ago, I ended up getting roped in to play this game called Settlers of Catan along with few other board games that I had never heard of before. As it turns out, this was the beginning of some sort of board game renaissance! The tipping point for me was a game called 'Antike'. It is sort of a board game equivalent of Civilization were you compete against other ancient cultures for dominance. It is not overly complex but it isn't a game reliant on a 'luck mechanic' (as in dice or cards) either.

On my next trip to Montreal (I had been living a couple hours away at the time), I picked up a copy for myself, along with what looked to be a fun Tile-Based game called Drakon. My actual move to Montreal came less than a year later and once there, I made some new friends. I was introduced to (and acquired) games like Ticket to Ride, Shadows Over Camelot, Citadels, and a few others. Somewhat wisely, I decided to try and avoid games that were too alike in terms of game play and mechanics. Yet somehow, that didn't help much.

I remember a year or so into my new board gaming habit, Fantasy Flight was doing some sort of X-Mas promotion were I could get some games for $5 USD each plus what was almost reasonable shipping charges (BOY have things changed). The Canadian / US exchange rate was also a lot more favorable back then than it is now so it didn't take too long to acquire a bunch of new games in one fell swoop! I also was constantly on the look out for other deals and sales and I picked up quite a few other games that way. With all of that, plus the ever growing expansions for some games, it didn't take long for the cabinet that held my games to start overflowing.

The acquisition of all these games weren't the problem though...Finding the time to play them given everything else I had going on was. We had a couple of friends we routinely played various board games with -- almost on a weekly basis. But they had their own games and between us we had favorites that we kept revisiting. This meant there were some games that we have collectively owned for years and have never played!

I decided on a 3-point course of action: I decided at that point to greatly reduce the the rate at which I acquired games. I decided to try and focus on the ones I already had. And finally, I decided to try and sell some of the ones that I could do with out. Selling these off is harder than it should be because people want to spend as little as possible and because shipping isn't cheap! I did manage to part with a few that I knew wouldn't get played ever again for one reason or another.

For a few years, things were good. I rarely picked up a new board game as I didn't see the need. Sure, I had other things to sink cash into and, despite being a fan of various Kickstarter projects, I backed only TWO small board games in six years! That said, something happened in 2018 and I ended up backing SEVEN board game related projects last year. These have started coming in last Fall. Three of them are BIG ONES too and I need to find places for all these games soon. I also probably need to purge some older un-played or disliked titles -- even if I have to give them away!

I love board games and the social aspects of some of these games. I just don't have the time to play all of them and I don't think I ever will. The friends I mentioned earlier? They've reached the same conclusion. For myself, I think I need to refine the criteria for keeping games in my collection.

This gaming renaissance that we've been experiencing for the past ten years? Maybe those days are numbered as we all become collectively buried by the newest fantastic game. Kickstarter has certainly been a driving force for this too. Crowdfunding has both been a blessing and a curse and while it has allowed for many games to be made that wouldn't have been published otherwise. It also means many games will just come and go as dedicated board gamers just move on from game board to game board.