I got back from my first trip to Gen Con just over a month ago and between recovering from that and the Montreal Comic Con I attended a week and a half ago, I am both poor and impoverished.  You know what?  I wouldn't change a thing. My significant other and I are looking at doing it again next near and, with some of the lessons we both learned, aim to have an even better time next year.

There were a lot of highlights for me and there are MANY reasons why some people go back year after year.  Naturally, the games were fun and the workshops I did were pretty cool.  One of my 'regrets' was booking to much of my time to doing various events and workshops.  Some of these things went into the early evening which, frankly deprived me of some great off-grid gaming.  Lesson One learned -- keep my evenings free.  I also went top heavy on some of the workshops in part because some of the events I wanted to do ended up filling up very quickly when tickets for events opened up.  With over 12,000 events before registration started, I was not fully prepared for all my selections beforehand.   Sure, it sounds obvious, but the problem really stemmed from trying to organizing certain events with the people we were traveling to Gen Con with.  So, Lesson Two learned -- 'reserve stuff' in advance and focus on KEY events only.  Those you don't get in on, well tough ... having open spaces in your schedule is not a problem as you can always get 'generic tickets' to do other things even up to and during the convention itself. 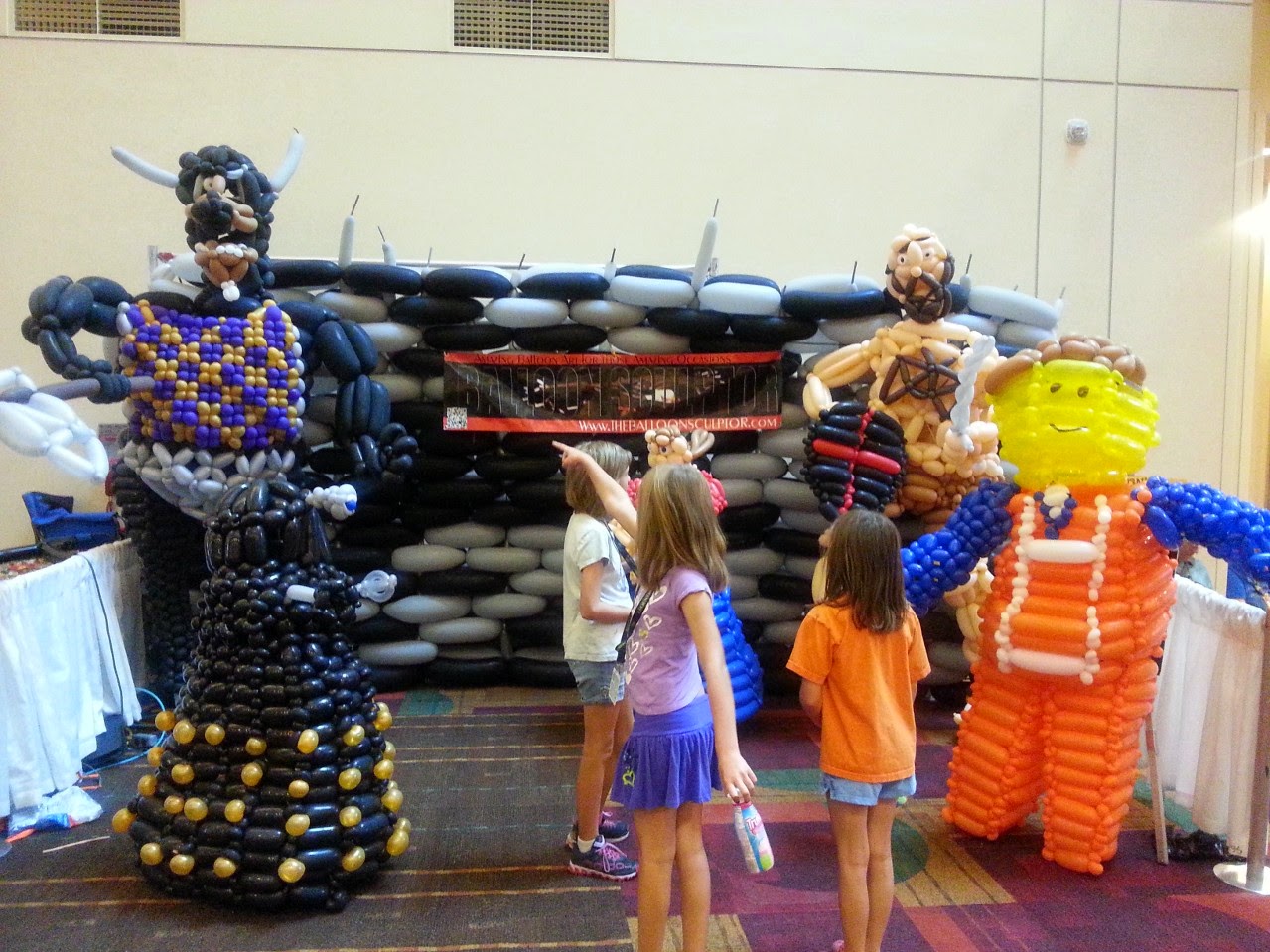 Frankly, the biggest thing for me was meeting up with some people that I've had corresponded online and perhaps spoken on the phone a few times over the past few years.  Meeting up with some friends is, for me, the best thing about this thing and I have to say that the venue and city was fantastic.  Very friendly and open to having thousands of people descend upon their fair city. 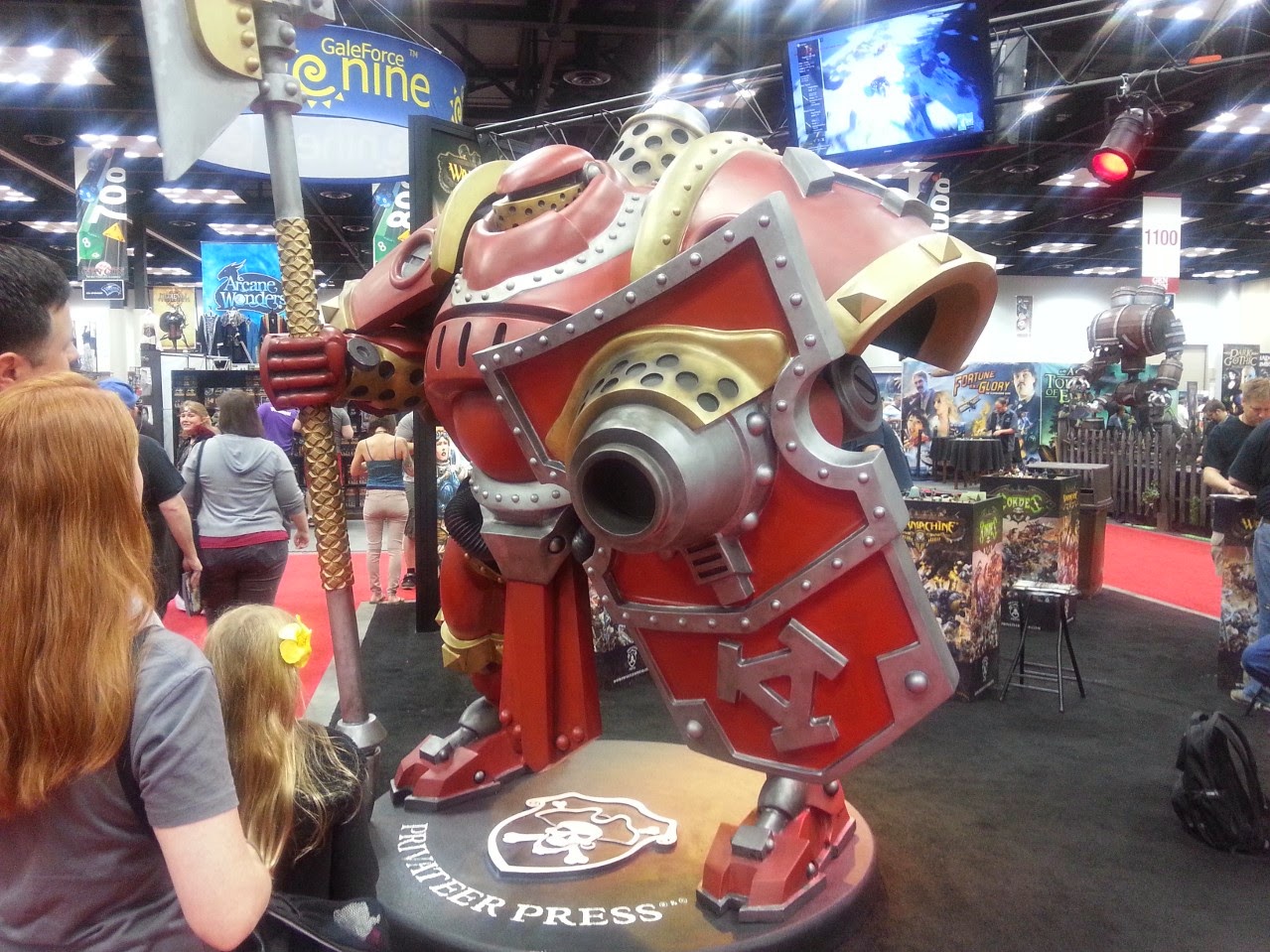 So, what exactly did I do down there?  There were certainly a lot of things but some highlights (in no particular order) were:

Playing through True Dungeon.  I had fun with that and my friends and I did the 'puzzle oriented' one.  I think the combat oriented one might have been more fun but it was cool nonetheless.  It wasn't a perfect experience -- you don't always get to pick who your adventuring companions so unless you have enough friends who have bought tickets to go through the event, you will be meeting some new folks.  My only criticism would be the cost of the event itself.  It seems a bit steep but you do get to keep a bunch of tokens which could be used at your gaming table. 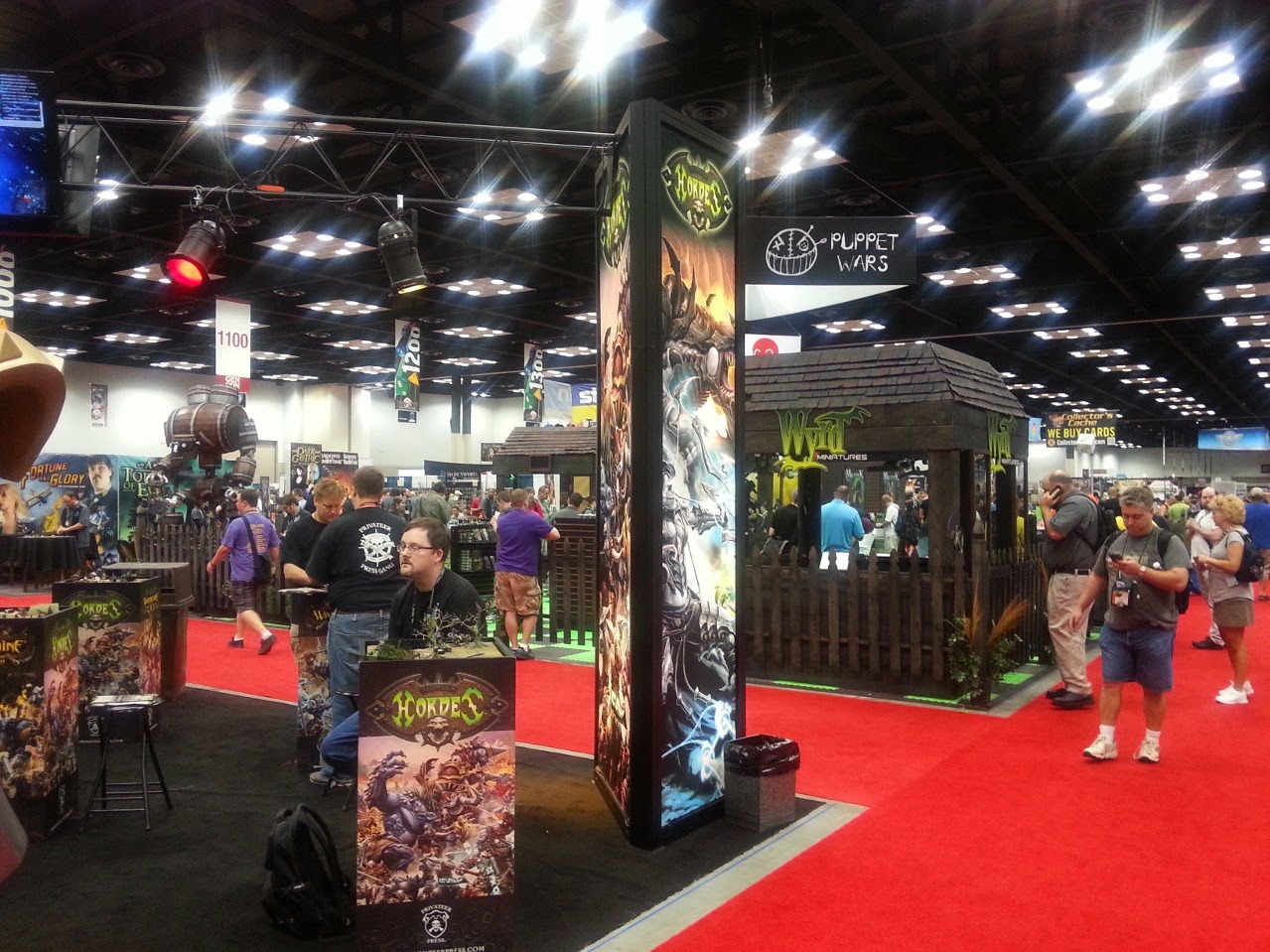 Workshops.  As mentioned, I did a few.  I did a Scalemail bag (mostly finished), a chainmail workshop (not even close to being done), some leather bracers, and I participated in a foam weapon workshop to fill up some time.  I liked most of the workshops but the I figured the foam weapon would be something more than just a 'foam club'.  The Scalemail just needs to be finished up but the other bit of chainmail I was doing will be for a larger project.  The wife also did the leather item and foam weapon workshop with me and did some chainmail in a different workshop for a stuffed monkey.  As it turns out, she REALLY likes doing chainmail and I may get her some more for her to do.  Or maybe I'll get here to finish up my chain.  ;) 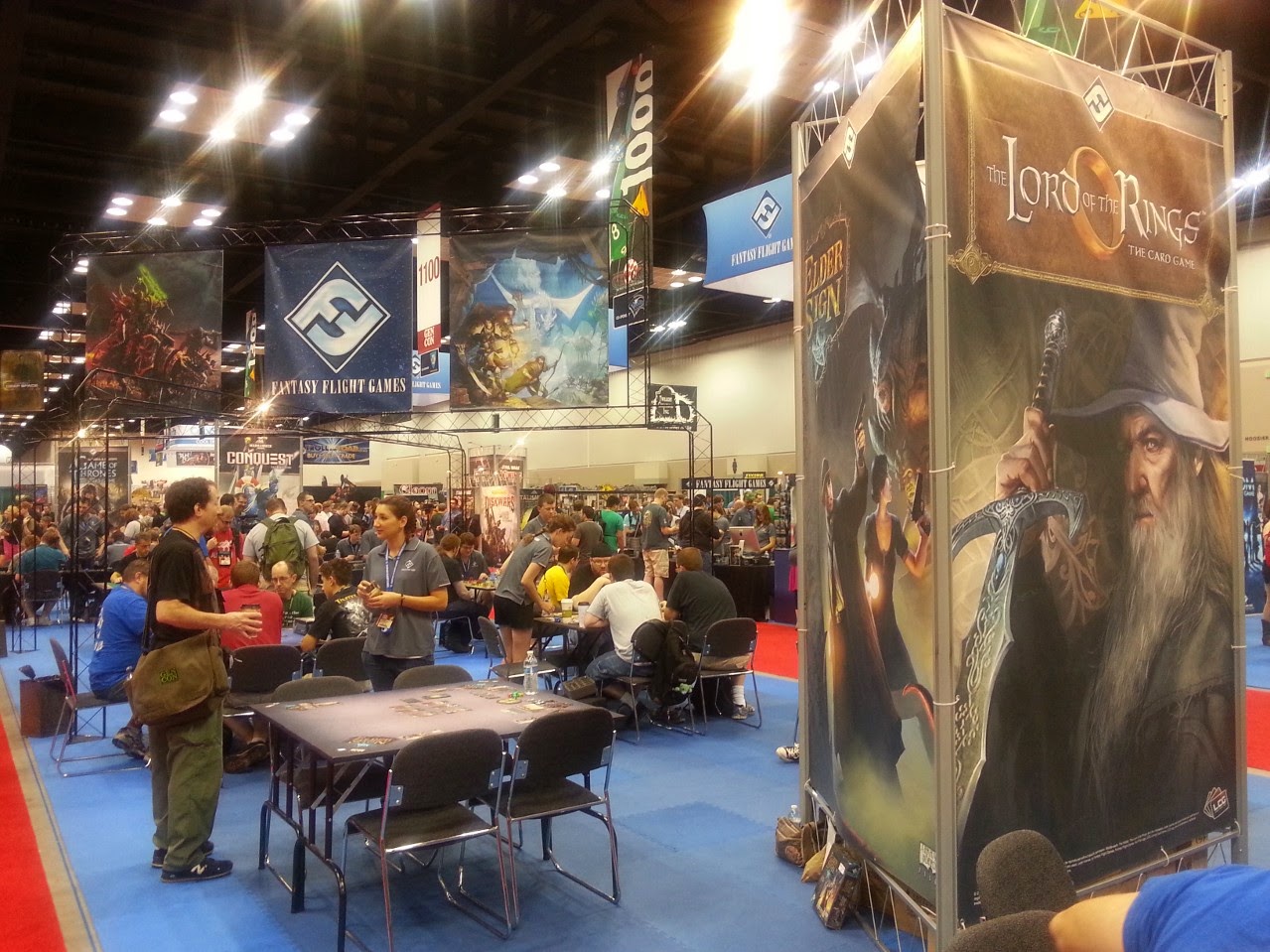 The Meatgrinder.  In previous years, this was the Tower of Gygax and I had a BLAST.  I ended up playing three characters during the session and my first character ended up with the distinction of being the 'quickest kill'.  When I came in, the game had already started and I was given a Half-Orc barbarian-like Fighter.  Can't remember the level but it was probably between 2nd and 4th..  At any rate, I came in... move towards an offensive Kobold and yelled at it like a good barbarian should.  That caught it's attention and the attention of another 13 or so of his friends.  Then I realized all of them had bows.  Then I realized I had no armor on.  11 of 14 hit.  The character effectively lasted a single round.  One word: FANTASTIC!  My subsequent characters were thieves.  They did a lot better.  ;) 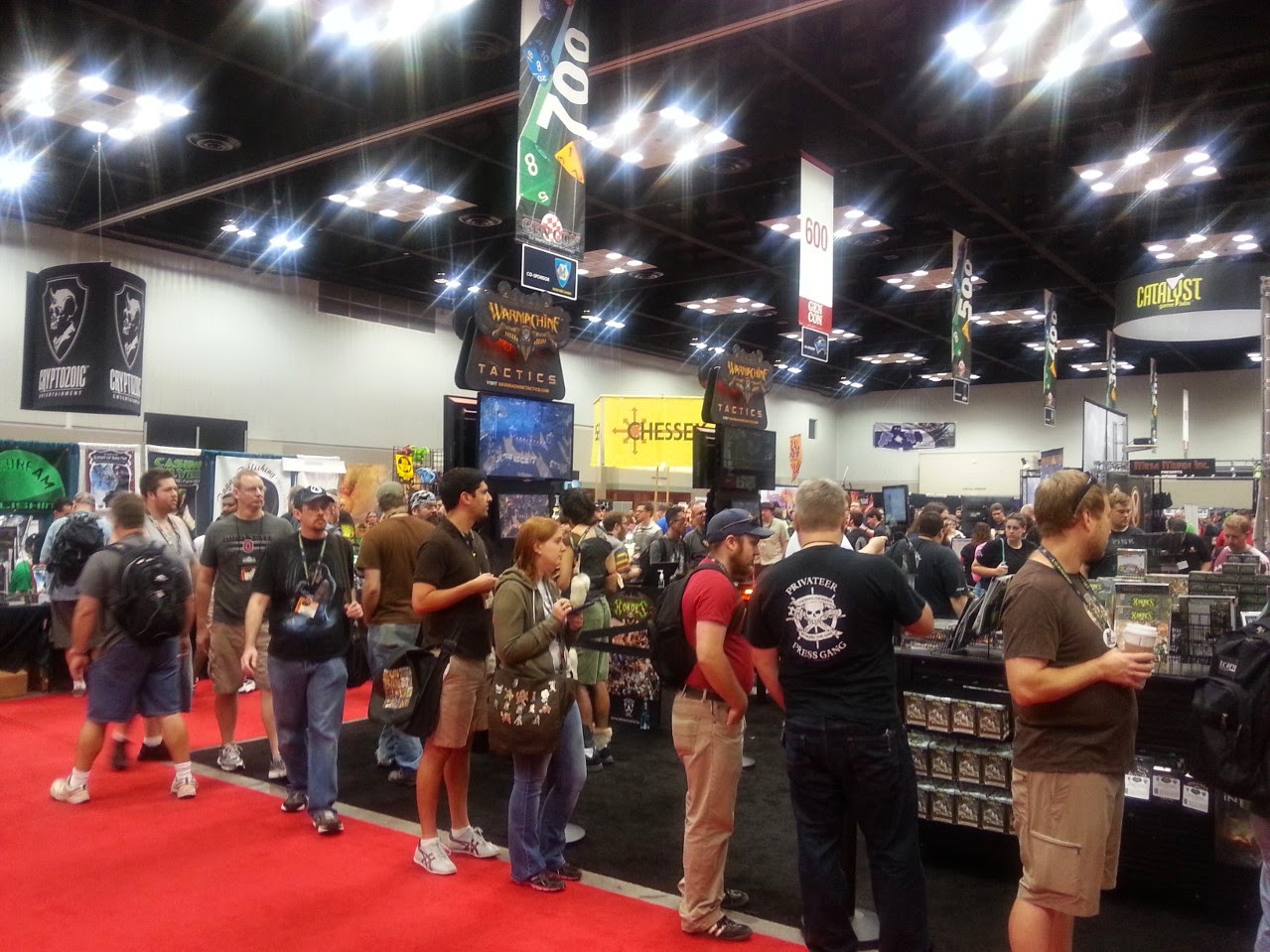 Speed Paint Contest.  I love painting but I recognize that I could be 'faster' at it.  I figured the best way to practice was to participate in one of these.  Technically speaking, I probably finished last since part of the base wasn't painted.  The figure itself wasn't finished but the base coating was pretty much done.  I guess it wasn't so bad after 45 minutes.  I only had one gripe about this competition though -- we were all supposed to be on an equal footing.  Same miniature... paints... and brushes.  I did one of the last speed paint competitions of the weekend and, not realizing that the brushes on the table were the ones we were going to use, I was dismayed at the terrible condition of the brushes at my spot at the table.  A previous painter did quite a bit of 'work' on the brushes making them very difficult to work with.  Honestly, I wasted time trying to 'fix' the bristles and bring them to a workable point for my work.  Stupid rookie mistake I guess but hardly fair IMO.  I'm not saying that better brushes would have won the day for me but that time was precious minutes lost.  The other thing I admit that I am less than accustomed to is mixing some of my paints.  I got accustomed to having so many colors and shades at my disposal with the Citadel paint line that I seldom mix much.  This also happened to be the first time I worked with Reaper paints too.  I did like their paints but the consistency did through me off at first.  Good experience though and it's an exercise I aim to repeat. 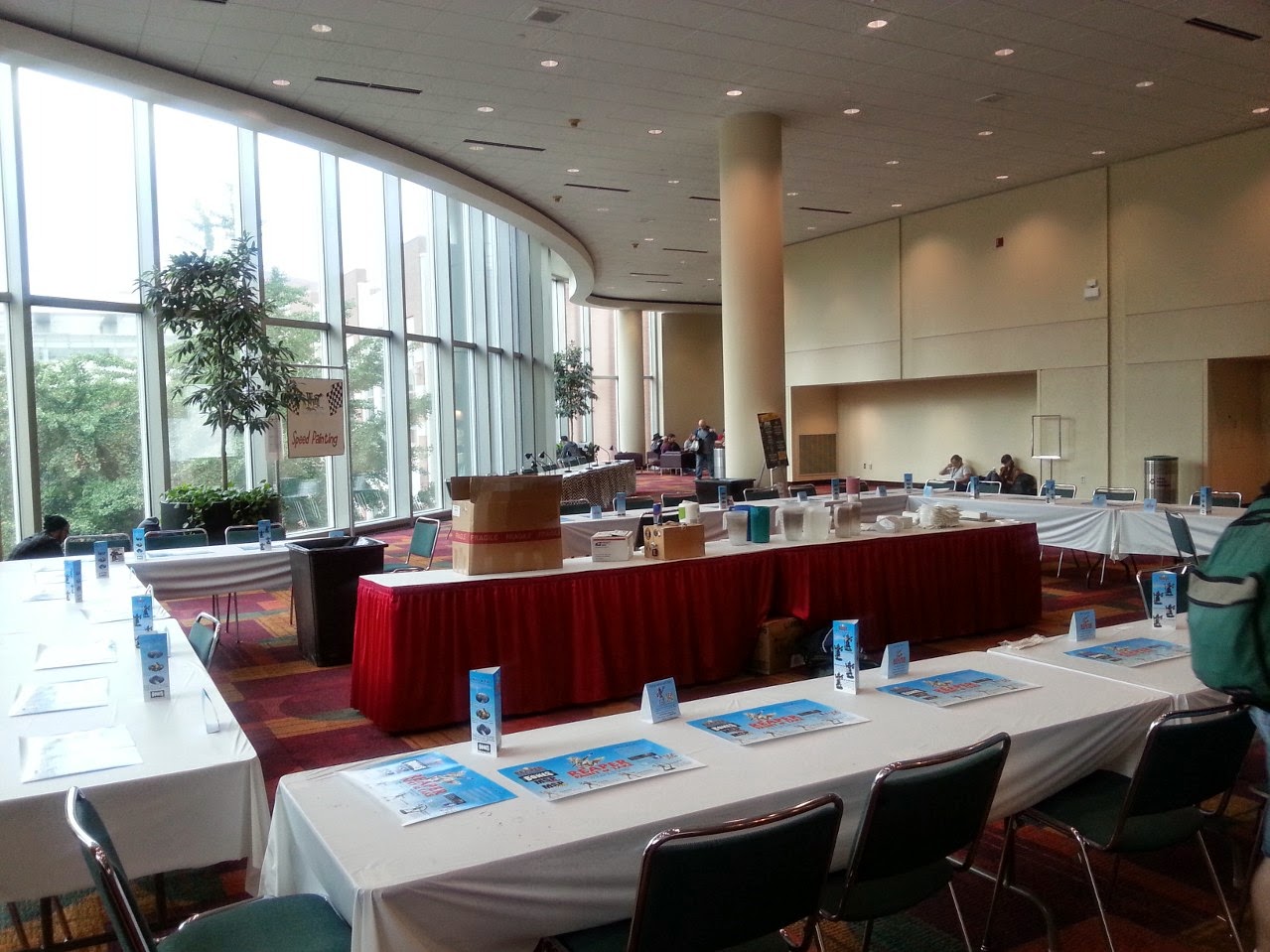 Hanging out with TLG.  An informal meeting of the Castles & Crusades Society and the Knights of the Crusade was held at a local pub.  It was a fantastic way to end Saturday and share a few drinks with the Trolls at Gen Con this year!  A necessary disclaimer: I got the following pic from the Jason Vey's page but I was the one behind the camera.  You can see some of my stuff in the background behind the crew on the ground.  That's my swag bag, and my red foam weapon lying there as I did my best to take a decent pic of Steve, Tyler, Todd, Tim, and Jason.  :) 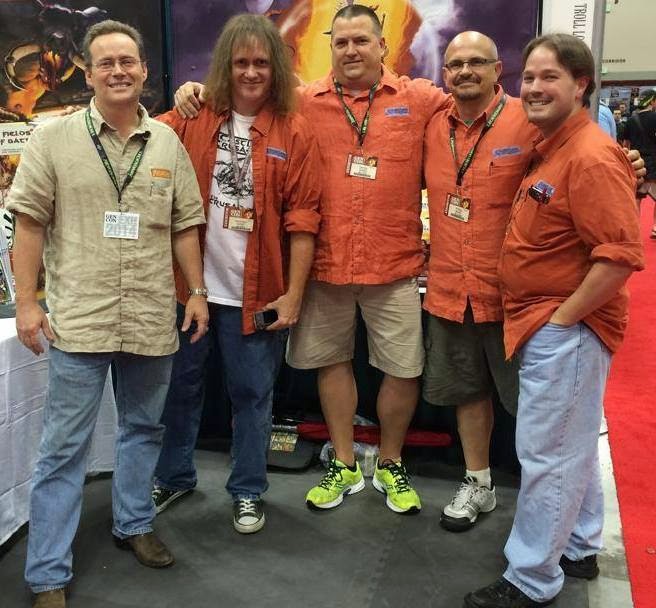 Aside from all that, I had supper with my friend John from Brave Halfling Publishing who came up to Indianapolis just to get together with me and Marisol.  After years of emails and phone conversations, it was finally great to see John in person.

Besides gaming, it's about the people and friends you meet and get together with.  Our hobby is a social thing after all.