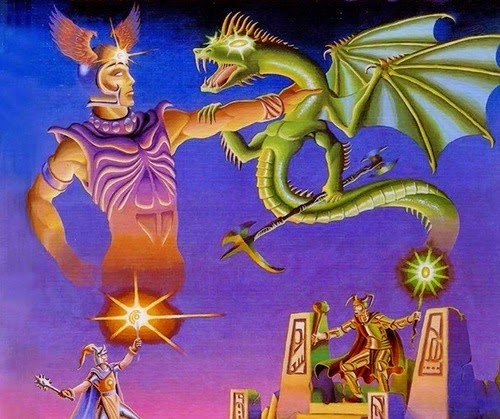 And here's the last of it.  There's a reason why I've avoided monthly challenges and it's largely to do with that fact that I don't have the time and energy to blog every day.  Or rather, if I did, I would need to learn to be a LOT more concise in my posts.  Thanks for reading and following nonetheless.  ;)

25. Favorite RPG no one else wants to play
26. Coolest Character Sheet
27. Game you'd like to see a new / improved edition of
28. Scariest game you've played
29. Most memorable encounter
30. Rarest RPG owned
31. Favorite RPG of all time

Hmm... looking at these questions gives me the impression that I've answered some of this stuff before.  Sure, the questions are EXACTLY the same but still.  My favorite RPG that no one else wants to play would be Call of Cthulhu which is the same answer I gave on question 6 which was phrased as 'Favorite RPG never get to play'.  It's hard to run a successful CoC game since a lot of it has to do with atmosphere for the experience itself.  I really hope to finally run a game (since I never will play this game) later this year when I get the new books.

On a more serious note, a game that I would like to see a new or improved edition of... This one is a tough one.  Just got it with Dungeons & Dragons.  I guess I would have to say some sort of improved / streamlined (lighter) version of Role Master.  I never played Role Master proper but I was introduced to Middle Earth Roleplaying which was a bit like Role Master Light.  Still plenty of tables but less than the standard RM game from what I understand.  A few years ago, there was something called Role Master Express.  It reminded me of MERP and I rather miss RMX which was discontinued a few years back.

Scariest game of all time?  Running my first public / store demo game I think.  Actual game play... I don't run scary games and I was fascinated and loved every minute of the CoC games I did play a couple decades ago.

The Rarest RPG owned.  Hmm.  As far as games themselves, I don't think I have anything that rare.  I have come across an interesting item now and then for sure.  I guess my second printing of the Deities & Demigods hardcover (complete with Cthulhu and Melnibonean mythos) would fit the bill for rarest item of value.

Lastly, my favorite RPG of all time would be the same sort of answers I gave for favorite system and system likely to be playing in 20 years time.  It will be D&D in one form or another or a variant like C&C.