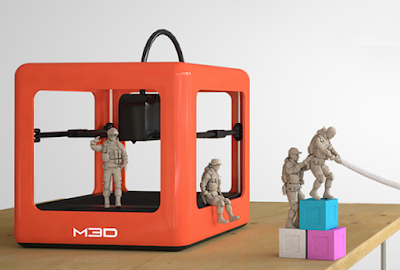 If you missed out on Part 1, you can find it HERE.  Otherwise, welcome and read on!

So after a couple of tragic experiences with the first two failed printers, I now had in my hands a third printer.  This printer was extensively tested and calibrated prior to being sent to me and I took the time I needed to ask and clarify various things about the printer to make the most of the experience and hopefully avoid any more pitfalls.  Sadly, nothing in life worth having is necessarily easy.

Printing proved to be challenging with this third printer.  Most of my prints were failing and there still a fair bit of shifting with my prints on this much like the last one.  I also had to increase the temperature about 25-30 degrees higher than the last two in order to get comparable results. Then I saw another instance of compression on one of my prints.

WHAT THE HELL WAS GOING ON?!

With all the cursing I was uttering, I'm surprised that I didn't end up summoning some foul demon from the underworld but the good news at this point is that I already established a dialogue with a manager.

I contacted him and outlined all the issues with the new printer and got a prompt reply.  He suggested I stop using the printer immediately and had a theory that could correct the Z-Compression issues, other shifting, temperature, and even instances of the nozzle crashing into the bed.  Power, or rather, brief interruptions of power may be the cause.  One of the fundamental flaws with the printer is a lack of power; there is already barely enough to power everything.  Between the temperature settings, fan, motor, there doesn't seem to be a lot of overhead left from what the adaptor supplies the printer.  The theory is that, in some cases, if the power flow isn't constant enough for whatever reason, it can cause unpredictable results which include instructions not being correctly received by the printer or greater temperature fluctuations and fan issues.  It was an interesting theory and a high buffer power adaptor was sent to me to try out.

This actually resolved MOST of my issues.  The shifting on the X and Y axis had already been largely corrected by placing my external fed filament above the printer instead of on the printer's side.  Once again, the motor isn't a very strong one and is pretty much getting barely what it needs to if there is the slightest pull or resistance from the filament, it could well result in the print shifting towards where it is pulling from.

I still noticed random shifts that would occur for no reason though.  Imagine a the print head randomly moving beyond where it was printing from by at least an inch and attempt to continue printing over thin air.  It makes quite a mess.  The manager was also at a loss but, when I mentioned I was trying to print at 100 microns, he recommended that I don't try to print above 200 microns.

There is a problem with that statement.  Mainly, the printer is advertised as being able to print in the 50 - 350 micron range.  One reason I bought this printer was because I wanted to print at 100 microns.  It was, to me, an important requirement.  As it was put to me, the specs on the website are 'a bit overstated'.  The hardware is theoretically able to do it but the software isn't optimized for it yet (despite being available there).  I started printing at no more than 200 microns and I started to have plenty of success now and no more random shifting.  Suffice to say that the software is still in BETA and still needs work.

So, at this point, all of my issues seem to have been resolved with the exception of one: Temperature.

After confirming if there was something wrong with the PLA (there wasn't and the problems were consistently present regardless of brand I used).  From there , I thought maybe it was a temperature sensor issue but I was compensating by raising the temperature setting.  As it turns out it wasn't a sensor issue.  The temperature problems persisted and got worse.  I was prompted by support to remove the cover from the print head to examine the wiring and, sure enough, this was the cause of the problem.  Apparently, the heater works on a closed circuit and, during transport, it looks like one of the connections started to slip proving that sometimes, it's the simplest solution that works.  I pushed the wire back in and heat has been working as it should.

All this was over well over a month ago now.

I have had a few more hiccups but, everything was manageable and I have many successes and very few failures since.  There was one problem which I quickly was able to figure out involving my extruder motor which had stopped working properly.  Support was able to get me a replacement part and I swapped the bad one out with no issues.

All of this has been a great and rigorous learning experience.  It took the entire length of my warranty period and three printers to sort everything out.  At the same time, 3D printing remains wonderful and still fascinating.  Despite my problems and moments of doubts, I ultimately do not regret my relatively small investment.  At a price of $350, it's still a hell of a bargain though I wasn't quite expecting as big as an investment when it came to the time to get everything in proper working order.  Having said that, I'm certain there are probably some more headaches just around the corner with my printer but, I'm much more prepared to do what maintenance and upkeep to get things going again because of everything I've gone through.

So... my final thoughts on M3D (both company and the Micro 3D Printer):

The support I was able to get was solid and customer support has gotten better during the past few months. If it wasn't for the support I got, I would have tossed in the towel and arranged for a partial refund (80% of the cost of the printer).  It is the support and willingness to back their product that stands out and, in my case, this was demonstrated many times.

The printer design itself is flawed and there are a few things that can be done to improve upon it.  Now that many kinks have been sorted out, some of the components have been changed and upgraded on the design, so anyone getting an M3D Micro now is getting a slightly better printer.  The biggest change has been in the a recent software release for the machine.  While it is still in BETA, it is a significant improvement over the version I had been using myself.  I now routinely print higher than I had before with no issues and the print speed has also improved.  Things are actually looking up in the software department as well.  That said, the internal feed and bay will cause nothing but issues if one attempts to use it.  The heater unit for the printer also has to be calibrated before going out to the buyer and, as such, there is no way to get a replacement heater should problems occur.  Apparently this is something that might also be changing down the line though I don't know if this will be for the current incarnation of the printer or a hardware refresh down the line. If they do a refresh, hopefully they will do something about the power demands of the printer and consider a heated bed option as well.

With competition growing as more and more economical printer options present themselves, M3D and any small 3D printer company developing their own designs, will need to work hard to stay in the game.  For the consumer and the advance of the technology, things continue to look bright for 3D printing in general.

I am a fairly early adopter to this technology and, I was expecting an uphill battle (to an extent) as began my experiences with it.  Despite my issues, I will still (cautiously) recommend this particular printer but there are others on the market I would easily recommend as well.  Next to buying a kit or simply the components to build your own, a 3D printer currently will not be much less this Micro 3D's offering.  But buyer beware and be sure you understand what you are getting into.