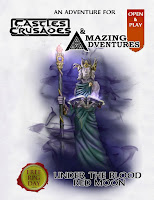 In past years, where I get asked to demo stuff from Troll Lord Games for Free RPG Day, there is an attempt to get a hold of me a bit earlier.  That way, I can check out and better prepare to run the current years adventure they put out to promote Castles & Crusades.  This year was a bit different for two reasons.

1) Communication with the store was terrible and badly organised this year.  I did not get a copy a day or two in advance.  Despite my efforts, the information and confirmation on how the store was running events this year just came too late.  I was only able to confirm that I would participate about 16 hours ahead of time and there was no opportunity to pick up the adventure early.

2) This years release was showcasing both Castles & Crusades and Amazing Adventures.

A release showcasing both systems with one adventure sounds cool and I knew this is what they were doing for this year.  But I just didn't know HOW exactly this would take form.  This is best described as an 'Open & Play' or 'Fast Play' module.  A very short info blurb on the general mechanics of the game, some pre-gens, and the module basically explains how to play the game as you are basically going through it.  It is a pretty good approach and a great way to start and learn to play a role-playing game -- especially if you are new to RPGs altogether.

There is something to be said about the brevity of some of these Free releases.  Most are quite short though, thankfully, there tends to be enough in them to make it worthwhile.  On occasion, you will get a release that is quite large for something being released for free.  Depending on the level of support for Free RPG Day, this could amount to quite a bit of money in free product being given away so you won't always see smaller game publishers doing this.  If you get something 'more', than the publisher has something to prove or they are really trying to make an impression and gain a lot of exposure.  Troll Lord Games has been participating since the very first year and their releases have always been decent.  However, I do feel that the ones from the past couple of years really stand out.  While they were a shorter page count than a standard module release, it had enough content to make it an interesting item to pick up.

With that in mind, I was a bit disappointed with this years offering.  Don't get me wrong, it is well written and a fun little romp with the same sort of page count as previous years.  The problem is that this isn't a single adventure but rather two adventures that are basically the same.  It is highly doubtful that you will run this thing back to back with the same group of players to play both C&C and AA.  As a result, some may just view this as a missed opportunity.

Under the Blood Red Moon is an adventure that takes place 'Across the Gulf of Space & Time' and while there are elements of that are, the adventure itself really isn't.  Essentially, an old man hires a party of adventurers to bury a scroll as an offering to a god and, the other adventure has the reincarnation of this man hire a party of adventures to retrieve it.  Same temple with four keyed locations.  Because of the similarities of the systems, both will play about the same mechanically speaking though there are a few differences between the two systems.

It would also be beyond the scope of a short release.  I think the only other way to do this is if you happen to be playing both games at one point or another with the same group of people.  It might be interesting to do one of them only to revisit months later and play the other one in the other system.

Quibbles aside, it's nice to see that Troll Lord Games continues to support Free RPG Day and that both major games they publish is getting some support.  Amazing Adventures is a great resource even if a pulp type game isn't your thing and I look forward to seeing more of it in the future.  I still think this year's free offering was worth picking up but a bit more variation between the two would have been nice.