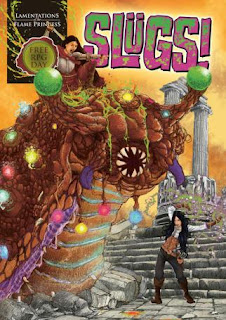 For the past few years, there has been one release that I have always looked forward to and sought out if possible -- the one from Lamentations of the Flame Princess, courtesy of James Edward Raggi. While not intended for children, the LotFP offerings have always been a bit darker, twisted, and imaginative. They are always presented in an evocative style and, at times, a bit perverse. As a small publisher, the publications for the past few years measure up very well and often surpass the quality of some of the larger and more mainstream companies putting out quality gaming material.  The first two years to see free LotFP products were a couple of wicked adventures titled 'Better Than Any Man' and 'The Doom-Cave of the Crystal-Headed Children'.  In 2015, there was no release for the event but, this year's release made up for it.

Not everyone likes James Raggi and the stuff he publishes.  Some go as far as consider him and his line successful only because of the 'shock value'.  Ignore those people.  A considerable amount of consideration and care goes into putting out every title and some titles to vary quite a bit in terms of tone.  Slugs! takes things a step further as a free-product though and, instead of a quick set of rules and a couple of dressed up encounters, Slugs! is a bestiary of sorts.  Not counting the the couple pages in the back dedicated to the LotFP catalogue, the accessory clocks in at 34 pages (albeit digest-sized).

And, with tongue thoroughly implanted in cheek, James decides to had fun with it and take the piss out of a few things.

The introduction itself really sets the tone for the rest of the book.  At first it almost sounds like a manifesto with a criticism of the Washington gaming establishment.  It didn't take me long to figure out what he was doing.  Part way through the introduction you have a paragraph that starts thusly:

And we're going to win. Believe me, we are going to win so much it's going to make their heads spin. It's going to be like we've build a wall to keep all the bad gaming out, and it's people like Fred Hicks that will end up paying, believe me. We can make gaming great again.


Frankly, this material is GOLD and we're just at the introduction. The entire bestiary is basically about having fun the way that gaming should be. If you read between the lines when you read the introduction, there is something of a critique as well and he makes a valid point. As a free product, the LotFP ones have always been incredibly impressive and useful -- not at all disposable.

So, the meat of the book itself are write-ups and illustrations of 16 different and weird giant slugs. If you never use the material for gaming, it should nonetheless be able to crack a smile on your face.  At the very least, some of the stuff will give you ideas. Other things might just make you groan.

The illustrations are black and white line art which works for the book and the cover looks great and, almost festive!  But I have one MAJOR issue with the book and many others will probably agree with me here.

With the first two LotFP releases, there is an Explicit Content warning on the cover (Ages 18+).  I'm not offended by the content and, for those that know me, my language is often colourfully-laced.  I love the illustrations and the illustration on the front inside cover was fantastic!  However, the image on the back inside cover alone should have should have warranted an Explicit Content warning on the cover.  There are a couple of other things that could similarly warrant such a warning as well.  So, unless there was a warning in the shrink packaging about the nature of this content and the game store was irresponsible with the access of this particular title, I just don't know why this cover didn't get the same treatment the last two from previous years did.

Honestly, that's my only complaint over this book.  It's fantastic and I'm personally not offended by any of it. I don't know if I'll ever use something like 'Slugatron' but the 'Ocular Slug' and the 'Rock Slug' are pretty awesome.  'Acid Slug' just rocks.

If you managed to score a copy of Slugs! then, rejoice!  There were 3750 copies printed for this year's Free RPG Day.  If you missed out, than I assume it's only a matter of time before it's made available online in PDF form as well and you can grab it then.  It is worth it and a nice little supplement that manages to remain distinct from the rest of the event's offerings this year.