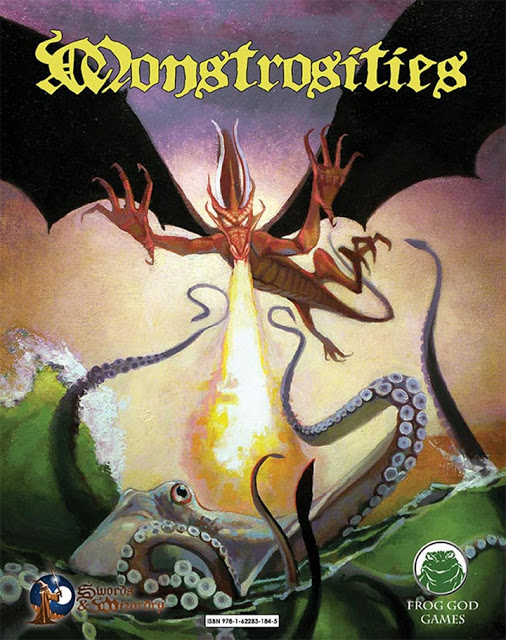 A week ago, I focused on the Black Dragon lot from the Swords & Wizardry Kickstarter.  For Swords  & Wizardy Appreciation Day, I kept things brief and offered up an adventure (still freely available HERE).  And now, to finish off the week, I decided to take a look at the Monstrosities book for S&W.

When I first signed on and backed the Swords & Wizardry kickstarter, the decision to back it in a big way was a no-brainer for me.  Aside from White Box released by Brave Halfling, the only S&W Wizardy material I had was the free PDF versions and the Rappan Athuk PDFs.  At that point, I still didn't receive any physical copies from the Rappan Athuk Kickster and wouldn't for another couple of months.  In principal, I liked it -- it was a stripped down / back-to-basics of the games I primarily played which made S&W material perfect to adapt to my needs and system I chose to play.  My long-time readers will know this tends to be Castles & Crusades.

However, when I backed the Rappan Athuk, I couldn't back near to the levels I would have liked or do the sort of add-ons being offered.  Rappan Athuk was an *expensive* Kickstarter.  By comparison, I found the Swords & Wizardy Kickstarter to be relatively reasonable.  The Black Dragon package allowed for a bunch of books I did not have but did desire for my gaming library.  The Tome of Horrors complete was one such book ... I own the original Tome of Horrors for 3rd Edition and I enjoyed the treatment done but never go around to getting the second or third books.  Naturally, given my preferred game system and style of play, it didn't make much sense to try and get these two other books -- I didn't really play 3rd Edition though I have some of the books and I did have a lot of 1st and 2nd Edition resources which are a lot more useful to me.  One of the books listed was a Monster book for S&W.

I didn't know much about it and took as just a new monster book and promptly forgot about it.  I mean, the S&W rulebook has a very nice selection of critters to choose from and, well, with the inclusion of the S&W version of the Tome of Horrors complete, it seemed like the Monster book was just that... just another monster book.  I also thought that it was a new book.  In actuality, it wasn't -- the majority of the book was previously made available through Black Blade Publishing back in around 2010.  Much like other free S&W resources, you can still get a free DOC file of the book from the Mythmere Games site.  This doesn't devalue the book at all though -- it's just that I didn't know since I wasn't that involved with S&W to begin with back when I first pledged.

What makes both very different is presentation.  Sure, from what I understand, there are some new critters but really, it's also expanded to accommodate art for all the creatures and new text to give each creature an adventure hook.  At over 500 pages (556 to be exact), you are talking over 500 monsters (there is one per page) with the addition of tables and resources to further supplement the books utility.  What's telling is the utility of the book judging by the quality and inclusion of creatures which seem so very obvious to have in the first place.  Of course, you'll also find the selection of monsters from the S&W Complete book also in Monstrosities which make it the go-to place for your critter needs.  Another feature I like is the dual stat blocks... you have both the full stat block and the condensed version for every entry.

At a time where I am seriously considering downsizing the gaming library, Monstrosities as well as the other S&W resources are those I would hang on to as 'source reference material' in favor of even some of my 1st and 2nd edition books.  That is how much I appreciate this book and as much as I like the Tome of Horrors complete, Monstrosities isn't really a compilation originally made for 3rd Edition.  The first entry I looked up in my physical copy of the Tome of Horrors Complete for S&W was Orcus and imagine finding a hold-over from 3rd Edition in the form of a DC 44 Will Save against Fear!!  I can understand how this can happen, the Tome of Horrors Complete for S&W is even larger than Monstrosities.  I don't expect to find any of this sort of errors in the Monstrosities book which is just nice to know.  ;)

In terms of price, right on the Frog God Games storefront, you can find it for $49.99 and a limited number of signed and numbered copies are available for an additional $10.  Some may find this a bit expense but compared to the cost of other Frog God Game products of comparable size, this is an absolute bargain!  Consider that the Tome of Horrors Complete, Rappan Athuk, and the upcoming Razor Coast campaign book are all going for $100 each!  Note that I'm not suggesting that these other books are not worth the cost but some may find a $100 price tag a bit cost prohibitive.  If you prefer living in a digital world, a PDF copy of Monstrosities will run you $24.99.  Both are available HERE.