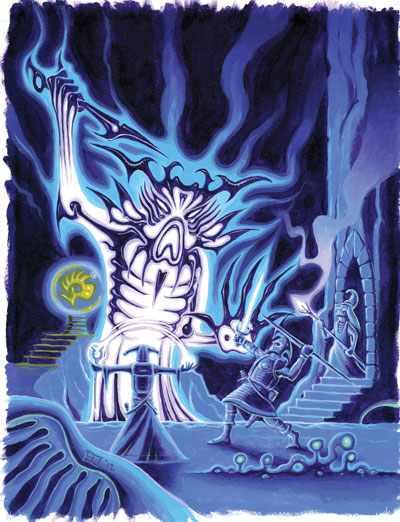 During the extended absence from the blogosphere, I was fortunate enough to get a package I had been eagerly awaiting since the Kickstarter was successfully funded on September 4th, 2012.

This was Black Dragon package from the Swords & Wizardry and the box was just LOADED with some goodies!

Before I delve into that particular Dragon Hoard, I want to talk about about S&W itself.  My first real experience with it was a few years back with what is known as the 'White Box' edition of S&W as published by Brave Halfling Publishing.  At the time, I had recently formed Arcana Creations and the first retail release, 'The Secret of Ronan Skerry' was just about to to be released into stores.  Mythmere Games had announced that Brave Halfing Publishing was going to publish and release a 'White Box' edition of the game and, once it was finally released a few months later, I was presented with my own copy. 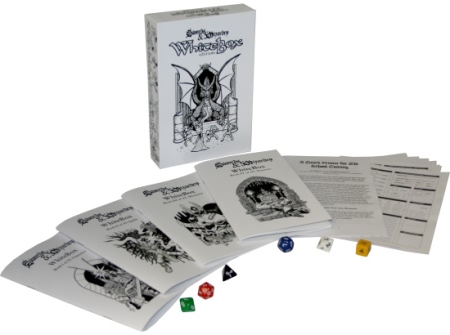 Up to that time, I was moderately aware of it and I felt it was a good thing to have.  Much like Castles & Crusades, it was a game that took a couple of queues from newer editions and married it with a the classic feel and style of, well the original edition of the game (the three lbb's).

What does that mean exactly... in the White Box edition, you have three classes (Fighter, Cleric, and Magic-User) and three races not counting human (Dwarf, Elf, and Halfling) to choose from.  It offers both ascending and descending Armor Class options as well as a single saving throw number (though you can always use a saving throw matrix consisting of different categories).  Like the original edition of the game, this is a simple game but one that has everything needed to game.  Beyond what is supplied, the GM will have to supply and for many, this will be fine.  It's rules light and easy to dive into and play.  The text and approach are certainly clearer than the original edition ever was but I suppose that this is to be expected after close of four decades of existence.

Swords & Wizardry Complete on the other hand consists of this plus and additional 6 classes with the addition of a Half-Elf as a racial option.  No love for Gnomes it seems.  ;)

The differences between Complete and the White Box don't end there.  The Complete version also includes various options or alternatives for a few things (such as the order of combat) as well as additional rules for Aerial, Ship, and Mass Combat as well as Sieges.  You have material and tables for dungeon and wilderness adventuring as well.  In short, material that goes very much beyond the scope of the White Box.  Naturally, the book also includes a decent selection of spells and other magics as well as monstrous menaces to the delight of the would-be adventurer.

It was the production done by Frog God Games that really made this game stand out though and when they announced their Kickstarter last year with the goal to produce quality, signature-stitched hardcover rulebooks for the game, I decided to go and back this project at one of the higher levels available -- the Black Dragon. 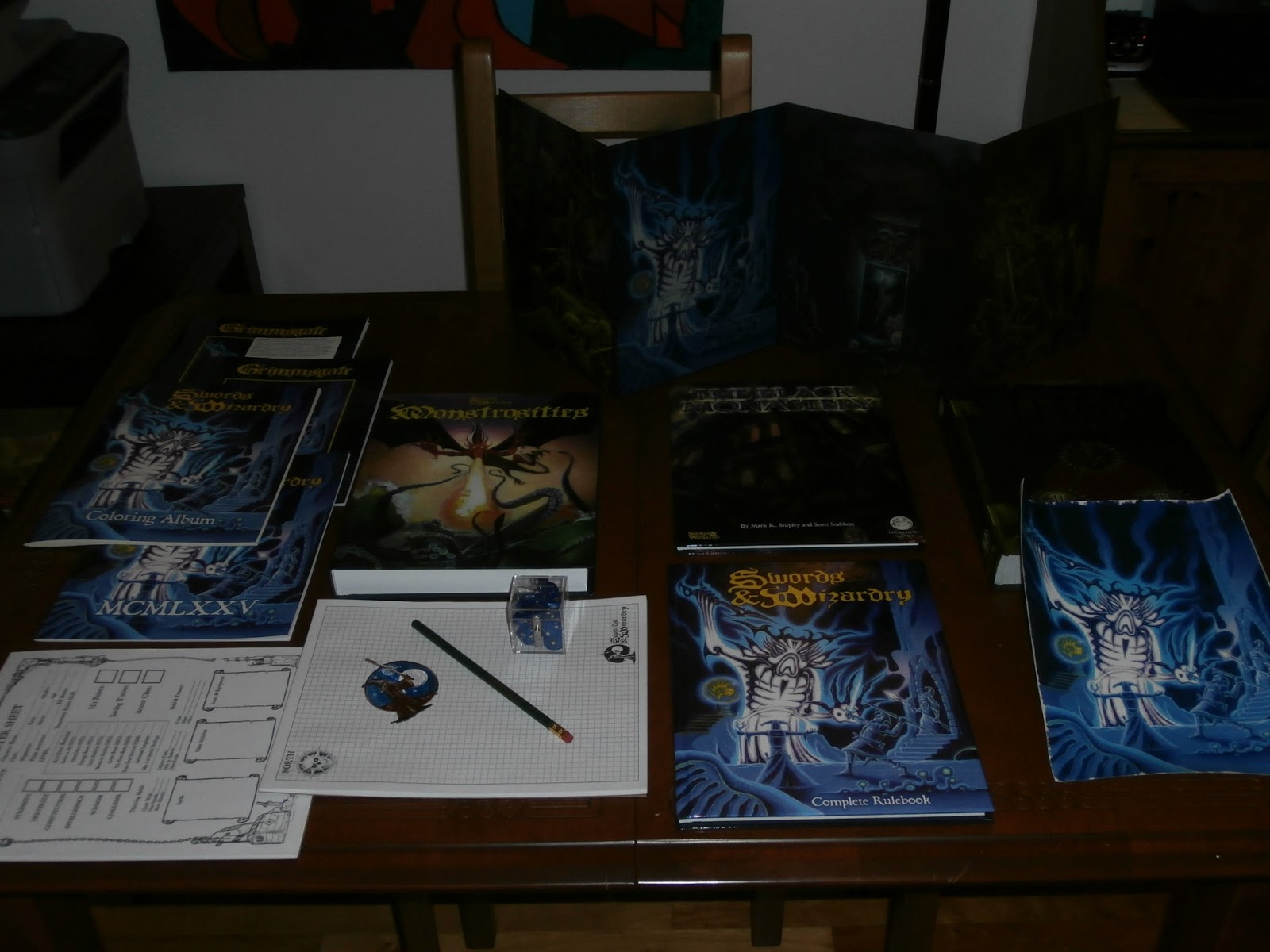 It was quite a haul ... the S&W Rulebook and Monstrosities book (both signed and numbered), a copy of the Tome of Horrors Complete for S&W, a copy of the Black Monastery, a pad of character sheets, graph paper, pencil, dice, a patch and a couple other modules (plus an extra one being thrown in as a misprint due to the wrong cover used).  There's even a coloring book.  Oh... and a canvas art print of the cover art used signed by the artist, Erol Otus -- pure awesome! 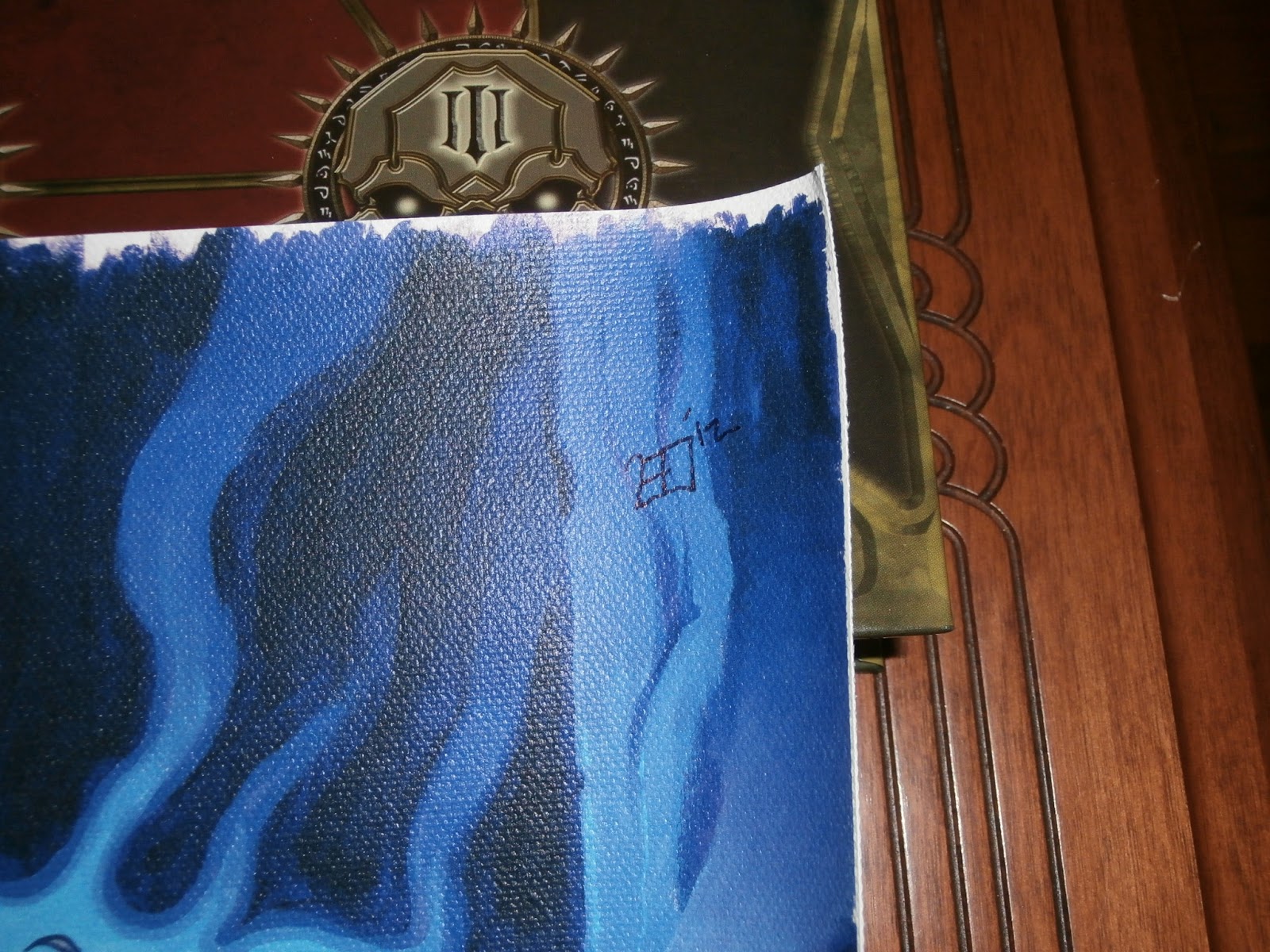 The canvas print has since been framed and hung up on the wall.  :)

In short, it's a lot of old school goodness.  Sure, it isn't a perfect clone of the original thing nor would I want it to be.  This is for the same reason why I prefer to use C&C over 1st Edition AD&D -- I don't mind the little changes C&C has made when it used the OGL and material from the SRD to create a game to give the feel of a game with that 'old school vibe'.  When it comes to S&W, I'm happier with a single saving throw number and not five to play with.  I'm happier to have different weapon damage and not just a d6 for all weapons.  Sometimes it's the little things and the little things with the game makes all the difference for me as both a player and a GM.  It despite these little things, it keeps everything simple and it's hard not to acknowledge the elegance in that simplicity. 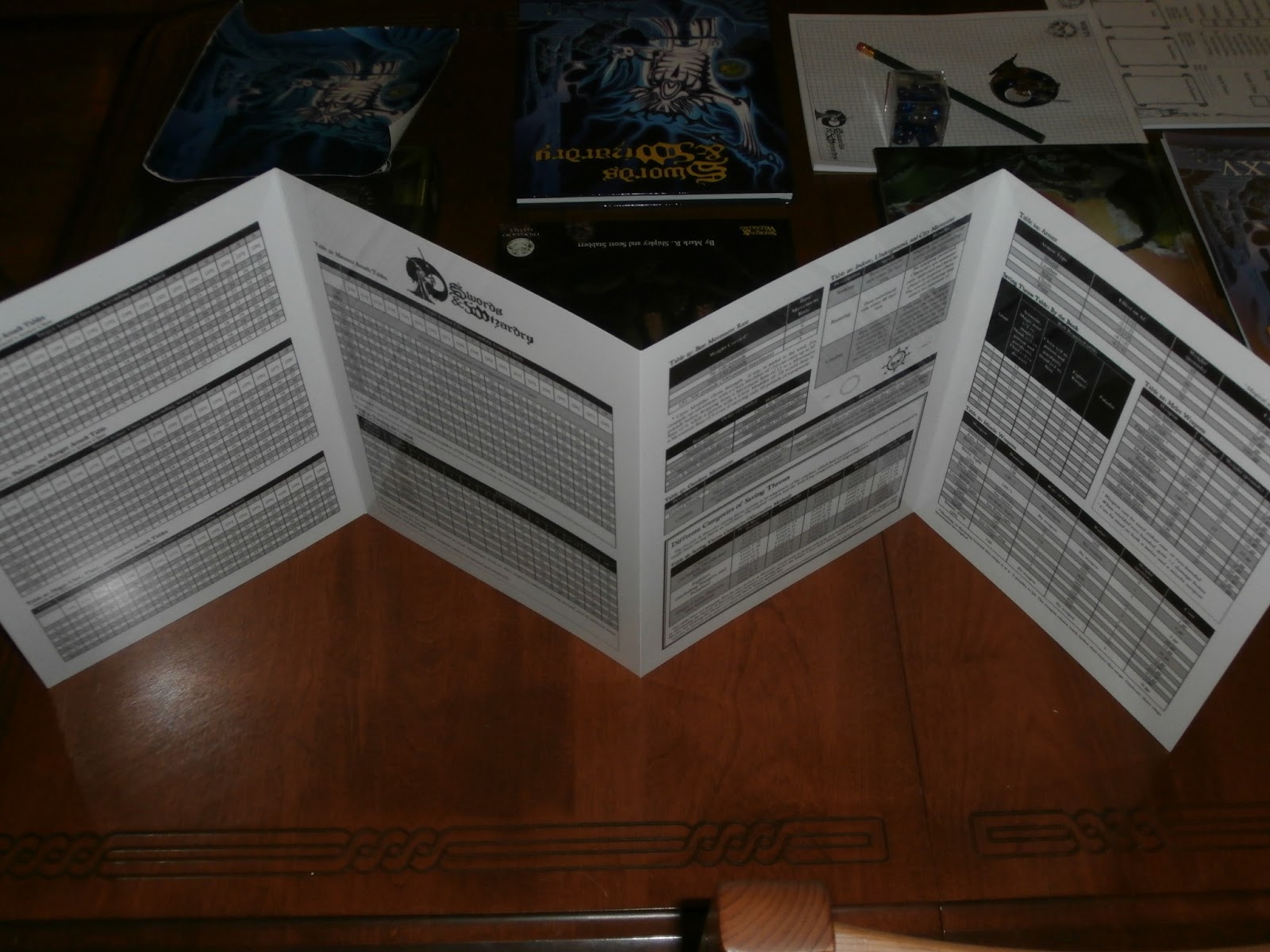 In what has become a 'flood' of retro-clones and games sourcing from the same SRD made possible with an OGL, it is nice to see Frog God Games give this the professional treatment it deserved.  In doing so and with the game being as simple and lean as it is, it has created a 'source work' where many a gamer can fall back on.  This is something that many people and company have noticed and in the case of WOTC, have decided to respond accordingly.

The Swords & Wizardy Complete rulebook would make a fine addition on a gamer's bookshelf and, this particular hardcover edition has a MSRP of $34.99 and Frog God Games still has signed and numbered copies going for $10 more the cover price.  Some may find those prices a bit steep in price given that the book numbers only 134 pages including the index (there a six pages that follow with the names of the backers for 140).  If you don't mind a PDF, you can get it for $9.99 *OR* you can download the less inclusive Core Rules or White Box rules for free from Mythmere Games HERE.  These are certainly worth grabbing if only slightly curious.  If you want to purchase direct from Frog God Games to check out some of the other items they have for S&W or just purchase the main books, you can click HERE for their storefront.