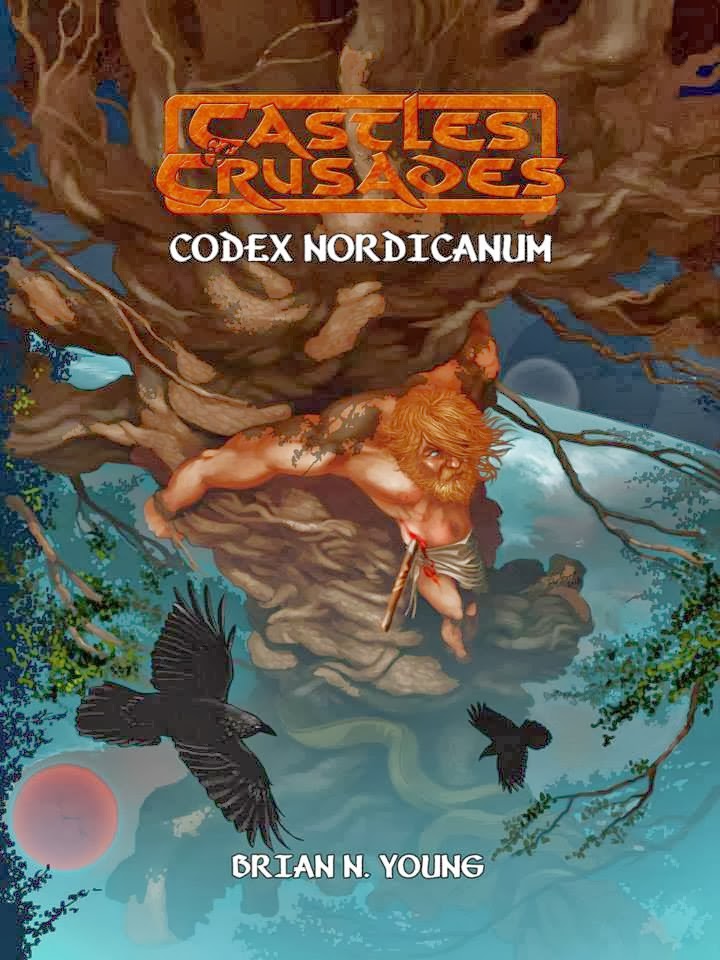 During the month of February, I pushed (promoted) the latest Kickstarter from Troll Lord Games rather hard.  I was proud to back it after the amazing work that resulted in their Codex Celtarum book last year.  This first book won me over despite not being a strong fan of Celtic lore so I was immediately intrigued by a Norse book.  The production for the Codex Nordica book was rapid and this is a trend I would like to see continue with other Kickstarter funded projects.  One of the perks of backing the Codex Nordica project very early on was the chance to get a free softcover edition of the book (if pledging $49 or more) on top of everything else.  As of last week, some lucky backers have already gotten their bonus softcover copies.  Here, in the Great White North, I'm not so lucky but with the generosity of Troll Lord Games, I was given an advanced copy of the PDF for the purposes of this review.

To be clear, this would represent the text as it appears in the early softcover copies.  If there were any corrections made afterwards, I am not aware of them.  On my part, I did notice a couple issues which I brought to their attention so I hope that these make it in  Last note: The pic is an older promotional picture featuring the first title tossed about 'Codex Nordicanum' -- thankfully changed to 'Codex Nordica'.  I have no idea if this is the cover piece still being used for the book.

The book is broken up into eight chapters and, like the Codex Celtarum, the author (Brian Young) has certainly put in some time, effort, and research in the writing of this book.  They are:
It is important to state that the first two chapters offer a brief but concise overview of the history and mythologies of the Norse.  Since the Codex series are each focused on a 'group' or 'culture', a solid baseline of information is important for the would-be gamer interested in picking this up and run a game in, what is effectively a setting.  Anyone who loves a bit of history and mythology will likely lose themselves in the material and narrative presented in these opening chapters.  The author beings with the facts and then moves on to the various myths.  This is expanded upon with the exploration of the Nine Worlds presented in the second chapter.

The Nine Worlds gives a decent overview of the realms on Yggdrasil (aka, the 'World Tree') and enterprising game masters will have a great starting point for a series of adventures in these worlds.  What I found was a nice touch was the inclusion of random encounter tables for a couple of these realms though it should be noted that most of these areas do not have the same sort of treatment.  I found this a bit curious but given the lore available in these pages, the lack of more tables will largely be unnoticed.  The Nine Worlds does more than just give overviews of these realms as history comes to the forefront once more as the the Nordic Lands are equally detailed with the same kind of attention to detail that the mythological component received.  A nice map of Europe provides a quick and handy guide to showcase the various Viking colonies from the 8th century onwards as well as routes.

The two chapters that follow are more devoted towards Castles & Crusades (and other similar FRPGs) with Chapter 3 offering just over 20 pages to new critters and Chapter 4 presenting a couple new classes and magic for the game.  'Magical Beasts & Monsters' is a small bestiary whose contents will largely be unfamiliar to your typical fantasy gamer.  Aside from the inclusion of entries like the Dragon, Kraken, or Troll, the differences with these are mostly highlighted and set them apart from the 'standard' entry.  Old Norse names are included as well with the exception of the Kraken.  There were certainly stories of the 'largest monster of the sea' (a Hafgufa?) which could describe a Kraken quite well and its inclusion here is a lot more fitting that trying to shoehorn it in GREEK MYTHOLOGY!

'Wizardy & Enchantments' presents the Seidkona class (sort of a runic sorceress) and a Volva (Prophetess).  At first glance Seidkona class offers a slight flavor twist with what basically a wizard but the details are fun.  This class doesn't use a spell book but rather the spells are sewn into their clothing.  They also have an enchanted staff (a spinning distaff) which they require for their spell casting.  Another slight twist is an extremely high charisma (19-20) will grant the class the ability of a Seer (detailed further on in the chapter).  The Volva makes for an interesting class and, aside from abilities of small and large visions befitting a prophetess, the spell abilities are intriguing as the class can gain a second spell list to draw from and use.  They start off with clerical and, at 5th, they could choose another, say Illusionist for example.

One of the things that makes Chapter 4 interesting are the details given on the Futhark and the incorporation of them as 'spells' for the game.  As someone who has done a study on the Norse Runes a number of years ago, I can't help but applaud the disclaimer the author gives on the nature of the runes in Germanic and Nordic society and what little we actually know today.  These runes can be used in game as the Game Master see fit but, they are readily to use in the same manner that rune magic is dealt with in Troll Lord Games' release "Rune Lore".  The chapter also devotes a couple of pages to the 'Blot' (Sacrifice), Ring Oaths, and Charms, and offers a few odds an ends towards the end of the chapter.

The fifth Chapter is a return to the stories and beliefs of the Vikings.  There are no mechanics in the chapter entitled 'Gods & Giants' and is truly stat-less.  It also puts the 6 pages devoted to the Norse gods in "Of Gods & Monsters" for C&C to shame.  The fifth chapter is rich in story and lore concerning the iconic figures in Norse Mythology -- both the gods and giants.  This chapter is further enriched with the inclusion of text talking about pagan religiosity, sacred sites, rites and beliefs.

By Chapter Six, the pendulum swings again as the chapter offers a bit more system material for Castles & Crusades as well as more substance for the use in your Norse-themed campaign.  New classes in this chapter include the ever popular Berserker and Giants Killers.  Perhaps more importantly is this chapter called 'Warriors & Battlecraft' is accompanying material on warriors, honor, and fighting techniques.

Up to this point, the organization of the books is fairly straight forward and well thought out.  Chapter Seven is essentially 'everything else'.  It's hard to find a good title for this chapter since it is a weird and diverse mix.  Once again, valuable information and definitions, some tables, a selection of names, and even how to use the Eddas in gaming.  Because of the nature of this chapter, it almost makes the last chapter of the book feel a bit out of place.  The final chapter, 'The Precious Works' are about the various items and weaponry of legend and their owners.  It almost feels like a lot of this material belongs in Chapter Five instead of the very end of the book.

Reaching out to the author, I was able to confirm a couple of little truths about the book.  One of these things is what happens in the editing and layout process.  The last chapter of the book seems a bit out of place in part because it is.  One of the stretch goals in the campaign was additional material and it seems like this is it. It certainly doesn't take away from the book and, given the contents of the final chapter, it is a welcome addition. 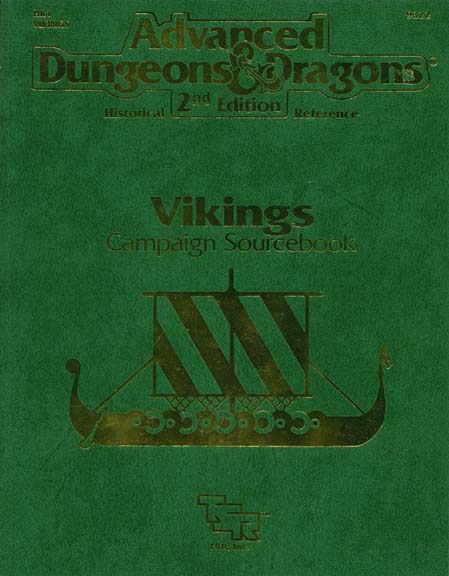 All in all, I think the Codex Nordica is an outstanding book and, from what I understand, the upcoming Codex Germania should follow nicely in its footsteps. Some people looking at the Codex Nordica may be tempted to measure it against the TSR produced counterpart  published over 20 years ago.  I know because I considered that very thing when I looked at the previously published Codex and the Celtic material it presented (you can find that review over HERE).  With two books in the series, it is certainly shaping up to be its own thing.  At most, this volume (like the one before it) is very complementary to the green book counterpart published by TSR over 20 years ago.  This is not an attempt to recreate resources that have come before it and the series is doing a nice job defining itself as a worthy resource to supplement your gaming bookshelf.