X-Wing Miniatures is hardly a game that needs much introduction or even a review.  However some gamers who may be interested may not have given it a shot yet so I thought I'd share how I came into the game, my gaming experiences, and my general thoughts. 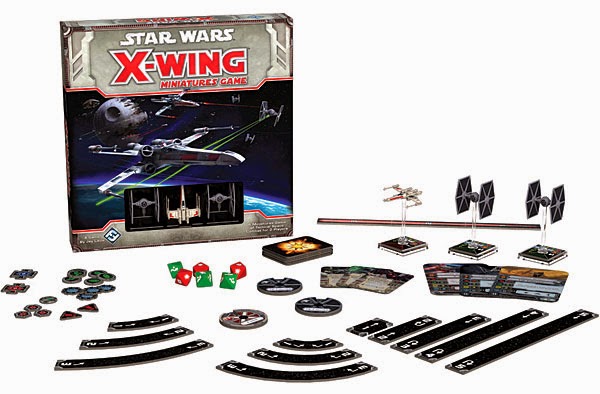 In short, X-Wing miniatures is an excellent and well thought out game which has already won a variety of awards since it was introduced a bit less than two years ago.  Produced by Fantasy Flight games, components are of a decent, durable quality but the love of all things tokens could be a turn-off for some people looking for an easy game to get into.  When it first came out, I was immediately impressed with the look of the miniatures.  They are plastic and pre-painted but the details certainly caught your eye.  It's hard not to imagine how any fan of Star Wars wouldn't be potentially interested -- even from just a collecting standpoint.  What turned me off initially was simple -- the price for the starter alone (containing a crap-load of tokens but only two Tie-Fighters and a single X-Wing) seemed a bit high at the MSRP of $39.95 and individual ship expansions costly themselves ($14.95 and up).  I successfully avoided temptation even though my money was quickly spent in other ways.

A month ago, running a Castles & Crusades game at my local game store for a sort of 'mini-con', I was awarded a door prize.  The prized ended up being a Tie-Fighter.  At first I didn't think anything of it but I thank the store owners thinking that maybe a friend of mine who played might be interested in it.  Talking to him the following day, he mentioned that another store was holding a sale on all their Star Wars miniatures gaming stuff to the tune of 25% off.  This effectively meant that same starter was $30 instead of $40 so I made what some would consider a rash decision to pick it up as well as the Millennium Falcon and an Imperial Shuttle.  Without knowing much about the game, save that it was point based, I figured that the Falcon, an X-Wing would be a decent match up against three Tie-Fighters and the Shuttle.  And since the discount applied to everything, I saved a bit of scratch and, at the very worse, I had some cool models to display of could turn around and sell everything again and not take much of a loss all things considered.

I did not regret the purchase. 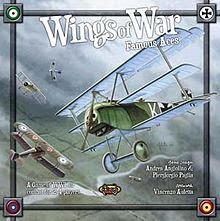 The first thing I did was read the quick start rules and then dive into elements of the full rules of the game.  The game is a lot simpler that it appears as far as mechanics are concerned but given the pilot differences and modifications, a whole lot of customization is present as well.  It also reminded me of another game I liked published a few years ago (also by Fantasy Flight Games) called Wings of War.  Wings of War was a dog fighting game and some of the basics in that game are present in this one.  I also linked Wings of War a lot but didn't get into it much as the models seemed a bit pricey too.  As biased as this may sound, X-Wing Miniatures seems to have more going for it though as far as options and customizations are concerned.

The second thing I did was to eyeball base point values of my ships.  As it turns out, I did pretty good.  It was possible to pit all my ships against each other and, a friend and I did just that the second time we played.  The first time we played, we just tried the simplified rules set up in the Starter... X-Wing vs two Tie Fighters which was something like a 25 point game.  The second game was just shy of 100 (I think the count was 93 for each of us). Suffice to say that the second game seemed very one sided.  Tactically speaking, I kept a tighter formation with all of my ships and with a couple of moves that my opponent didn't expect (including coming to a dead-stop with my shuttle), I made quick work on that X-Wing.  Afterwards I ended up chasing the Millennium Falcon around the map while taking some shots until my opponent conceded victory as I was closing in for the kill.

I was immediately hooked though and, through some online sales, managed to grew the number of ships significantly.  One more Tie Fighter, one more X-Wing, a pair of Y-Wings, a B-Wing, a Tie-Interceptor, and a Tie-Advanced.  Played again today and decided to do a 75 point game and I was playing Imperials.  Things didn't go so well for me.

My build consisted of 3 ships... a Tie-Advanced (Vader baby!) and two elite Tie Fighter pilots.  Fighting against a couple of X-Wings and a B-Wing.  I like to think as B-Wings as flying tanks and I decided to make this my priority.  Being new to the game, I'm sure to make some mistakes but sometimes luck plays a few tricks on you too.  As our forces closed in, I managed to score some solid hits to lower the enemies defenses (shields) pretty quick.  What I didn't expect was what the two X-Wings had in store for Vader.  Both X-Wings locked on and fired proton torpedoes.    The first shot was evaded well enough but the second one hurt -- all his dice were hits (one of them a crit) and all my dice were blank.  My shields go down and I take a hull point and I have two hull points left.  I then shuffle and reveal my critical hit card on my ship.  "Direct hit... take two hull points damage."

And there we go, in the second or third turn of play, the Tie-Advanced and Vader is gone.  I'm left with two Tie-Fighter against two X-Wings and a B-Wing and my strength (point value) has been cut in half.  I try to bring things around knowing I made significant strides toward eliminated the B-Wing so I press on.  At one point in the match,  the B-Wing and two Tie-Fighters are out of range of the X-Wings but within range 1 of each other and all within their firing arcs.  My two Ties fire first and the first has five attack dice against him and he is brought down to one hull point.  The second Tie takes the shot but the shot is evaded.  The B-Wing fires on that second Tie and successfully destroys it (having been previously damaged to 1 hull point from before).  With just one Tie-Fighter left, I look at the odds and concede victory to my opponent.

It was a great match but luck certainly was a factor in that game but I like that since you can still stack odds through customization and combos.  These were just matches (albeit fun) and there are still mission and objectives you can do instead of just pitting battles against one another.  There is a lot of strategy involved but the game is simple to learn and get into.  All of these are great things!

Of course, for Fantasy Flight Games, it's all good for business and my only concern would be long-term sustainability.  Since the game has come out, various expansions and starters have been flying off the shelves and doing quite well.  In some cases, it is difficult for retailers to keep elements of the game in stock.  However, since the game has initially come out, we have seen the following releases (in no particular order):
All of these have appeared in the classic movies except the HWK-290 (I'm not counting the Imperial Aces Pack as these are Tie-Interceptors with a fancy paint job).  The HWK-290 first makes its appearance in the Dark Forces video game.  Some of the newer ships coming out are also have made their first appearances in other video games such as the E-Wing, the Tie-Phantom, and Tie-Defender.  Of course, a couple of bigger ships are also making an appearance this summer like Tantive IV.  That thing is massive compared to the ships in the game so far but, given scale, I don't think we'll see a Star Destroyer anytime soon.  ;) 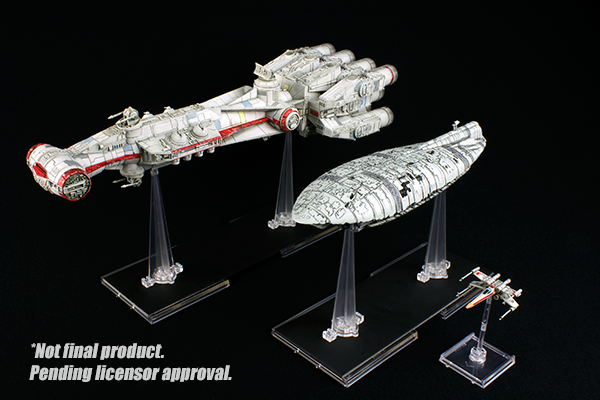 So, what happens afterwards?  Where will they mine next?  Prequels maybe?  They have been releasing about 'two waves' a year so far and this summer's release will be the fourth wave.  They would easily put out mission/scenario books... do some more alternate Ace Packs (paint jobs) and I know there is a Rebel Aces Pack coming out soon too.  Regardless, it is a great little game and once I am eager to expand more upon and even participate in some tournaments too.