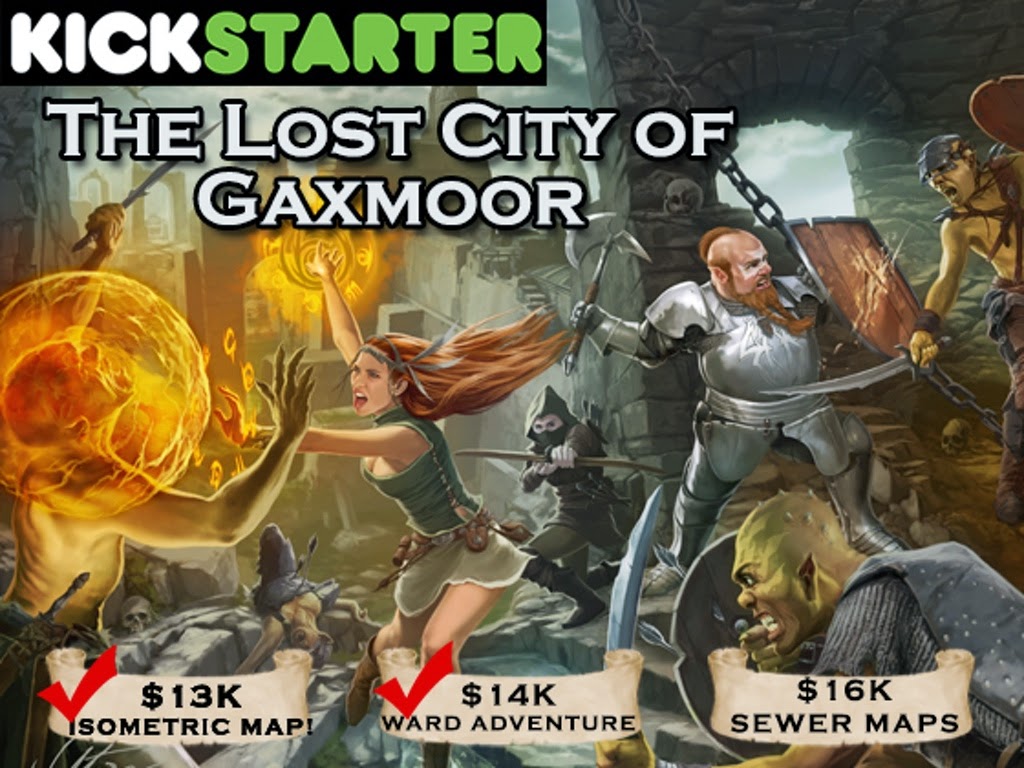 About 15 years ago, Troll Lord Games published a large adventure module for the d20 OGL for D&D (3rd Edition).  They have since moved away from that system to concentrate on Castes & Crusades and the SIEGE engine mechanic but Gaxmoor remained a favorite long after it went out of print.  What made this adventure stand out?  It was written by Ernest Gary Gygax Jr and his brother, Luke Gygax. 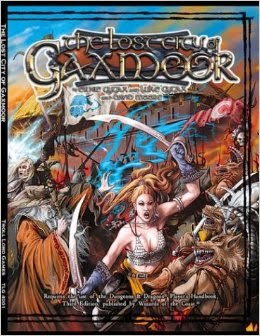 Gaxmoor is presented as a legendary lost city and was teased in the original 'Codex of Erde' released by TLG in 2001. The Codex contained an introductory adventure written by their father, Gary Gygax.  For some fans, this alone is well worth tracking down an older copy of this book.  As a d20 module, 'The Lost City of Gaxmoor' had the style and flair which was reminiscent of the D&D adventure modules of old.  This sort of design methodology to adventures wasn't to everyone's liking but those specifically looking for something that was clearly influenced by Gygax didn't need to look very far.  His sons did an admirable job in putting this together and while some of the d20 work on it was hit-or-miss (Third Edition was still quite new and decidedly more detailed), a lot of people liked it.

After the initial print run, it wasn't reprinted and when TLG moved away from much of the d20 material at the end of the Third Edition era, this city became 'lost' once again and was returned to its rightful creators -- until now.

There is a Kickstarter (and, let's face it, there is ALWAYS a Kicktarter), to bring back and republish a Castles & Crusades version of 'The Lost City of Gaxmoor'.

Come to think of it, that's wrong.

'The Lost City of Gaxmoor' has been republished for C&C and those lucky few who attended Garycon a couple of weeks back could have picked up a softcover copy of the module.  The successful Kickstarter which is in it's final hours now is to do a hardcover run of this large and sprawling adventure.  Those who weren't fortunate enough to attend were still able to snag a copy of the softback if they pledged for a hardback as an 'Early Bird' (no longer in effect).  Frankly, the objective here is very modest and the work is already done -- the book already exists.  This effectively is the closest thing to a sure thing that a Kickstarter can get.  Obviously there are stretch goals on top of what was already promised and many were already passed including a couple of extra modules, poster map, map booklet, and extra isometric maps.

The $25 level the hardback, poster map, and PDFs of those and stretch goals.  The $59 level ensures that all the stretch goal material is also in print and throws in a model template from Fat Dragon games, and a pretty cool T-Shirt.  There is one bonus goal being worked on that will also give people at that level and higher a nice glass mug.  There are other pledge levels available as well.

If interested, I suggest visiting their Kickstarter over HERE.