Challenges with the Haunted Hightlands Kickstarter 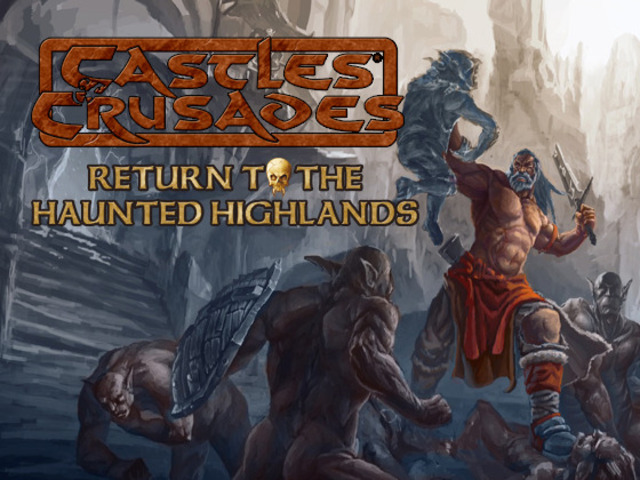 Well, Troll Lord Games launched a new Kickstarter just over a couple weeks ago and the project is getting done but I have some concerns.  First off, let me say that the Haunted Highlands setting absolutely rocks.  Penned by Casey Christofferson whose most recent published gaming book was the Free City of Eskadia (read a bit about it HERE), the Haunted Highlands was the background setting for a series of adventures published by Troll Lord Games a few years back.  The modules in question are as follows:

The Castle Keeper's book is basically the collected series of DB1 through DB6, now revised and expanded with more setting material, more monsters, and more treasure in addition to the collected adventures.  It promises to be over 200 pages.

The Player's book is smaller and will contain setting info for players, new classes, spells as well as the expanded and revised text for another accessory previously published entitled 'The Black Libram'.  In this book are the 'Siege Engine' rules from the C&C core books.  Now this last part is kind of interesting and has me wondering if the Players Guide is truly 'self-sufficient' or not.  I am also wondering if this is really necessary.

I suppose the same can be said for the whole set.

Don't get me wrong, this will be quite nice and I much prefer having this all together than spread out over several modules.  The issue is value or rather the perceived value for this Kickstarter.  I know I have sat on the fence on past TLG ones but I have *always* given it because the value was there.  There is a lot of value to be had here as well.  In fact, if someone was ready to spend a bit of coin and was looking to get into Castles & Crusades, the $199 pledge level is absolutely amazing!  You get the Haunted Highlands material, as well as a copy of the C&C Player's Handbook, the Castle Keepers Guide, the Monsters & Treasure book, Classic Monsters, Gods & Monsters, the landscape CK Screens, and dice!  Fantastic value right there and, if I had the money to spare, I'd buy into that despite already owning all of those books (and a couple copies of certain books to boot).

At first, there were a couple of modest stretch goals which fans busted through within a few days.  The next two modules of the series -- DB7 and DB8 are being included in the compilation (previously unpublished).  The next stretch goal to be met was to have one of the Players Guide be done in hardcover.  This was an $8000 goal but keep in mind that the project initially called for $3000 to do (with no bonuses at all).  This was certainly achievable.  I find the next one a bit 'reaching' though and, frankly it is one that needs to be met.  The next goal is at $12,500 and this is to have the CK Guide for the Haunted Highlands done in hardcover too.

But $12,500 is certainly attainable isn't it?  Well yes but given the past Kickstarters that TLG have done, it doesn't give much of a margin judging by the success of those.  In order, these are what the other ones raised:

The biggest draw was the newest printing of the Player's Handbook with was the first to feature color pages.  For fans of the game, it makes sense that this is the biggest draw.  The fact that one of the bonuses doubled down and gave you two copies at the lowest pledge level for a physical reward (at $40) was really astounding.

The Codex Celtarum book did reasonably well.  It was an entirely new book after all and also featured similar value for your dollar -- $100+ got an extra copy of the book with leather covers.

As for the Classic Monsters book.  I honestly thought it would do better and there was some tremendous value there too.  I think it would do better now and the lower numbers had more to do with it being the first Kickstarter that TLG did.

How does this all stack up?  Well, if we look at the Codex Celtarum, it did well enough but it was also new material and not containing a significant chunk of previously published stuff like the Highlands stuff does have.  The last 'compilation' that TLG did was the Umbrage saga box set at $19.99 which sadly seems to be unavailable anymore in print.  There was some great value in that set and I think it might have been partially what inspired the demand to see something similar for the Haunted Highlands.  At $20, it was a great buy even if you already bought the adventures individually.  However, given that we are talking about some stuff that fans may already own (despite promises of expanded and revised content), this Kickstarter needs to be about value once more.

For my money, I'm not certain I'm seeing much value here  but I have backed it at the $75 level which would get me copies of the Players and CK books, maps, digital copies, a T-Shirt, and a cookbook.  Part of the issue is the unknown shipping costs which will certainly cost me another $20-30 on top of that but will only be resolved *afterwards*.  This is an unknown I'm not sure I'm comfortable with but the Trolls are good about it when dealing with them directly.  However, should the $12,500 stretch not be met, I will likely downgrade if not drop it entirely.  These days, $75 is a significant amount of extra cash and I don't relish the idea of a mis-matched set of books. Interestingly enough, the pledge level for the Players Guide also has the highest number of backers -- likely because of the fact that many fans of the series already own DB1-6.

EDIT: Looking at it again, I misread the pledge levels and got a couple of them mixed up.  The highest number of backers is with the $59 package which is just the two books plus maps.  It is late and I clearly need some sleep.  I still think that more 'new' material would create greater interest so the stretch goals that have already added DB7 and DB8 and, hopefully DB9 will help!

TLG also have higher stretch goals which may or may not be attainable.  I think this crowd funding effort will be hard pressed to get much above $12,500 as they currently stand at just under $9600 with less than two weeks to go.

Past $12,500, you have an easily achievable one for $500 which gives us bigger maps.  At $15000, you have Darlene (the artist for the classic Greyhawk maps from the Folio) who will be doing the maps (very nice but I don't think we'll get there).  At $16,500 you get Fat Dragon to do Dirty Bowbe's Roadhouse available as a 3D model you can assemble from cardstock.  To be honest, I don't even care about this particular goal though I know many who would.

There are promises of further stretch goals that include minis from Reaper and more content (DB9) but not amounts supplied for those as of yet.  I think it's a bit of a moot point since I don't imagine this Kickstarter will do better than the PHB did.  And this is kind of my point.  Given previous Kickstarters, hoping for more that $16,000 is too much of a stretch.

What can we do to change this around?

For starters, Troll Lord Games promised additional pledge levels for leather covers for the Player's Guide should it hit the hardcover stretch goal.  We're still waiting to see these.  The inclusion of this new level may entice backers of the Player's Guide level to 'upgrade' and bring extra funds to the fund.  Oh and while it is important to get the word out, as a backer of the three previous kickstarters, I find it pretty obnoxious to get 4 updates cross-posted in all kickstarters for C&C.  This may be a turn off for some.

Secondly, we backers should try and see about getting friends (who aren't likely to back the KS directly) to see if there are any books they would like.  It might be a golden opportunity to get the $199 package if you have fellow gamers in your group that don't have any of the books but would like them.  Similarly, you can add on a number of additional PHBs, CKGs, as well as the Free City Of Eskadia and either book from the Haunted Highlands kickstarter.  The players guide is a great idea if you are seriously thinking of running a campaign in this setting.

For those of you who aren't C&C fans, the Haunted Highlands can easily be used with other 'old school' games similarly influenced by classic D&D and AD&D.

You can view the Kickstarter HERE.