Well, I was one of the lucky ones and got my Bones Kickstarter a bit sooner than I anticipated so, after a long weekend of sorting my study / studio and finding storage for all the miniatures that will be needing painting in the near future, I finally was able to sit down and get started.

Now I've read some of the tips on the Reaper forums in terms of getting started on these bad-boys and, I had a friend whom I had ordered an extra dragon for (one of the Pathfinder ones) which he got a head start on.  I gave him a few tips I had seen there regarding painting his dragon.  He tried to paint using the base coat straight on the miniature as opposed to doing a primer first.  The paints he was using?  The latest line of Citadel paints.  Reading about Reaper's HD line of paints with the heavier pigmentation, I figured the Base paints from the Citadel (which are also heavier in pigmentation) would probably be ideal.

The thing is he had a devil of a time and, compared to the materials he normally has worked with (metal / resin), he found painting on the bones plastic to be a particular challenge -- one he did not enjoy as much.  As it was described to me, the behavior of the paint seemed to work against him.  He tried using the paint as-is, diluted with water, and diluted with a medium (Liquitex Airbrush I believe) with similar results.  And he did thoroughly scrub and clean before hand.  This was just underneath the base so, after these less than optimal results, he decided to prime it first and then apply the necessary basecoats and what-have-you.

Despite the challenges, it is coming along nicely he tells me.

Now, on my end, I decided to start today and given his difficulties, I decided a different tactic.  Despite what one of the stickies have indicated, I decided that gesso would be the tool I would work with.  I dilute the liquid gesso (1 part water for 4 parts gesso) just a tad to get a better flow.  However, I immediately notice some of the repelling effects but they are minor.  I coat the test miniature and, re-coat as necessary.  This does not take long and, with the way that gesso dries and 'shrinks', it gives it a very nice coat and a perfect surface to paint on.

What I have been dying to try out is shooting the gesso as opposed to brushing it own but I don't know what kind of effect this will result in -- I may have to drop that idea.

If the gesso didn't work, I was going to try and shoot it with a layer of varnish which should also 'nullify' the water repelling effect that's been noted.  One of the advantages of the gesso though may be with any of the 'bendy' parts of some of the bones since I think it has the ability to 'flex' a bit.  Otherwise paint and the gesso underneath it would risk breaking and flaking off.  Between this and a coat of varnish to seal the finished paint job, it should be resilient enough for table-top use.  At least I hope so.  ;)

In any event, here is my first mini with his coat of gesso (and ready for his paint) -- only fitting that it should be Mr. Bones himself: 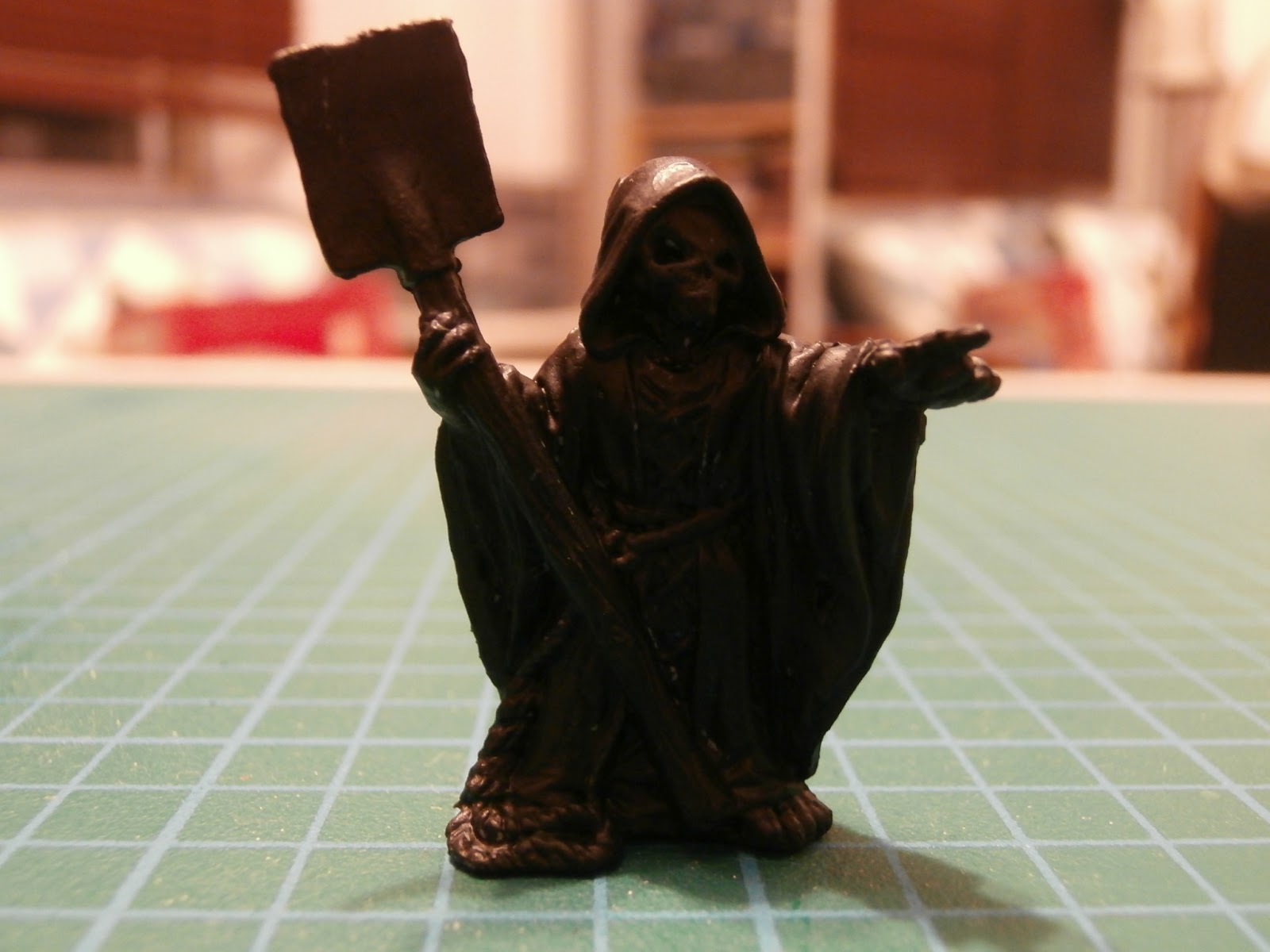