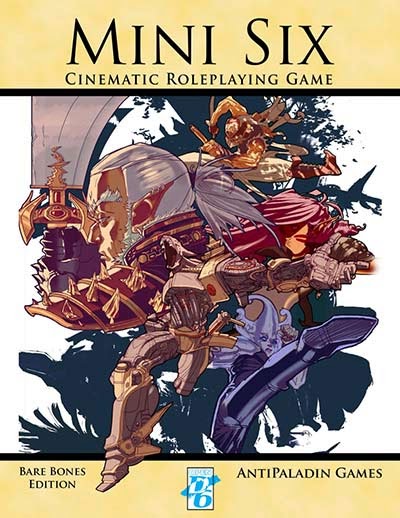 Continuing the trend of playing catch up...


Hmm... number 4 is a bit of an odd one since I already owned the PDF and various game books that basically that predate it.  But in that case, it would be 'Mini Six'.  While I have played and ran different games and systems, one of my favorites was the good old d6 system developed by West End Games.  Their biggest contribution was arguably the Star Wars RPG before the license went to someone else.  The game runs fast and loose and great for a 'cinematic feel'.  It's a dice pool system and is skill based as opposed to archetype and level based.  It easy and fun and you can pretty much run anything with the system.  While West End Games developed other properties, towards the end, the went with 'generic' d6 genre books...  Notably 'Adventure', 'Fantasy', and 'Space'.  There were more but in some ways, between these and a new Space Opera type game called 'Septimus', West End Games never enjoyed the type of success it had back when they were putting out tons of material for the d6 Star Wars RPG.  While West End Games had a turbulent time of things near the end (including change of ownership), one of the last great things they did was create 'Open d6' to keep the system alive and allow anyone to freely develop for it.  Mini Six was one of the best results of this and while I had some of the d6 Star Wars book as well as a generic d6 System book, I only finally got a print copy (from Lulu and sold pretty much at cost).  The PDF of it is free and available HERE.

Most Old School RPG owned?  Well that's a good question.  I figure that most people would answer something like OD&D or an early D&D variation.  If I went that route, I'd probably would say something like the older B/X sets.  However, in many ways my 5th Edition 'Deluxe Black Box' of Tunnels & Trolls.  I actually talk about it a bit HERE.

Finally, my favorite RPG that I never get to play.  Hand down, it's got to be Call of Cthulhu.  I was introduced to the game when their fifth edition was released and was fortunate enough to play some of the Horror on the Orient Express campaign.  That was over 20 years ago now and I haven't been able to play since.  My lack of playing didn't stop me from holding on to my near mint, 20 year old copy.  Nor did it prevent me from picking a couple other Chaosium titles over the years or backing both the new CoC 7th Edition *and* their new Horror on the Orient Express Kickstarters.  Since I can never play, I guess I'm going to have to just run it instead.  But it's just not the same.  ;)