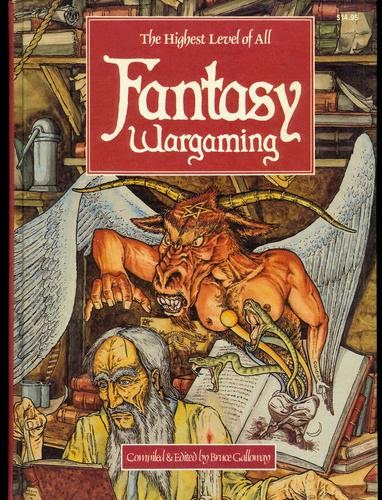 And my quest continues... at least I got more than half done before the last day...  Here's a few more rest of it:

My favorite game system is some sort of flavor of D&D and, for the past 8 years or so, it's been Castles & Crusades.  Why C&C?  Frankly because it retains that 'old school' feel but does away with how certain things were done in favor for the newer d20-inspired unified mechanic.  It's just more streamlined when it comes to the rules but retains its compatibility if I choose to run a classic AD&D module with a very minimum of fuss.  I like that and I will tap into my 1st, 2nd, and classic D&D sources for my C&C games as a result.  Of course, the new D&D has gotten my attention.  ;)

My favorite published adventure, for nostalgic reasons, has to be the Mines of Bloodstone for AD&D.  It was a very high level adventure which could, if things go badly, result in the party going toe to toe with Orcus, Demonprince of the Undead.  It was awesome and bordering on the ridiculous because of the epic level nature of the adventure.  However, the valley of Bloodstone became the focus of the first campaign I ran (in Forgotten Realms) for about five years.

As to what I will still play in 20 years... it will be some sort of D&D based game.  If Troll Lord Games continues to do well, it may still be C&C or maybe Wizards of the Coast will ultimately win me over with a future edition of D&D.  However, I like my dungeons, my dragons, and me level-based archetypal fantasy game play.

On the other hand, my favorite licensed RPG has got to be the ORIGINAL d6 version of Star Wars.  The d6 system (as I have mentioned before) was always a favorite of mine and was also were I sought refuge when I needed to take a break from AD&D.  The d6 Star Wars RPG (2nd Edition) will always be the pinnacle of that system.

My favorite (or best) secondhand purchase is a bit of a tricky one.  I have bought much over the years and really, it comes down to a couple of choices, not just one.  The first that came to mind was the Rune Quest 3rd Edition Deluxe boxed set published by Avalon Hill.  I got it for relatively cheap compared to what I have normally seen it go for and the contents were in very nice shape.  However, the moment I thought about that, I thought back to my Tekumel: Empire of Petal Throne book.  This one item isn't nearly as collectible as other versions (it is the one-volume 'pink' book published in the late 80's) but seeing that there doesn't seem to be much Tekumel out there, I think it's awesome that I was able to find a near mint copy of it.

As for the Coolest looking product / book.  Hands done I have to give it up to pretty to Lamentations of the Flame Princess and the Rules & Magic book they put out.  Frankly all of the LoFP hardcover books are beautiful -- I love Carcossa and the Isle of the Unknown but as good as those were, I really think James Raggi raised the bar on quality with this book.  I can't way to see the second volume (which I will have to order because I missed the Indigogo campaign) when it becomes available.

The most complicated RPG owned... well I've mentioned Palladium before so Rifts immediately comes to mine as far as character generation is concerned.  However, I will nominate 'Fantasy Wargaming' instead.  It isn't necessarily complicated but it isn't really complete either.  You need to put in work to figure out how exactly to run a game with it.  It remains fascinating to look through though.

And with that, I say till tomorrow where I will COMPLETE this blogging exercise.  ;)