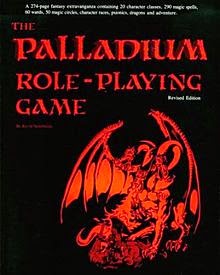 Well, Gen Con was a blast and the weeks and days leading up to it were very busy for me.  The days immediately following it were also busy and I was mostly out of sorts due to all the traveling done and general sleep deprivation.  But I'm back and it's time to get back to the business of blogging, writing, and finally publishing a few things before the year is over.

In the meantime, let's see if we can get this #RPGaDAY thing wrapped up by the end of the month and, as always, I'm playing catch up here:

I find an intellectual game to be an interesting concept.  Most RPGs have the capacity to be intellectual by virtue of imagination.  It doesn't have to be something that's complicated but I suppose the devil is in the details.  Looking and thinking back what I own or have owned, I guess I would have to go with something like Palladium Fantasy.  Not because it is overly intellectual but because it had me thinking about game design more than once when I compared it to Dungeons & Dragons.  That said, most will fine that character generation in games from Palladium are long and needlessly complicated.  ;)

My favorite character is a toss up between two actually.  One was my first character of course, a Fighter that grew to prominence in the campaigns I played.  The other was a Halfling Thief that was in the middle of a pivotal and campaign altering war which he helped bring about.  Fun times!

As to my favorite Die or Dice Set -- I don't really have one.  For a few people, I've seen them select their very first dice set and I really suppose that's as good as an answer as any.  I don't have my original dice set anymore.  However they were special to me for a couple of reasons.  The first is because they were given to me.  When I became involved in the game (AD&D), I was living on a Canadian military base in Germany.  Dice were EXTREMELY hard to come by.  You couldn't just go to a local game store to pick them up.  The place we got our books from (a small bookstore on the base) did not stock dice.  So, when I started, a friend who had a couple of sets of dice he was regularly using gave me some old dice that was included in the Basic D&D set (BECMI series).  Those were my dice.  Within a couple of years with traveling and such, it was a big deal to find a game store in a foreign city and country and, sure enough, when the opportunity arose -- we bought dice.  I had acquired a couple of other sets and, when I introduced another new player to D&D, I gave him the dice that were given to me.  When I think back to that set, part of me hopes that they continue to exchange hands as necessary.  I have my second set of dice still -- they are a multicolor set of solid dice which I have retired in their own tiny pouch amongst the hundreds of dice I have since acquired.