Ballista: How the Base Rules Work 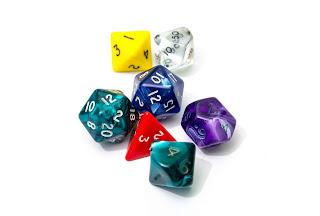 So... you picked up a copy of a Ballista Adventure and you have dice in hand along with some characters. What next? If not using one of the many existing systems compatible with the Ballista line, each module also includes a basic set of rules which can be used instead.

As the rules included in these books are not meant as a replacement for other systems, you won't find rules to create actual characters. Some books in the line will offer some pre-generated characters and there are other online resources that can be used to meet this need. Naturally, characters from any d20 system derived from the world's most popular Role Playing Game such as Swords & Wizardry or Castles & Crusades will easily fit the bill.

Beyond that, if someone prefers to use their favorite system instead, more power to them. Nothing in the line should be an impediment from doing so. Others may wish to mix and match various rules for their own home brew campaign.

The rules included on the inside cover as separated in seven sections. They are How to Use This Book, Attributes & The Game, Understanding the Encounters, Battle, Damage, Bonuses & Penalties, and finally Magic & Miscellanea.

The first section is a simple and basic introduction but the second is far more significant. It covers the six traditional attributes and how to go about deal with saving throws or skill saves. A target number is determining by added a base value and a difficulty level rated on a scale of 1 to 10. A player would roll a d20 plus relevant attribute modifier and character level.

Understanding the Encounters breaks down the stat block and details how each part impacts the game where as the following Battle section quickly covers the order of combat in relation to this information. Damage is the logical continuation of both previous sections and informs the reader on how to proceed.

Of course, anyone who has played a similar role playing game before will already know how all of this works. Even the following section isn't particularly 'new' given the multitude of other systems that use a similar mechanic. Greatly popularized in 5th Edition and utilized to great effect in other games such as Chaosium's Call of Cthulhu (7th Edition), Ballista advocates the use of bonus and penalty dice in the game to avoid stacking additional numbers to a skill, save, or attack roll in a veritable escalation of numbers.

Magic & Miscellanea is a quick and dirty way of running magic without the need of a Vancian-type of, fire-and-forget, spellcasting. The GM will need to determine challenge level, taking into account the scale of the desired effect, which the spell caster will need to roll for in order to success. This taxes the spell caster (in the form of nonlethal damage).

The rules are very basic but, in their own way, complete enough to run a game. They represent an easy set of guidelines that can be used instead of a rule book -- especially if the participants are experienced gamers. In time, a bit more will be offered, if only to provide some interesting options for the campaign YOU want to run.