Ballista: The Ruins of Ramat 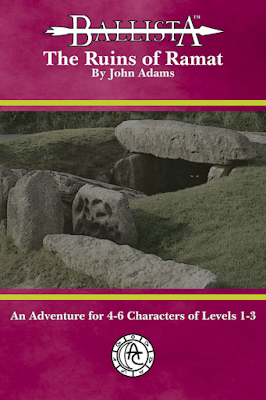 The second in the Ballista Aventures line is The Ruins of Ramat. As far as I know, no other published modules have undergone quite as many versions as this one. In simplest terms it is a, 'by the numbers' module making it a great introductory adventure a quick side adventure which would easily be inserted in an existing campaign. When Brave Halfling Publishing put out this scenario back in early 2009, an 'Original Edition' version was released alongside a Labyrinth Lord version. Brave Halfling Publishing went on to produce a version for Dungeon Crawl Classics  a few years later.

During this time, Arcana Creations produced a version where the map was revamped and expanded for Castles & Crusades in the Fall of 2009 and also produced a PDF version for Swords & Wizardry in 2013. This makes a total of FIVE versions of the Ruins of Ramat.

The Ruins of Ramat has always gotten generally favorable reviews over the years and I've run it more than once for different people. The last time I ran it for a group of newbies, it was also nearly resulted in the party getting themselves killed due to a series of bad decisions and unlucky rolls. I do think it is a solid and fun little adventure and could be the cornerstone to a regular game. The scenario isn't without its criticisms however. While some people appreciate the tone and the fact it is also 'child friendly', this same approach has been met with some people rolling their eyes at the adventure's premise. James Maliszewski from the old Grognardia blog wrote:

One of the nice things about the adventure is that how easily it could serve as a child's introduction to fantasy roleplaying. As presented, the characters are asked by a little girl who's lost her dog to find him, after a clawed creature came up out of the ground of Witch Hill and snatched the canine. Melodramatic though it may be, it's precisely the kind of hook that would grab my nine year-old daughter and I can't imagine she's alone in that regard.

His full review on the Original Edition version can be found HERE.


I am in complete agreement with Maliszewski but I felt that doing a new version for Ballista also presented an opportunity to finally address some of the problems people perceived with the adventure over the years. My solution was to add additional but OPTIONAL content to the new version of Ramat. It can be ran without integrated any of the this optional material and the end result will be true to the nature of the original adventure albeit based on the slightly expanded version previous published for C&C. However, the optional content helps answer some questions and builds on the mythology that was already present in the adventure as backdrop. For instance, it explains how Witch Hill is currently a threat as opposed to just being accessible and yet somehow undistrubed all this time. More importantly, it can lead to a bigger and expanded threat as it casually throws aside the concept of a storybook happy ending involving a child and her dog. The added material is not much but it makes a different and I feel it makes for a tighter story which puts it more in line with some of the sort of material I enjoy running.

It remains a short adventure and, while keeping it to a 6x9 format, we kept the page count to 20 pages by including a bunch of basic, pre-generated characters. Between this, and the basic rules printed on the inside cover of the books, all you need is add some dice and you are good to actually PLAY this adventure without the need for ANYTHING else!

In other words, you can get a game going for you and your group of friends for LESS than $15 USD (covering the cost of this book and a basic set of gaming dice).

My next post will cover more about the layout and the stat blocks used in the Ballista line.