Ballista: The Secret of Ronan Skerry 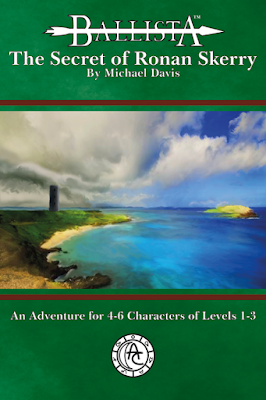 Two nights ago, I started talking about Ballista and basically gave a broad-strokes description of what this new line was going for. Tonight, I'm talking about the first release in the line which helped shape the layout for the rest of the line.

The Secret of Ronan Skerry, written by Michael Davis, was the first Castles & Crusades module I worked on that was released in the summer of 2009 as a Brave Halfling Publishing publication. Originally released as a digest module, it was followed by a full-sized second printing a few months later. Work for the second printing marked the beginning of Arcana Creations. Most copies of the first and second printing sold well initially and remains a favorite of mine when I consider the body of Castles & Crusades adventures now available today. It only seemed fitting that the first title in the Ballista line would be this one.

The adventure itself takes place on an island and is largely overland and geared towards a party of lower level characters. In it, the party is called upon to investigate the disappearance of a group of monks who man the lighthouse on the other side of the island. It's a simple, fun, and very well done and had the distinction of being very well written making it a great choice to iron out the details with the layout. It is also not a very well known adventure scenario since it was done first with specifically C&C in mind. I'm really hoping that the new line will give this title renewed interest

This book as well as the rest of the line is in a 6x9 inch format book. So it's a bit bigger than a digest sized module but smaller than a regular sized adventure module. Page count for this book is 20 pages which matches the page count of the full sized version originally made for C&C but much smaller than the 32 page digest book originally released. The biggest difference between this version and the full sized C&C version is the Appendices that have been cut from the C&C version. The text of the scenario is essentially the same (save for minor editing). This format makes using an electronic version on a tablet ideal. A 7 inch tablet is serviceable with an 8 inch tablet being great.

Regarding the 'cut text', since the Ballista format is both generic and simplified, there is little need for extraneous fluff text or gaming crunch tailored to any specific game system. This helps keeping the page cut down in a smaller page version of the scenario. The quick rules included to play this adventure (as well as all Ballista Aventure releases) are included on the inside cover of the module. But I'll go into detail of these rules as well as the stat blocks and layout in another post before the launch of the Kickstarter.

The retail price for this module is $12.50 CDN which works out to about $10 USD. Pricing will be better during the Kickstarter campaign as well. All modules are printed in Canada at a local printer I have worked with for about a year now.