Ballista: A Trick on the Tain 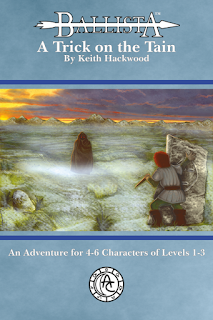 The third adventure in the Ballista Adventures line is A Trick on the Tain.  Like the first two, this was a module originally published for Castles & Crusades and this version has also seen changes between that version and this new Ballista version. Where as the Skerry scenario was primarily a local-area overland scenario, and Ramat was primarily a dungeon scenario, A Trick on the Tain takes place over a broader region and can be classified as a wilderness adventure. In this case, the adventure takes place in the tundra.

As a location-based adventure, there is enough material and ideas in the pages of the module to get you going but it also leaves plenty of room for a creative GM to flesh out. The region could easily become the home of many other adventures as the players explore this wilderness. James Maliszewski from the old Grognardia blog had this to say about it when he reviewed the original C&C version back in 2010:

It's also a good example of the old school design philosophy, leaving many aspects of the adventure open to referee interpretation rather than providing a definitive answer to every question that's likely to arise. I appreciate that and think it only adds to the module's utility, although some will no doubt disagree, expecting a published module to be completely self-explanatory.

His full review on the original C&C version can be found HERE.


He did go on to say that he didn't think it would have as broad of an appeal to everyone but I do believe it is an underappreciated gem. It was also a gem that was still a bit on the rough side that got a Swords & Wizardry conversion done for it a couple years back.

In preparation for this new version, a new round of edits where made. Material that was at the end of the module and the appendix was cut for this version. However, all that material critical to the actual core of this adventure has remained. It is my hope that we will revisit this region and expand on the material in the near future.

At this point, there are two more titles I want to present which are unpublished adventure scenarios which, along with the three already discussed, will be part of the upcoming Kickstarter launching this weekend! Expect a post about those two in the next day or two.